With Millions Out of Work, the Trump Administration Pushes to Limit Food Stamps

A sign noting the acceptance of electronic benefit transfer (EBT) cards that are used by state welfare departments to issue benefits is displayed at a convenience store on Dec. 4, 2019 in Richmond, Calif.
Justin Sullivan—Getty Images
By Abby Vesoulis

Amid a global pandemic that has rattled the United States economy and led to record-breaking job losses, the Trump Administration is continuing to push to restrict access to the nation’s largest food assistance program.

On Tuesday, the U.S. Department of Agriculture quietly issued a notice that it was appealing a judge’s injunction that blocked the cabinet agency from proceeding with cuts to the Supplemental Nutrition Assistance Program (SNAP), colloquially known as food stamps.

If the USDA wins its appeal, the new requirements would strip 688,000 Americans of their food benefits, according to Department’s own estimates. In March, Congress passed legislation that temporarily paused limits on how long most SNAP recipients could receive benefits without working for the duration of the COVID-19 public health emergency. Thus, if the USDA is victorious in its court challenge, the stricter work requirements would be temporarily delayed until the public health emergency was over—but that may be long before the economy rebounds.

For decades, SNAP has limited most able-bodied, childless adults between 18 and 49 to receiving three months of food stamps within a three-year period, unless they work or are in a work-training program for at least 20-hours per week. But states could grant waivers exempting places with higher than average unemployment from the time limits individuals could stay on SNAP without satisfying the work requirements. Over the last 22 years, every state except Delaware has used these waivers to help residents get access to food, according to the Center on Budget and Policy Priorities.

On April 1, the USDA was ready to change the rules. It was going to start requiring states to meet a higher benchmark before they were permitted to issue waivers exempting jurisdictions from the time limits an able-bodied adult with no dependents could stay on SNAP without working. Under the new order, states would have to prove that a region’s average unemployment rate was 6% for the preceding 24-month period, on top of it being at least 20% above the national average.

“We need to encourage people by giving them a helping hand, but not allowing it to become an infinitely giving hand,” Secretary of Agriculture Sonny Perdue said at the time, explaining the rule change.

In mid-March, a federal judge issued an injunction on the rule, stating that aspects of it were “likely unlawful because they are arbitrary and capricious.” The coronavirus was more reason to block the policy change, she wrote: “Especially now, as a global pandemic poses widespread health risks, guaranteeing that government officials at both the federal and state levels have flexibility to address the nutritional needs of residents and ensure their well-being through programs like SNAP, is essential.”

The judge’s argument was prescient. In the weeks that followed, states saw surges in the number of people applying for the program: Nearly 12,000 Ohioans signed up for SNAP during the first week of March, a spokesperson for the state’s Department of Jobs and Family Services previously told TIME. During the second week of April, 29,334 more signed up. The number of Washington state residents who applied for SNAP during the first full week of April 2020 was also more than double what it was the corresponding week last year, a state employee said. Food banks saw the need for their assistance skyrocket too: miles-long lines of cars seeking donated groceries made their rounds on the internet, while nonprofits like the Central Texas Food Bank said demand for its services in Austin increased 207% in just a few weeks’ time.

The USDA could not immediately be reached for comment.

Rep. Marcia Fudge, the Chair of the House Agriculture Subcommittee on Nutrition, Oversight and Department Operations called the USDA’s effort a “cruel pursuit of unrealistic policy.”

“The Administration has decided that now—amid the most pervasive need in a century—is a great time to crack down on Americans who rely on food stamps to keep their families from going hungry,” the Ohio Democrat said in a statement provided to TIME. “Congress is investing more in this program so that we can meet the challenge before us.”

“If they had any decency or compassion, they would abandon this appeal immediately,” Fudge added. 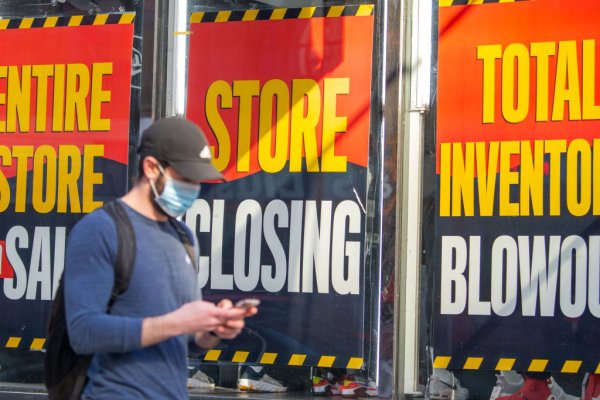 Inside One Firm's Coronavirus Loan Struggle
Next Up: Editor's Pick