As much of the world continues to socially isolate to help prevent the further spread of the coronavirus, a herd of some 200 goats has broken out from where they were sheltering in place.

The goats were being kept in a holding pen in a San Jose, Calif., neighborhood, but somehow broke through an electric fence to make a run for it, Terry Roelands told KNTV. The goats are regulars in the neighborhood, as Roelands plays host to them for a few days each year. He reportedly invites the herd to come eat the brush to clear it on a hill behind his house in a bid to prevent fires.

Usually the fence holds, but this time the goats managed a jailbreak, knocking down the walls of their pen and pouring onto the streets of the neighborhood. They made for an unexpected sight that was captured on video by Roelands’ son, Zach.

“I’m dead,” Zach tweeted jokingly. “When I got back from the store all the goats had broken through the fence and were [wreaking] havoc on our street.” In the video, which was shared on social media by the younger Roelands, the goats can be seen running down a road and seemingly having the time of their life.

It’s nearly impossible to watch the video without humming a few bars of Queen’s hit, “I Want To Break Free” as the goats make a dash for it. “This is the craziest thing to happen all quarantine,” Zach added in his tweet.

Sadly the goats’ mad dash for freedom did not last. Zach told The Mercury News the goats were rounded up quickly. They did make the most of their time out of lockdown, though, turning the neighborhood’s potted plants into an all-you-can-eat buffet.

These are not the first goats to make the most of this climate—a herd of mountain goats took over the town of Llandudno, Wales much to the amusement of its residents. 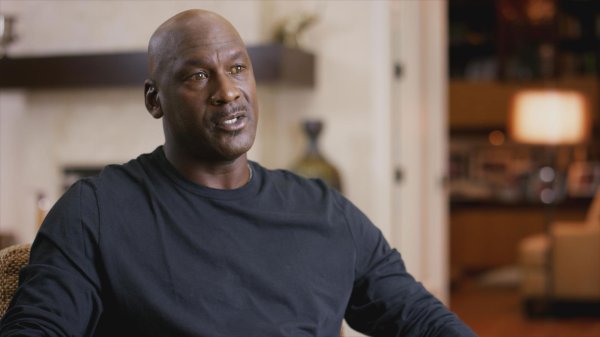 Michael Jordan Gets the Last Laugh With the Versatile Laughing Jordan Reaction Meme
Next Up: Editor's Pick