The Coronavirus Baking Boom Has Made It Hard to Find Flour. Here’s How Americans Coped With ‘Wheatless Wednesdays’ in WWI

As the Coronavirus pandemic continues to sweep across the globe, many Americans confined at home have enthusiastically turned bread-baking into the de facto new hobby of social isolation. To many contemporary commentators, the rush on flour is a sign of the need for structure and comfort in these increasingly unstructured and uncertain times. Indeed, the zillion images of sourdough posted on Instagram in the past few weeks would seem to suggest the appeal of a fresh baked loaf is universal. As Zoe Williams writes in The Guardian, “Baking gives your day a structure, and fills the bizarre acreage of time that some of us have with manageable yet important waypoints: perhaps you have to wait for four hours for your sourdough to prove, but at least those four hours have a beginning and an end.” Baking, reiterates another chef quoted in TIME, brings people “a little bit closer. That’s why it seems so popular.”

This particular form of self-care, however, has taken flour millers and grocery retailers by surprise. Whether virtual or in a store down the block, store shelves throughout the country are seeing a severe shortage of flour. While this absence is not due to a physical lack of flour at the moment—the food system is simply not equipped at the moment to handle this much at-home baking, as most flours are sent to commercial bakers or restaurants—it has nonetheless triggered more panic buying and left even fewer bags of flour available for those looking to bake their daily bread. This is certainly an unprecedented moment for Americans in the 21st century—but mention the phrase “flour shortage” to any American baker in 1917 and they wouldn’t even flinch.

Ever since the United States had entered the First World War in April of that year, control over the nation’s wheat supply was high on the federal government’s priority list. Declaring that “food will win the war,” in August of 1917 Congress passed the Lever Act, known more commonly as the Food and Fuel Control act, which granted the government unprecedented control over the U.S. food supply and established the U.S. Food Administration. Headed by financier-turned-food-aid-specialist (and future President) Herbert Hoover, this new agency’s charge was to organize food supplies at home while ensuring there would be enough to feed both American troops and the Allies abroad. And central to this mission was bread.

A longtime staple of working-class diets in much of the world, a loaf of bread was—and still is—a potent symbol in Western Europe. Beyond simply the nourishment bread could provide, bread was assumed so essential as to be the basis of Western power itself. “White flour, red meat, and blue blood make the tricolor flag of conquest,” remarked Wood Hutchison in a 1906 edition of McClure’s Magazine, a statement that echoed a belief of the era that the “white races” of Europe could not survive long without ample supplies of wheat bread, a staple on the Continent since the time of Roman “bread and circuses.”

Which meant it was a real problem that there was no longer enough wheat bread to go around. The division of the world into Allied and Central Powers had fractured existing trade links, while fields of grain throughout Europe and into the Middle East had been replaced with battle fields pocked by mortar fire. As the fighting in Europe raged on, many civilians were starving. And, although an ocean away from these front lines, American grain producers were already reeling from an incredibly low production year in 1917—down to 650 million bushels as compared to a billion just two years before. The ravenous demand from abroad caused wheat prices to skyrocket and a domestic shortage to ensue.

Knowing full well that high bread prices would not be a good thing—New York’s Flour Riots in 1837 and Richmond’s 1863 Bread Riots being two domestic examples of what could possibly go wrong—President Woodrow Wilson’s Administration rapidly set about stabilizing wheat prices and simultaneously encouraging Americans to “Eat Less Wheat.” Emphasizing that maintaining the Allies’ supplies of “war bread” was “a military necessity,” the U.S. Food Administration and its growing ranks of home economists recommended Americans limit their consumption to just “one and one-half pounds of wheat products” each week—the equivalent of roughly one and a half loaves of bread and just 50% of the average American’s normal consumption. National “Wheatless Wednesdays” were declared, a proclamation adhered to with varying degrees of patriotism by restaurants and at-home cooks alike. Other meals throughout the week, 11 in total, were labeled by the Food Administration as wheat-free, and bites of bread in between were meant to rely on a significant proportion of white-flour alternatives such as oatmeal, cornmeal, rice flour, potatoes, barley flour and buckwheat flour.

To help these substitutes go down a bit easier, the cooks of the Food Administration began churning out recipe after recipe of America’s favorite dishes, this time without the wheat. Cakes were to be made with potato flour, macaroons with oatmeal and scones with maize. For those wanting to bake a simple loaf of bread, that loaf could no longer be made with 100% white flour. While these regulations were not strictly enforced for at-home cooks—Hoover believed that “the spirit of self-denial and self-sacrifice” would compel Americans to follow these regulations, which many did—by 1918 professional bakers were mandated to use no less than 20% of these wheat substitutes in their so-called “victory bread.” For those feeling “15% more patriotic,” as one food administrator declared, there was the even-more-wheatless “war bread,” comprised of up to 40% substitutes (primarily potato flour).

Although nearly half of America’s 24 million families signed pledges to “Hooverize” by the end of 1917, not everyone was happy with the new rationing regimes. Fears over an impending national epidemic of “gastronomical distress” caused by wheat substitutes were widespread enough to prompt official responses from local and national conservation commissions; “there is no reason why people in this country cannot use the wheat substitutes to make wholesome, easily digested foodstuffs,” declared one home economist in response. Even those without intestinal issues began to balk under the perceived austerity of such regimes, including the wordsmith who penned the following:

But in spite of all the grumbling among bakers and the occasional poet, the wheatless Wednesdays achieved their desired effect. By the end of the war overall American food consumption had declined by some 15% and, between 1916 and 1918, the U.S. government reportedly shipped 7 million tons of food to its armies and allies. These shipments included some 1 ¼ billion bushels of cereals and cereal grains, which primarily comprised the coveted wheat.

Although the supply-chain issues behind the COVID flour shortage appear to be slowly correcting themselves, signs of an actual global grain shortage are mounting. U.S. wheat plantings are at historic lows, international markets are fraught with increased hoarding and rising prices, and the general disorder caused by the pandemic is slowly lurching the world towards ever larger food crises. Whether these effects will eventually hit a flour mill near you remain to be seen, but one lessons of World War I remains: even without their favorite flour, bakers can find a way to give us each day our daily bread.

Emelyn Rude is a food historian and the author of Tastes Like Chicken: A History of America’s Favorite Bird 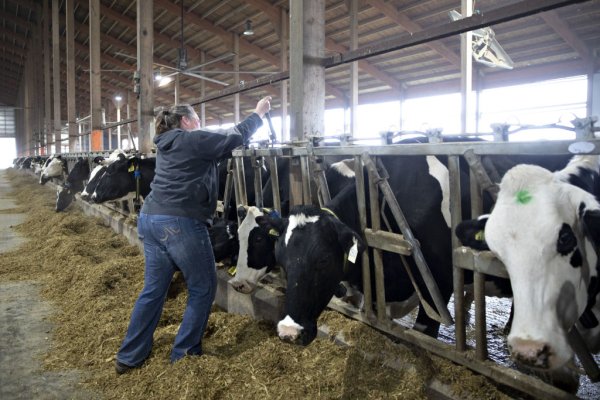 Dairy Cows Are Being Sent to Slaughter as Demand for Milk Plummets
Next Up: Editor's Pick