While police largely left the packed bars alone, when it came to activists, they aggressively enforced a coronavirus-related restriction on gatherings of more than eight people, arresting more than 200 people on Sunday alone.

Pro-democracy lawmakers said it was increasingly clear that police have a double standard when it comes to enforcing the ban on large gatherings, and are using the remaining distancing restrictions to try and prevent the return of anti-government demonstrations, while largely allowing other groups to gather with impunity.

“It’s quite blatant that the police are selectively exercising their powers to use the ban of gatherings of eight people to suppress protests rather than to promote social distancing,” said opposition politician Fernando Cheung. “Many large congregations in front of bars or in shopping areas were tolerated, while congregations related to protests are quickly being declared illegal and people are ticketed or arrested. Such selective practice of law enforcement will only further anger Hong Kongers.”

The government is attempting to get Hong Kong back to normal from the depths of a recession that began well before the pandemic. The violent unrest that started last year kept tourists away and hurt businesses — particularly retail, hotels, restaurants and bars — and many pro-establishment politicians worry renewed unrest will hamper the city’s much-needed recovery. On Friday, officials eased a ban on gatherings — with groups of eight people now allowed, up from four previously — even as protesters began reemerging.

The Hong Kong Police Force said Monday that protesters “ignored warnings” to disperse and said any group gathering could increase the risk of spreading the virus. On Sunday, they arrested 230 people for unlawful assembly and a range of other offenses, including assaulting a police officer. Officers also issued fixed penalty tickets to 19 people for violating the gathering ban.

“Members of the public are advised not to participate in any prohibited group gathering,” the force said in a statement. “Police adopt zero tolerance against any violation and will take strict enforcement action.”

Since the outbreak, Hong Kong has successfully contained the virus’s spread — allowing restaurants to remain open and only briefly closing bars — even as cities around the world shut down almost completely. Yet despite leader Carrie Lam’s successes in containing the virus, recent arrests of prominent pro-democracy figures have raised the ire of resurgent protesters.

Beijing’s two main agencies overseeing Hong Kong have also argued for a greater role overseeing the city, while Lam and other pro-establishment politicians push for a controversial national security legislation and a law that would make it illegal to disrespect China’s national anthem — moves that would likely spark more unrest.

The tumultuous weekend, which followed scuffles between lawmakers in the city’s Legislative Council Friday, highlighted how deep divisions and political instability remain key concerns for Hong Kong going into a key election for the body in September. It could also fuel protesters’ concerns that social distancing measures enacted to contain Covid-19 will be used to keep them from gathering over the summer, after rallies all but disappeared amid the pandemic.

Over the weekend, hundreds of protesters gathered in malls across Hong Kong, chanting anti-government slogans and singing protest songs, with the largest on Sunday in the dense Mong Kok neighborhood on the Kowloon side of the city’s harbor. Some tried to light garbage bins on fire, but were quickly dispersed by police.

Some journalists covering the chaos were pepper sprayed, according to the South China Morning Post.

The new round of demonstrations came after several other smaller rallies in recent weeks, leaving many in Hong Kong to wonder if this summer will see a repeat of last year’s months of unrest, which began in June over a now-dropped bill allowing extraditions to China and grew to include calls for greater democracy.

Hong Kong reported only three new coronavirus infections Sunday, all of them imported including from a recent repatriation flight from Pakistan, for a total of 1,047 confirmed cases. It hasn’t recorded a locally transmitted case for more than 20 days, and last saw a Covid-19 related death in mid-March. Still, its economy doesn’t have the scope to handle renewed protests that could interfere with the recovery, Financial Secretary Paul Chan wrote in a blog Sunday.

“The epidemic can be prevented and controlled, but violence is hard to stop,” Chan wrote. “In recent days, crowds and conflicts have reappeared in some areas, and even interfered with the operations of shops or malls. This is absolutely bad news for the already-weak Hong Kong economy, retail market, small shops and wage earners.”

— With assistance from Natalie Lung. 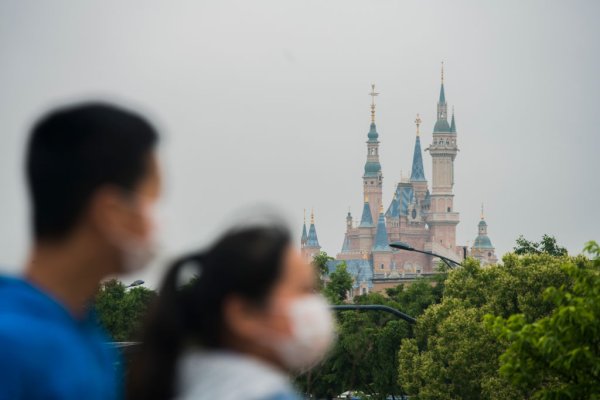 Shanghai Disneyland Tickets Sell Out in Minutes
Next Up: Editor's Pick