Demonstrators raise their fists at a parade of passing motorcyclists riding in honor of Ahmaud Arbery at Sidney Lanier Park on May 9 in Brunswick, Georgia. Arbery was shot and killed while jogging in the nearby Satilla Shores neighborhood on Feb. 23.
Sean Rayford / Stringer
By Tara Law

JAY-Z’s entertainment company, Roc Nation, joined civil rights lawyers and other artists in penning an open letter to Georgia elected officials on Sunday, calling for justice in the death of 25-year-old Ahmaud Arbery. Arbery, an African American man, was shot and killed while jogging in Glynn County, Ga., in February.

The letter was published as a full-page ad in the Atlanta Journal-Constitution, and was signed by Shawn “JAY-Z” Carter, Alicia Keys and Mario “Yo Gotti” Mims, as well as Robert “Meek Mill” Williams, a rapper who has become a prominent face for the criminal justice reform movement, and civil rights lawyers Lee Merritt and Benjamin L. Crump. The artists and lawyers called upon Georgia Gov. Brian Kemp, Attorney General Christopher Carr and District Attorney Tom Durden to ensure that the two white men who have been arrested and charged with murder for Arbery’s death, Gregory and Travis McMichael, receive a “fair trial.”

“By now, we’ve all seen the crime’s disturbing video, so the facts here are not in doubt: He was unarmed and innocent and the victim of a hate crime,” the letter said. “Which is why we call upon you today, as official leaders of the Great State of Georgia, and with the entire world watching, to ensure that a fair trial is conducted, as that can only lead to the appropriate felony convictions of both McMichaels.”

The artists join a chorus of outrage about the circumstances of Arbery’s death and the state’s failure to prosecute the McMichaels until months after the shooting, which happened after disturbing video footage of the shooting was posted online. Protesters gathered in Georgia and elsewhere, with some demonstrator wearing masks to limit the spread of COVID-19, calling for justice in the case. Public figures have expressed their own outrage, with Atlanta Mayor Keisha Lance Bottoms describing the incident as a “lynching” on Sunday.

The open letter in the Journal-Constitution called upon the officials to charge the man who filmed the shooting, William Bryan, as an armed accomplice in the incident, and for District Attorney Durden to recuse himself from the case. The letter said that Durden has a “clear conflict of interest” because Gregory McMichael is a former police officer.

“As a society, we can no longer pretend that the racial inequalities, which exist in every facet of our lives, don’t invariably lead down the path to poverty violence and death. To even think about breaking this cycle we need you to protect the process and preserve the fairness of the trial,” the letter said.

Roc Nation also tweeted a photo of Arbery with his mother, Wanda Cooper-Jones, and noted that Arbery was born on Mother’s Day.

“We are thinking of you on this Mother’s Day as we continue to fight for justice for Ahmaud,” the tweet said, addressing Cooper-Jones. 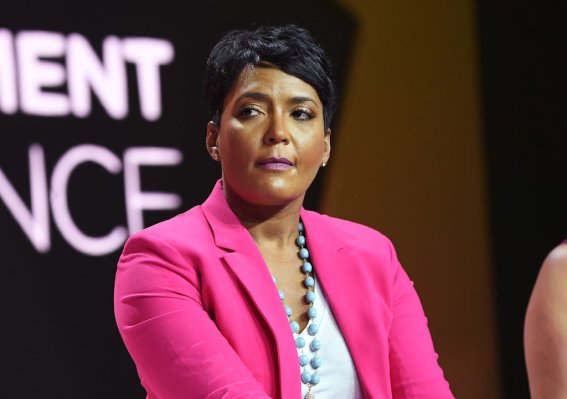 Atlanta Mayor: Arbery Shooting 'Was a Lynching'
Next Up: Editor's Pick