Americans Are Desperate to Go Back Outside. Can Rationing Access to Parks and Beaches Make That Safer?

Thousands of beach-goers enjoy a warm, sunny day at the beach amid state-mandated stay-at-home and social distancing mandate to stave off the coronavirus pandemic in Huntington Beach, CA, on April 25, 2020.
Allen J. Schaben — Los Angeles Times via Getty Images
By Chris Wilson

For weeks on end now, much of the country has endured a kind of home-bound miasma that the poet William Carlos Williams once described as a “sluggish, dazed spring.” But as warmer temperatures arrive and many states cautiously reopen public spaces, thousands of stir-crazed Americans are flocking outdoors. Last weekend, images and reports of glutted beaches and parks have spurred several governors to roll back access to parks and shorelines for fear of a surge in new COVID-19 infections. At a certain point, it becomes physically impossible to pack so many people into six-foot intervals.

As summer approaches, and demand for outdoor recreation skyrockets even further, public space stands to become what economists call a “common resource” — something that belongs to no one, like fish in a lake, but can be depleted without a form of rationing. Already, New York City Mayor Bill de Blasio said Thursday that the virus-stricken city may limit entry to some parks.

“Space is now a resource that, in the foreseeable future, we’re going to have to ration in a way we’ve never had to ration before,” says Clemson University economist Michael D. Makowsky. “The outdoors used to be an inexhaustible resource. Human beings now require a lot more volume than they used to.”

As unattractive as the idea of rationing physical space might be, it may be the best way to ensure equitable and safe access to public spaces without risking the further spread of COVID-19, which has already resulted in 75,000 deaths in the U.S. alone. There are several ways such rationing could take shape as an alternative to blanket closures that many states still have in place.

The first and simplest approach would be to limit access to public places, like parks and beaches, based on some form of lottery. On Mondays, for example, Yosemite National Park might be closed to families in which the head of household had a driver’s license number ending in a 1 or a 2. On Tuesdays, on 3 or 4, and so forth — effectively reducing the potential crowd by 20%.

This strategy is not without precedent in modern industrialized nations. In 1989, in an effort to curb vehicular emissions, Mexico City officials instituted a policy called Hoy No Circula, or “No Circulation Today,” in which personal and commercial vehicles were banned from the roads for one day a week based on the last digit of their license plate.

The environmental results there, as well as in other cities across Latin America and China that have replicated the idea, have been disappointing. Crucially, however, compliance in Mexico City was extraordinarily high, given the ease with which prohibited vehicles could be spotted. One explanation for the idea’s failure to reduce emissions is that, rather than transition to public transportation for one day a week, many residents purchased a second car or just took a lot of taxis.

For a similar rationing of outdoor spaces to be feasible, it would need to meet two critical requirements. First, it would need to be sold to the public in a manner that encourages widespread cooperation. It would also require a safe and tolerable means of enforcement for those who don’t cooperate — one that doesn’t involve excessive fines, especially with so many millions of Americans out of work.

“Any time you try to ration something, by definition you’re punishing un-permitted usage,” Makowsky says. “If we’re not willing to tolerate the punishment, then you have to stick with the original ban.”

A second strategy could involve issuing permits for controlled spaces with discrete access points that can be sold or exchanged. It’s another idea that has already been tested in environmental policy — specifically, the “cap and trade” system, which created a marketplace for companies to buy and sell emissions permits while attempting to incentivize emissions reductions.

In the case of space rationing, an analogous policy would aspire less to incentivize isolation than to fairly distribute the limited resource of open areas. Under such a framework, cities would issue free permits to all residents to be used for access to the most popular parks, beaches and other coveted public areas. A person could choose to sell unwanted permits, or trade them for a different kind of permit (to a different park, or for a different day, and so forth.) This strategy would likely be most palatable for places that are not considered universal public resources, like national parks, but are highly desirable locations, like South Beach. “I don’t think we tend to think of South Beach as an inalienable right,” Makowsky says — though Florida sunbathers may disagree.

Naturally, one worries that such a system would quickly exacerbate the economic divide that the coronavirus outbreak has already exposed and deepened, given that those who are financially struggling would have a greater need to auction off their permits. Though it may require some trial and error as a permit market stabilizes, restricting access to only the most in-demand areas would ideally leave sufficient green spaces open to anyone, permit-free. Like any exchange, cities could chose how to regulate trading — for instance, by limiting the number of passes that any one person or family can buy or sell.

Still, says Makowsky, giving people a new commodity that they can choose to sell could be a way to “set up a transfer of wealth,” putting extra money in the hands of people in need. While one couldn’t institute such a policy on the streets of New York City, he says, “tradable permits could actually work really well for Central Park.”

A third option would be to impose new taxes on certain privileges that are currently shut down in many parts of the country, like dining in at a restaurant. “If ever there was a time for a dine-in tax, it’s now,” Makowsky says. Such a tax could be proportional to demand, with higher levies on weekends and other peak times, he says.

Of course, such a tax could put restaurant visits further out of reach of struggling Americans. To compensate, the revenue generated would need to be divided between the struggling establishments, many of which have had to slash their payroll, with another sizable portion going directly toward programs aimed at helping those in need, regardless of where they eat. While a new tax on dining in is no one’s ideal, it could help restaurants stay in business and rehire staff that is presently furloughed. “It’s got to be considerably better than staying shut down,” Makowsky says.

Any experiments in rationing public space ought to begin with those that require the smallest change in existing infrastructure, Makowsky says. For places like national parks, which have controlled access points and existing gateways, verifying a permit or valid license is theoretically feasible. For beaches that don’t have limited, discrete access points, officials will need to find some other means of limiting capacity, given that deputizing hundreds of enforcement officers could potentially create a new class of super-spreaders if any became infected. “You don’t tax the beach,” he says. “You tax the parking lot.”

And for any of these ideas to work, we would need widespread social acceptance of their unfortunate necessity, such that some social stigma would be associated with non-compliance. This is already apparent in the willingness of many to wear some form of face mask in public, even in places where one is considerably farther than six feet from anyone else.

“The real reason we don’t want to be seen in public without a face mask is because of the shame,” says Christopher Annear, an associate professor of anthropology at Hobart and William Smith Colleges who has conducted years of fieldwork in northern Zambia. “But there is also power in the symbol of the mask. We live lives of such affinity. In wearing a mask, you are projecting an image. It communicates a broader sense of membership.”

Makowsky agrees that self-enforcement remains critical. “All the rationing schemes are going to be really dependent on social norms and stigma,” he says. One can’t invent a social norm on the fly, and there’s often tension as norms within a society begin to shift — to the point that even the President and the Speaker of the House have different personal policies on whether to be seen in a mask.

Admittedly, none of these options sound attractive on first blush. But moving forward in a safe way is dependent on re-anchoring our expectations for the foreseeable future based on present conditions, not those that existed six months ago. Without some mitigation, a premature reopening of businesses and public spaces stands a high risk of reversing the considerable progress many states have made in curbing the rate of COVID-19 transmissions. Without some form of spatial rationing, we’re stuck between either a long period of continued isolation or alternating periods of freedom and panic as hasty reopening leads to resurgent waves of infections. The new normal may never fully resemble the old one, but it needn’t resemble the present indefinitely. 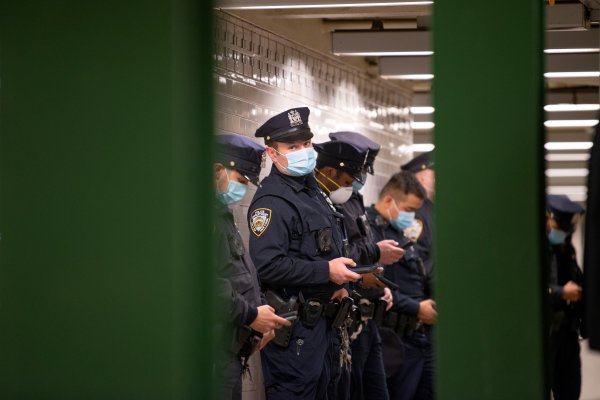 'We Cannot Police Our Way Out of a Pandemic'
Next Up: Editor's Pick