We Understand Why We Have to Miss Commencement. But Here's What We Lost in the Abrupt End to College

This spring, for the first time since World War II, there will be almost no in-person graduation celebrations in the United States. Universities swiftly acted as coronavirus spread across the country: students returned home early, classes moved online, and graduation ceremonies became a public health hazard.

Later this month, former President Barack Obama will deliver a commencement speech to the nation. Earlier, thousands had called for the former president to give a graduation speech, seeking guidance and comfort in this unprecedented time.

It’s hard not to miss real commencement. Days before we evacuated campus, we’d turned in our senior theses, anticipating graduation and the last days of campus life. For months, our social lives had been confined to libraries and academic meetings. “We’ll hang out after,” we’d said. Instead, we packed our bags, said numb goodbyes, and fled to separate parts of the country.

Though commencement speeches are often riddled with trite remarks (Don’t be afraid to fail! Follow your dreams!), we admit we find ourselves craving those clichés and the moments when speeches rise above them today, as we are locked out from a tradition connecting hundreds of classes before us. Obama’s televised address will join a line of commencement speeches delivered by the likes of John F. Kennedy, Oprah Winfrey, and Steve Jobs, many of them given during periods of national and global crises. This year’s speeches, however, will take an entirely new form.

In 2008, J.K. Rowling delivered the Harvard commencement address, defending the importance of perseverance and imagination: “We do not need magic to change the world, we carry all the power we need inside ourselves already: we have the power to imagine better.”

Rowling’s speech, like many others, gave a sense of agency over our lives. These messages, experienced together, propel graduates into the future, helping them recognize who they are becoming and how that squares up with who they want to be.

For the Class of 2020, our college experience has ended abruptly. To make matters worse, we’re plunging headfirst into a public health nightmare compounded by potentially the worst recession since the Great Depression. Some of us will be the first in our families to graduate from college. Many have overcome other great barriers to achieve this milestone. But as the “real world” knocks on our door, we crave nothing more than a little direction and a little tradition.

Though these speeches gesture toward the future, they also commemorate the last four years. “I always wanted first to say we notice that you were here,” former Harvard president Drew Faust told us in describing what she wanted to accomplish in a Commencement speech. “You’ve mattered here, and we know that you’ve been here, and there are things that we shared together during these years that make you not just yet another class of students.”

The commencement speech serves as a distillation of college: four years of laughter, tears, triumphs, and failure condensed into one ceremony. Through language, the tradition offers a bridge into the adult world.

We use rituals to mark entry into new chapters of life. For graduating college students, commencement speeches — the punchy one-liners, inspirational anecdotes, and calls to action from celebrities, entrepreneurs, and politicians — are a rite of passage. Together, we seek to arrive at some sense of what the last four years have meant. In these final moments, we recognize that we influenced our schools as much as they influenced us. We belonged here. We mattered.

This year, students won’t put on caps and gowns and listen to celebratory speakers. Curbing the pandemic requires that we all do our part. The decision to send students home and cancel or postpone in-person commencements has saved the lives of students, professors, faculty, and staff.

While virtual commencements are all many of us can have in this time, watching these moments through two-dimensional screens, thousands of miles apart will be different. Postponed ceremonies will be different, too. We won’t all be in the same era of our lives: excited, scared, hopeful during the bittersweet end of college.

But that doesn’t mean they won’t mean anything. “For some campuses like ours, students were away on spring break,” University of Virginia president James Ryan said in an April interview. “They didn’t have four or five days to say goodbye. So, for many of them, this will be the first time they’ve seen each other since March… I think it will be a remarkably special occasion.”

And he’s right: we’ll all be together again, some time when things are better. We’ll listen to speakers reflect on these months in quarantine and the months ahead. Once more, we will sit on library steps, fill quad lawns, and take in each other’s company. As the curve flattens, there is hope of return.

On our last day on campus, March 15, two of our friends geared up for a 16-hour drive to Michigan. We gathered around their rented minivan to say goodbye. They pulled away from the curb, then pulled back in, as if we didn’t really have to leave each other. Finally, they left the parking spot, driving off campus and disappearing into the world. We held each other close, hopefully not for the last time. 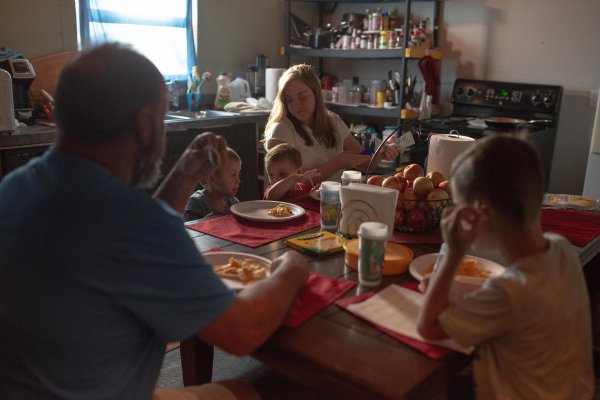 Millions of Americans Facing Financial Ruin
Next Up: Editor's Pick