I Had Severe Insomnia Long Before the Pandemic. Here's What I've Learned From Those Sleepless Nights

I dreamed a while back that Boris Johnson had died. In the dream I felt sad, and when I woke I felt glad that I’d been sad, that my compassion had extended to someone whose values I don’t generally share. I went back to sleep and dreamed that my partner had been cut in half lengthways by a Cylon. I woke and my feet were tingling with sorrow. I went back to sleep and woke later to silence.

There is no doubt that things are perturbing and peculiar. In the U.K, the sense of threat and uncertainty closed in when the Prime Minister went into intensive care, as if we’d been disabused of the belief that power can protect you. It does feel daily that the deck of cards we’ve been playing with all our lives is thrown in the air. I often feel we’re living in a near-future speculative-fiction novel that is not very well written; the twists are too overblown, or tragic, or obvious, or absurd.

Maybe the fiction analogy applies in other ways too; I’ve returned lately to George Saunders’ brilliant short video “On Story,” in which he talks about the writer’s urge to micromanage a story. By way of example he takes the sentence: Frank is an asshole. It’s not a great sentence, he thinks; it doesn’t tell us enough about Frank. He works away at it until, several iterations later, he comes up with something like, Frank snapped at the barista who reminded him of his dead wife who he dearly loved. Saunders doesn’t know now whether Frank’s an asshole or not. He doesn’t know who Frank is; he’s writing to find out. If he cares enough for the sentences, they’ll show him. We overmanage our stories because we’re scared of the unknown, Saunders says, and in this respect, of course, these writerly fears are just plain human fears.

Uncertainty is a word that comes up so much now; our uncertain times. Uncertainty bothers us. We’re very much programmed to want to be sure about things. Studies have shown that we’re more stressed when faced with uncertainty than when faced with a definite negative outcome, and this has been demonstrably true, over and over, in my own life. So it’s really no wonder that the uncertainty of our times now unsettles people in profound ways.

I’ve had insomnia for the last two and a half years, often severe and disabling. My feeling, when lying in bed awake, has been one of falling, falling, with no ground to catch me. In the grip of that feeling there have been times when my thoughts would gravitate toward the ridiculous: what if I’m in a computer simulation? What if nothing I take to be objective reality really exists? What if I’m really alone? What if, what if. Mostly I have countered with, so what? But when the anxiety took hold, it would key into something fathomless: nothing is really known, nothing is really certain, even reality itself. Then I’d reach for certainties. I’d do my best to believe in something like God, and couldn’t. I’d do my best to believe in absolute materiality, and couldn’t. My incapacity to throw myself hard at a belief or set of beliefs has often troubled me in the night, when I’ve felt I most need something to cling to.

During lockdown I’ve been joining a daily online meditation class run by a man whose teachings and talks have got me through many sleepless nights. Each morning, 2,000 of us sit together. In one of these classes somebody asked the teacher if he believes in the idea of a soul; at this question he lit up, began to speak about how he finds soul in many things, all the time, a quality that something is imbued with indefinably but undeniably.

As he was speaking his expression was imbued with the kind of soul-like quality he was describing. Yes, said the questioner, but do you believe in a thing called the soul? His reply: he tries not to believe in anything. Rather than believe in something he looks for it within his experience, tries to understand what it is from the inside out. He understands soulfulness when he sees it in his child or hears it in a piece of music or feels it in a gesture he makes toward someone. He isn’t content to say whether there is an actual thing called a soul. I suppose this is like Saunders not being content to believe that Frank is an asshole. He’d rather feel for the sentences and see what they reveal.

I write about this because it spoke to me strongly in the context of uncertainty – my own, and the shared, global uncertainty we experience today. Everything, always, is uncertain; we have never lived in anything but uncertain times. We believe things as a form of security, and it’s startling how easily our beliefs begin to look a lot like knowledge, and how much we’re prepared to defend them. Our craving for certainty is often the thing that makes us most rigid, contracted and unhappy because it’s the thing that we can never have.

In one of those absurdist twists in our poorly written speculative-fiction novel of a reality, my meditation teacher fell ill from the coronavirus, and revealed that for two weeks he’d been surfacing each day to eat and to lead our morning session, and otherwise was spending around 20 hours in bed. Meanwhile he spoke to us lucidly, evenly, about allowing experience to stream freely through consciousness, seeing how nothing, nothing, is fixed, and finding the paradoxical comfort of stability in that fact. He seemed so profoundly unafraid, of everything. He told us not to get involved with our beliefs about how things are or might be or should be – just explore them as they appear, here and now. Then, after a fortnight of having the virus, his symptoms worsened and he was no longer there for the morning class. Two weeks on, he is still not there, and still unwell.

His illness has troubled me in the way Boris Johnson’s troubled many. I suppose I never believed that power could protect you. But maybe a small part of me did believe that – what? Wisdom? Fearlessness? Spirituality? – could. Yet it drives the point home: nothing is certain, and all we have is whatever is here, now, in our experience. It might be fleeting, but it is never absent; it is the only sturdy thing we can ever know.

When, a couple of years ago, I started writing from and about my insomnia, I found that I was writing myself into an increasing awareness of that shifting nature of my experience. I would sit on the floor at night, mad with sleep deprivation, and find that the only thing that settled me was an awareness of these lapsing moments. Not just: this will pass but this is passing already, and passing, and passing. I went from word to word, clutching the pen for the sake of clutching something. I followed the sentences wherever they went; I rarely knew where that would be, or to what end.

It feels like some of that practice, of being forced by suffering into the moment, and of writing from that moment, has given me a grounding that is an enormous help to me now. I still very often lie awake, though not more so because of the pandemic. I think about writing, about Frank, who I suspect is not an asshole. I think about my meditation teacher. My loved ones. Very occasionally I think about Boris Johnson. I fall in and out of odd dreams. But I don’t so much, anymore, try to find certainties to cling to or worry when I can’t. That, at least, has changed. 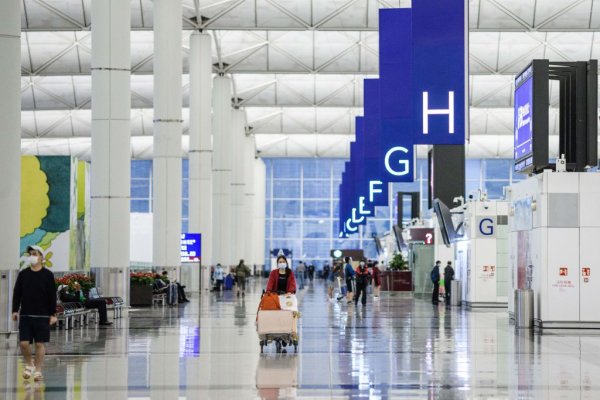 How Asia Is Slowly Reopening Its Borders
Next Up: Editor's Pick