What Life Is Like Inside the World's Longest Lockdown

Just before the whole world went into lockdown, Kashmir was coming out of one.

At the start of the year, before the coronavirus hit, the Indian government had been slowly lifting the restrictions on movement and communication that it had imposed in August 2019, when it stripped Kashmir’s long-held constitutional autonomy and imposed direct rule from Delhi. Here in India’s only Muslim-majority territory, residents were confined to their homes by soldiers patrolling the streets of the Kashmir Valley. The Hindu nationalist government in Delhi also cut phone lines and Internet connections.

In late January, after nearly six months cut off from the world, the Kashmir Valley regained access to a list of government-approved sites on 2G Internet. Then, in early March, broadband was restored and some local politicians were released from jail. But soon after the first case of COVID-19 was detected in Kashmir later in March, the region was plunged into lockdown once again, with new rules against movement and social gatherings. Mosques, normally full five times a day for prayers, are empty, and markets closed. As of May 4, the region has just 701 confirmed cases and eight deaths, out of a population of 12.5 million.

Even though the measures appear to have worked when it comes to stopping the exponential spread of the virus, the cost has been heavy. As people around the world have moved their lives online in response to lockdowns, that coping mechanism is virtually impossible in Kashmir because 4G Internet remains cut off, ostensibly to prevent militants from planning attacks.

India shuts off the Internet more than any other democracy in the world, and the government has been turning to the tactic more regularly in recent years. No state has had its access restricted more than Jammu and Kashmir, which experienced 55 Internet blackouts in 2019 alone, including the longest in recorded history, 213 days, when Delhi put the valley on lockdown in August. India’s Supreme Court in New Delhi is set to rule soon on whether 4G access should be reinstated. But on April 30 Kashmir’s Delhi-aligned government argued against the idea to the court, saying the “right to access the Internet is not a fundamental right,” and arguing “various Pakistan-based terror outfits” would exploit 4G Internet to plan attacks if high speeds were restored. That’s despite supreme court justices ruling in January that Indians had “fundamental rights” to freedom of speech and expression that extended to their use of the Internet — although they stopped short of declaring Internet access itself a constitutionally-protected right.

Even so, despite months of lockdown fatigue and distrust toward authorities for imposing such harsh measures back in August, Kashmiris are largely accepting the new lockdown in the hopes it will prevent a devastating spread of the disease. “The lockdown in August was against our consent. The authorities were barbaric during those months,” says Tasaduq, a 34-year-old businessman who asked to be referred to by only his first name, because he relies on the local government for permission to work freely in Srinagar, the region’s summer capital. Now, Tasaduq says, the mood is completely different, particularly since people are now allowed out to buy essential goods. “People are choosing to stay home. There is consent.”

Doctors say the Internet restrictions are having a negative effect on public health, too, as they must rely on slow 2G connections to download the latest medical studies and advice. “Because of COVID-19, everything is about new research,” says one doctor in a district hospital, who spoke on condition of anonymity because doctors have been threatened with jail time for speaking to journalists. “Every day, there is something about the virus that we must know in order to keep pace with our research but we are not able to access it properly because of the 2G speed.”

Even a simple file like a 10-page PDF document can take hours to download, the doctor says. “It’s very difficult if you want to access new research.” Doctors say they now rely heavily on messages forwarded by colleagues through WhatsApp for information on the virus. There, misinformation is rife, making it hard for them to know which messages are reliable and which are not.

Doctors are also unable to join live webinars, which have become a helpful tool for research professors in labs to share the latest information on the virus with doctors working on the front lines. “You cannot join them because of the low Internet speed,” says Dr. Suhail Naik, President of the Doctors Association of Kashmir. “Right now our hospitals are functioning normally, but if the crisis deepens, we don’t know if we can handle it.”

And authorities are still cracking down hard on dissent, with one doctor being transferred to a remote hospital in Jammu after publicly demanding protective equipment. Others have been threatened with losing their jobs if they voice concerns, according to doctors who spoke with TIME. “The attitude from the authorities is like we have signed up for this job to die,” one said. “Our health infrastructure is very weak.” At least one doctor has tested positive for the virus after not being given adequate protective equipment, TIME is told.

A Kashmiri volunteer looks through temporary barricades erected to prevent outsiders from entering an area declared as red zone by the government during lockdown in Srinagar, Indian controlled Kashmir, on April 14, 2020.
Mukhtar Khan—AP

For some, the repressive measures are a sign that the Indian government’s priorities in Kashmir have not been changed by the pandemic. “Any administration that is willing to impose the longest Internet shutdown in history only believes in the right of censorship and surveillance,” says Mishi Choudhary, the legal director at the Software Freedom Law Center, a group that campaigns for Internet freedoms.

That view is echoed on the ground, too. “The only transition has been the change of terminologies,” says one humanitarian worker who asked not to be named, to avoid repercussions impacting his aid organization. “It is all aimed at crippling dissent. This pandemic has been an extension of the same lockdowns; nothing has changed on the ground. People are still being harassed and journalists are being muzzled.”

One of those journalists is Masrat Zahra, a photojournalist based in Srinagar, who was charged on April 18 under an anti-terrorism law for “uploading anti-national posts with criminal intention” on social media, and “uploading photographs which can provoke the public to disturb law and order.” She says the Indian government is cracking down on local journalists to curb freedom of expression in the valley. “I personally feel they charged me to send a stern message to the whole journalist fraternity in Kashmir,” she tells TIME. “The message was pretty black and white – if they could book a female journalist, imagine what they could do to male journalists. There are only a few female journalists here. They intimidate and harass us.” The effect, she says, is that people are scared to talk to journalists now, making Kashmir even less visible to the rest of the world.

And although almost everything else in the valley has stopped, militant activity has not. In the latest violence on Sunday and Monday, eight Indian security personnel and two alleged militants were killed in gunfights in the town of Handwara, according to Indian officials. One child was also reportedly killed in the crossfire. In total, at least 105 people have been killed this year, including nine civilians, according to the South Asia Terrorism Portal, a group that tracks the conflict. For the first time ever, since the pandemic began, authorities have begun burying militants far from their homes, thus preventing funerals — large, often politically-charged events that can serve as recruitment opportunities for militant groups. The government says the move is part of its wider ban on all public gatherings, but even before the last lockdown in August, the Indian government had begun planning ways to reduce the size of funerals.

Alongside measures that have alienated some of the population, the pandemic has also created an opening for authorities to increase public trust. Thousands of free Ramadan ration kits are being distributed by the government to needy people in parts of the valley. And on Thursday, to help students struggling to conduct their studies on slow Internet connections, Union Minister Jitendra Singh announced that state authorities have arranged special classes to be televised instead.

Even so, the lessons from the world’s longest lockdown appear to be less about epidemiology than democracy itself. “Even in the 21st century, in the middle of a global pandemic, 8 million people can be deprived of access to education, livelihood, entertainment, and mental health respite via a medium that has become an essential service for the rest of the world,” says Choudhary. “Even democracies can kill the switch and take away all human rights.” 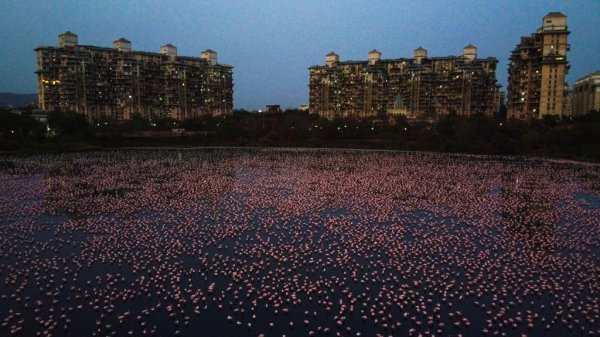 Over 100,000 Flamingos Descend on Mumbai
Next Up: Editor's Pick