California, so far, is a relative success story amid the coronavirus pandemic.

Bay Area counties were the first in the nation to issue stay-at-home orders; statewide policies followed soon thereafter. And swift action early on appears to have flattened the curve and limited the number of deaths. As of May 1, fewer people had died from the coronavirus in California, a state with 39.5 million residents, than in Pennsylvania, a state with 12.8 million.

But with businesses struggling and millions unemployed, some residents have grown restless for the state to reopen.

In a video series TIME is producing with Katie Couric, California Gov. Gavin Newsom says that the state’s relative closeness to China, where the COVID-19 outbreak began, helped the Golden State avoid a worst case scenario.

One key event that got Californian officials’ attention was their involvement with repatriating Americans from China’s Wuhan province back in early February, more than a month before the World Health Organization declared the outbreak a pandemic. Several California military bases were chosen as the locations to quarantine those Americans, in part because of the shorter flight distance involved. “It really brought to the fore what this pandemic was,” Newsom says.

Despite the apparent effectiveness of strict shelter-in-place measures, California residents, particularly in GOP-leaning and rural areas, have started pushing for them to end. As other states begin to reopen businesses and allow gatherings, California remains largely shut down; in fact, Newsom recently announced the closure of some popular beaches. Cities have seen protests from those who feel the economy is being unfairly hampered by overzealous measures.

In his interview with Couric, Newsom says his greatest fear is “fatigue” — that residents will start trying to return to life as it was before such a return is safe. The beach closures, for instance, came after tens of thousands of Californians flocked to the ocean en masse during a recent weekend. “All the progress that’s been made over the course of the last 90 days,” Newsom says, “can be thrown out in the matter of weeks.”

California’s stay-at-home order remains in effect until further notice. When asked how long it might last, Newsom didn’t provide a timeline, calling dates “arbitrary” at this point. “I am deeply connected to the stress and anxiety our small business men and women have, and people that desperately need to go back to work,” he said. “At the same time, we’ve got to keep people healthy. And the best way to go back to work is to tame this, to suppress the spread.”

Newsom likes to call California a “nation-state,” and he’s under no illusion that it will be easy keeping people home in this vast jurisdiction for what might be several more weeks, even months. “There’s a lot of whitewater, a lot of friction that’s going to happen,” Newsom says. “It’s been difficult today, but the next few months and years are going to be challenging.” 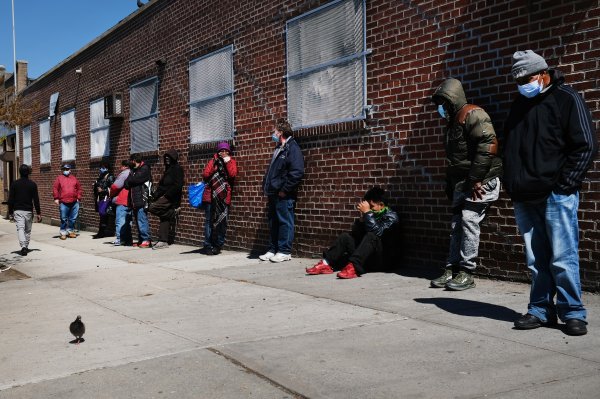 The Poor Are Getting Poorer As Creditors Pursue Debts
Next Up: Editor's Pick