People wait in line to receive food at a food bank on April 28, 2020 in Brooklyn, New York.
Spencer Platt—Getty Images
By Alana Semuels

Cindy Kimbler knows she’s lucky to have a job right now, especially after being furloughed for a week by her employer, a thrift store in Grove City, Ohio. But in mid-March, she noticed something strange. Although she was working her usual hours, putting her health in danger with every shift, she was making one-third less money.

The reduction amounted to about $200 a week and was significant, especially since Kimbler only makes $11 an hour as a cashier. She checked with her payroll department and learned that in mid-March, a creditor had started garnishing her paychecks. Kimbler, 59, hadn’t even been aware of the court judgment allowing the wage garnishment to begin. The debt, she says, is from four years ago, when her car broke down and she got a payday loan—with an interest rate of around 26%— to fix it.

Even before the coronavirus sent the economy plummeting, Kimbler had been living paycheck to paycheck. Now, suddenly, she was in danger of not being able to make rent and possibly being evicted when the local eviction moratorium lifted. “I thought, ‘I am never ever going to be able to pay any of my bills with them taking $200 out of my check,’” she told me recently.

Though some protections exist for people struggling financially during the COVID-19 pandemic, thanks to the CARES Act stimulus package signed into law on March 27, they largely ignore those who were already on the edge of financial ruin. The CARES Act has paused federal student loan debt payments and payments on federally-backed mortgages, and various cities and states have suspended evictions. But few states have stopped creditors from moving ahead with wage garnishments, repossessions, and attachments (one-time seizures of bank accounts). This means that in many cases, the pandemic will tip people like Kimbler, who was barely getting by, into an economic abyss from which it will be difficult or impossible to recover. Even the one-time $1,200 stimulus payments promised to millions in the U.S. can be garnished by financial institutions in many states.

“This is crippling people right now,” says Melissa Linville, an attorney at the Legal Aid Society of Columbus. “Some courts are carrying on as if there is no pandemic.”

And with parts of the country starting to reopen to business, sending a message that it’s time to rev up the economy, legal advocates see little chance of new restrictions to protect the poorest sector of society. That means a likely rise in consumer bankruptcies as individuals see no way to escape their debts.

“Things were bad before the COVID emergency, they got worse with COVID, and they’re going to get even worse,” says Margot Saunders, senior counsel at the National Consumer Law Center.

Garnishments can occur after a creditor obtains a court judgement against someone who owes them money. Some people are not aware of the court hearings, often because they have not been informed by the creditor and don’t show up to argue their cases. Kimbler says that’s what happened to her. But once a court gives the go-ahead, creditors are free to take a portion of a person’s wages from their paycheck. A separate order allows them to seize money from an individual’s bank account. Federal law requires that debtors are left with at least $217.50 a week in take-home pay—for a family of four, that’s less than half the federal poverty level. Some states protect more income from creditors, but creditors aren’t limited to targeting money. They are free to seize cars, even if a debtor needs a vehicle to get to work to earn the money to pay off their debts.

Unemployment checks are supposed to be protected from creditors, but even they are at risk of seizure once they are deposited into bank accounts. To protect their benefits, debtors must file a court motion, which is challenging in scores of jurisdictions where the coronavirus has closed most courts. People who do succeed in filing motions are being told they must wait weeks and sometimes months for their cases to be heard. In the meantime, the funds remain frozen. “I really worry that these creditors will use this delay to get debtors to pay them money they don’t have the right to,” says Alex Kornya, litigation director of Iowa Legal Aid. Before the pandemic, Iowa judges would hear exemption cases within a week; now, clients’ hearings are being scheduled two or three months from now, he says.

Cindy Kimbler outside her place of work, the Volunteers of America store, in Grove City, Ohio on April 25, 2020. Kimbler received help from the Legal Aid Society of Ohio after debt-collectors started garnishing her wages in March.
James D. DeCamp—JamesDeCamp.com

In Wisconsin, people who receive food stamps can file a document arguing they are exempt from wage garnishment, says Karen Bauer, a staff attorney at the Legal Aid Society of Milwaukee. But creditors are trying to make people go to court to prove they get food stamps, and so the garnishments are continuing. “We’re seeing a lot of issues with people just trying to protect the money that was supposed to be there to protect them,” she says.

Garnishments are also coming from the U.S. Department of Education, even though Secretary of Education Betsy DeVos announced on March 25 that the department would halt collection actions and wage garnishments for 60 days beginning March 30. Andrew Orlandini, 52, a military veteran who works at a hazardous waste disposal company in Milwaukee, has had his wages garnished weekly because of a $13,000 student loan debt, despite the DeVos directive. Orlandini says his employer won’t stop garnishing until it receives a letter from the DOE instructing it to do so. (Employers risk violating a state court order if they don’t comply with a garnishment). A spokesman for Ascendium, the company that is garnishing Orlandini’s wages on behalf of the Department of Education, says the action should have stopped. It’s possible the employer or collections agency missed the notice to halt garnishments, he says, and he pledged to look into Orlandini’s case.

In mid-April, U.S. Senator Cory Booker and Congresswoman Ayanna Pressley, along with 30 colleagues, wrote a letter rebuking the Trump administration for allowing garnishments to continue for federal student loans. And on May 1, the National Consumer Law Center, in partnership with other groups, announced a class action lawsuit against DeVos and the Department of Education demanding an immediate halt to garnishments of student borrowers. The lead plaintiff is a home health aide whose hours have been reduced during the pandemic and who has no money in her bank account, but whose paychecks are still being garnished.

Volunteers distribute eggs from the Second Harvest Food Bank of Central Florida to needy families at a drive through event on April 17, 2020 in Kissimmee, Florida.
Paul Hennessy—NurPhoto/Getty Images

Many states and local governments are still garnishing wages and collecting outstanding debts from court fees and fines, including traffic tickets, according to Joanna Weiss, the co-director of the Fines and Fees Justice Center in New York. Though some states like Delaware and California have suspended the active collection of payment for criminal, civil, and traffic violations, others are still sending collection notices, revoking driver’s licenses, and in some cases, jailing people who fall behind on fees.

After Reunca Lewis was pulled over on April 17, a Friday, because her car was missing a license plate, she told me she spent the weekend in a cramped jail cell in Alabama with six other women. Like her, all of them were there for unpaid traffic tickets. Lewis, 23, doesn’t deny that she’d fallen behind on paying traffic tickets, something the officer who pulled her over quickly discovered, but Alabama Gov. Kay Ivey on March 13 had directed law enforcement to issue summons or citations when possible in light of the pandemic. “The condition of jails inherently heightens the possibility of COVID-19 transmission,” Ivey’s proclamation read. Nevertheless, Lewis says she was handcuffed as her 6-year-old son watched and taken to jail, where it was too crowded to keep a safe distance from her cellmates.

“It was just mind-blowing that all of us were in there for traffic tickets,” she says.

A few states have acted to protect indebted consumers. Virginia suspended new garnishment orders and has allowed consumers to attend remote hearings to seek exemptions from previous orders. Illinois suspended wage garnishments while the state is under a gubernatorial disaster proclamation. Texas suspended all service of new garnishments until May 7. Washington, D.C. prevented creditors from initiating, threatening, or acting upon a garnishment. But none of these orders suspend old garnishments, and only Virginia provides a way for clients to quickly file for exemptions.

Twenty-five state attorneys general wrote a letter to Treasury Secretary Steven Mnuchin on April 13 asking that the Treasury take action to prevent stimulus payments from garnishment, but the Treasury has not acted. A transcript of a Treasury Department call with financial institutions obtained by The American Prospect indicates that the department told banks that there was no law that prevented them from seizing stimulus payments, which some critics saw as de facto permission to seize the money. The National Consumer Law Center has been advocating for an amendment to the CARES Act that would treat stimulus payments like government benefits such as Social Security, which creditors are not allowed to seize.

Even if an amendment were to pass, it would not help the people who’ve resorted to bankruptcy in the face of persistent debt. Stephania Fredericksen, a 36-year-old artist, took that step after she was served with a debt collection lawsuit on March 26 over unpaid student loans. Fredericksen says she had been catching up on payments until the pandemic hit. Art fairs were canceled and tourism slowed in her hometown, Charleston, SC, and her income dried up. “I was just catching up again, just gathering speed, and now this,” Fredericksen says.

She went onto Upsolve, a nonprofit website that allows low-income consumers to file for bankruptcy, and filled out the paperwork. Upsolve CEO Rohan Pavuluri says the majority of people coming to Upsolve now are those whose finances were affected by COVID-19.

Upsolve can’t help everyone–it is only for people who have simple Chapter 7 bankruptcy cases and who satisfy a host of other requirements. People must answer hundreds of questions to figure out if they qualify. Fortunately for Fredericksen, she did, but Saunders, of the National Consumer Law Center, worries that the increased cost of filing for bankruptcy and the excessive paperwork, the result of a massive bankruptcy reform in 2005, will prevent people from exercising that option. There will also be delays in filing because many courts are still closed.

Many consumers may be waiting to file bankruptcy until they hit bottom and realize the depth of their financial hole. They may also be worried about filing too soon, because of the requirement that eight years pass between Chapter 7 filings. If they fall deeper into debt shortly after one Chapter 7, they’ll have to wait a long time before seeking this relief again.

Cindy Kimbler, the Ohio cashier, didn’t want to wait. Once the creditor started garnishing her wages, she started calling bankruptcy attorneys to figure out her options. The private lawyers quoted costs starting at $1,500—money she didn’t have—so she contacted the Legal Aid Society of Columbus, which is now helping her file for bankruptcy. The lawyers there have been able to stop the garnishing of Kimbler’s wages, and the organization only asked that she pay the $350 in court filing fees.

“I’m just looking forward to getting my life back on track,” says Kimbler. For the first time in a long time, Kimbler is optimistic about her financial future, and that makes her a rarity in America today. 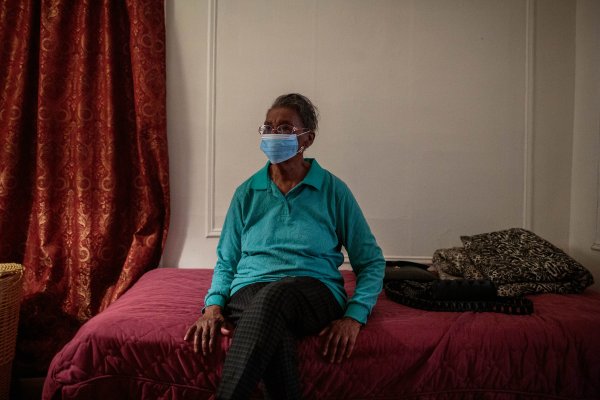 We Asked 30,000 Black Americans What They Need to Survive. Here’s What They Said
Next Up: Editor's Pick