Republican Governors' Response to Coronavirus May Save the GOP From Trump

President Donald Trump speaks during the daily briefing of the coronavirus task force in the Rose Garden at the White House in Washington, on April 27, 2020.
Win McNamee—Getty Images
Ideas
By David French
French is a senior editor at The Dispatch and a columnist for Time. His new book is Divided We Fall: America's Secession Threat and How to Restore Our Nation. He is a former major in the United States Army Reserve.

The federal response to the coronavirus has revealed a truth that until now had remained hidden behind the veil of state politics – the Republican Party, it turns out, isn’t entirely Donald Trump’s party quite yet. While the national GOP, including Congress, live in an all-Trump news cycle, state Republicans have often governed their states as if Donald Trump did not exist.

National media storylines driven by the Russia investigation, impeachment, and dramatic judicial showdowns have obscured the extent to which state GOP leaders have charted independent cultural and political paths. But now, that independence may face its ultimate test.

Throughout the Trump era, one could examine red state after red state and see conventional Republican governance, complete with an emphasis on values that seem out of step in the Trump era. In my state, Tennessee, an honorable Christian conservative businessman, Bill Lee, defeated more-Trumpist primary opponents, replaced another honorable Christian conservative businessman, Bill Haslam, and has governed the state with a commitment to decency that’s utterly alien to the Trump White House.

In Ohio, Governor Mike DeWine has not only earned praise for his prompt and decisive response to the Coronavirus, he’s carved out a distinct – and distinctly traditional – approach to leadership. Weeks after Donald Trump bluntly declared, “I don’t take responsibility at all” for consequential coronavirus testing delays on his watch, DeWine tweeted the opposite message, taking responsibility for his own actions and the actions of members of his administration.

“Any complaints about the policy of this administration need to be directed at me,” he said. “I am the office holder, and I appointed the Director. Ultimately, I am responsible for the decisions in regard to the coronavirus. The buck stops with me.”

Whereas Trump has long been a divisive figure, with an approval rating that rarely edges over 44 percent, multiple GOP governors have enjoyed stratospheric state poll numbers. By the end of 2019, each of the top 10 most popular governors in the country were Republican, including moderate blue-state GOP governors such as Maryland’s Larry Hogan and Charlie Baker of Massachusetts.

Removed from Washington, governors have enjoyed the luxury of not having to answer for Trump’s tweets, to decide his fate in impeachment, or to react to his appointments and policies. But the combination of a national crisis, Trump’s own mercurial personality, and his wildly expansive view of his own authority may well lead state Republicans to ask the key question, “Who really leads?”

Just ask the Georgia GOP. In an effort to prop up his state’s failing economy, Georgia’s governor, Brian Kemp, took both a public health and political risk by easing restrictions on state businesses, only to watch the president condemn Kemp’s move – just a day after Trump reportedly gave Kemp his blessing in a private conversation.

Trump attacked Kemp days after he launched a broadside at Hogan for purchasing 500,000 Coronavirus test kits from South Korea. Hogan claimed that he had merely done what the administration had previously asked — for “the states to take the lead” in expanding testing capacity.

Note the common theme, when a governor’s action has the potential to make Trump look bad – even if the governor was responding to private administration guidance –Trump lashed out.

Governors face a perilous path. As the Wall Street Journal reported, Trump “has asked White House aides for economic response plans that would allow him to take credit for successes while offering enough flexibility to assign fault for any failures to others.”

Combine Trump’s wrath with his hold on GOP public opinion, and an increasing number of governors may face the reality that Senators and members of Congress have confronted since his inauguration – crossing Trump can potentially end a once-promising political career.

The irony is that Trump’s best chance to save his presidency may lie in governors – including governors from his own party – willing to risk his wrath. In that sense, Kemp’s plight presents a cautionary tale. When the president veers from demanding that local politicians “liberate” states to extending lockdowns and back again, the president sends a clear message. He’s not a reliable partner. Governors may save Trump by ignoring Trump. They should recognize that his public statements and public pressure are driven not just by his latest briefings, but also by the morning’s episode of Fox & Friends. “Re-opening America” while not setting the virus loose on previously-untouched state populations will require an acute sensitivity to available health data combined with the political courage to perhaps defy the president if the “liberation” proceeds slower than he likes.

Because of our nation’s federalist system – which places state public health regulations predominantly in the hands of state officials – our national future depends greatly on the collective work of governors. If they do their jobs well, by November Americans could begin to enjoy the benefits of renewed economic growth and declining death tolls. Nothing can undo the effects of the administration’s early missteps (including testing delays and the president’s own repeated efforts to downplay the crisis), but a sense of hope and progress can be politically potent, even if that hope and progress can’t be laid directly at the president’s feet.

There are interesting implications for the future of the GOP. Obviously, if Trump wins, then his brand of confrontational populist nationalism will (for the time-being) be the orthodox GOP playbook. If he loses, the GOP may do what parties often do after a stinging defeat – reverse course, decisively. And who could be best-equipped to pick up the GOP standard? A Republican governor who stood his ground, kept his cool, and governed well.

But it’s just too soon to tell which direction the political wind will blow. Trump’s modest rally-around-the-flag polling polling bump that he gained at the start of the crisis has all but dissipated. According to FiveThirtyEight, his approval polling average is down to a more-normal 42.6 percent. Mike DeWine’s approval rating, by contrast, stands at 75 percent. But so long as Trump has a hammerlock on GOP voters (and he still does), there’s not yet enough daylight for a competing Republican vision for the national party.

Americans have watched as virtually every national GOP politician has either fallen into Trump’s orbit, fallen silent, or fallen out of office. Republican independence is hard to find inside the beltway. Outside, in the vast interior of the country, the story has been different. Governors will have to cling to that independent spirit. Otherwise, Trump’s affection could prove dangerous to the people they’ve pledged to serve and protect. 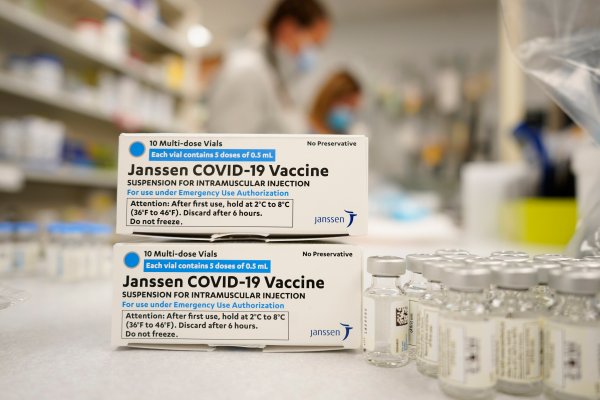 Fauci Expects J&amp;J Vaccine to Resume This Week
Next Up: Editor's Pick