COVID-19's Body Count Will Go Beyond Those Who Die From the Disease. It Didn't Have to Be This Way

A homeless person sits in the rain on April 24, 2020 in New York City.
Pablo Monsalve—VIEWpress via Getty Images
Ideas
By Lauren Sandler
Lauren Sandler is a journalist and the author of This Is All I Got: A New Mother's Search for Home and One and Only: The Freedom of Having an Only Child, and the Joy of Being One.

Now it’s the worst of times. And a social services system that was overstretched in the best of times is set to unravel completely just when people need it most.

This will be the true legacy of our Gilded Age, suddenly behind us: that when our country could have afforded to mend our national safety net, we shredded it instead. And after the dead have been counted, after the masks and gloves are discarded or packed away until the next pandemic, it is our failure to shore up the safety net in our years of prosperity past that will destroy far more lives than the coronavirus itself.

Five years ago, I began reporting a book about a young homeless mother, whom I call Camila. She was a criminal justice student, yoked by poverty in the richest city in America. I met her in a private Brooklyn shelter and spent a year with her as she attempted to make a stable life in the shadows of luxury condos. She’d grown up in Corona, Queens, near Elmhurst hospital, which has been called the epicenter of the virus.

Camila’s caseworkers would tell you that they’d never seen anyone as knowledgeable about the system in which she was stranded. They marveled at how she kept policy and dates and addresses and caseworkers’ names in her head, as she navigated waiting rooms and obtuse paperwork in her search for affordable housing, in her securing of public assistance, in her endeavors to establish legal paternity and procure child support, in her efforts to stay in school. I believed that if Camila couldn’t find her way through the labyrinth of the social services system, to make it work for her, that no one could. And she couldn’t — in the best of times.

As she was caring for a newborn–one of 2.5 million homeless children before the world turned upside down–as one of the single mothers who represent a majority of our homeless, as well as the largest population who lives under the poverty line, Camila spent her days riding miles of subway lines and standing in lines, just to come face-to-face with constant futility. What scholars call “administrative burden,” the impossible bureaucracy of red tape, impenetrable forms and days wasted in fluorescent-lit waiting room, yielded a reality that often meant you’d still end up without a welfare check, or a food stamp card, no matter how dire your need. We are newly aware of the modern inferno our world has become. For many it already was. And for them it’s now horrendously worse.

Most people on welfare worked before the world changed several weeks ago. About half of home health care workers and childcare-givers collect welfare, as they aren’t paid a living wage; more than half of fast-food workers do. They are many of the workers who can’t work from home, in this moment of required social distancing.

In the best of times, more than half of New Yorkers were rent burdened—meaning they spent at least one-third of their income on housing. This was hardly just a cosmopolitan problem, the price of flashy city living: over half of residents from Flint, Michigan to Hialeah, Florida were rent burdened, too. This has become an accepted norm, a crisis that many people managed by overcrowding apartments to split the rent. Good luck keeping six feet apart when you’ve got an entire family in each bedroom. Now in the Bronx, where Camila lives, and in Queens–both boroughs where salaries are low and the number of household members are high–COVID-19 infections outpace the rest of the city.

It wasn’t Camilla’s plan to be in a shelter or an overcrowded apartment, any more than it was to go on welfare. She had hoped of getting a place in public housing, but about 175,000 families were on the waiting list to get in. Meanwhile, a full-floor apartment in 432 Park Avenue sold for $87.7 million dollars in 2016. And as recently as March, an apartment at 220 Central Park South sold for $51.4 million.

Tax abatements for this new wave of luxury condos were projected to cost the city up to $2.8 billion dollars over a decade. Camila had applied for some affordable apartments–the exchange for these abatements–before she’d found herself homeless and pregnant, and they required a minimum take-home pay of $142,000 for a two-bedroom. Camila’s annual public assistance checks added up to a little over $16,000; her work-study job at her community college didn’t bring her much closer. Even for a studio, the required take-home pay was $57,000, almost the median U.S. household income. No wonder, 60,000 people slept in shelters in New York, and thousands more slept on the street. Consider how many will be joining those numbers in the weeks and months to come.

Now, under fear of viral spread, police clear homeless encampments, under orders to get people into homes they don’t have. Hospitals send COVID-19-positive patients who don’t need life-or-death care into the overwhelmed shelter system. Only one office in each borough is currently open to process food stamp applicants. Of the 18 welfare offices in the city, eleven are closed . Unemployment offices are at a standstill, overwhelmed by demand; the website crashes constantly, the phone lines are busy, it can take weeks to get benefits. Twenty-two million Americans have lost their jobs in the past month, with real unemployment nearing 18%.

Rents unpaid. Children unfed. Medical care linked to work that’s gone now, just as people need it most. Housing vouchers unavailable through much of the country. New Section 8 applications haven’t been made available in New York since 2009; the economy may have come back, but the vouchers never did.

Camila and her son were among our half a million homeless fellow Americans. Imagine what that number will be next week, next month, maybe even next year. Our calamity of inequality was chosen and tolerated during unprecedented prosperity. It didn’t have to be this way; Americans in power could have strengthened our safety net. The failure to do so will result in a different kind of body count, which will shamefully and tragically define who we are for the era to come. 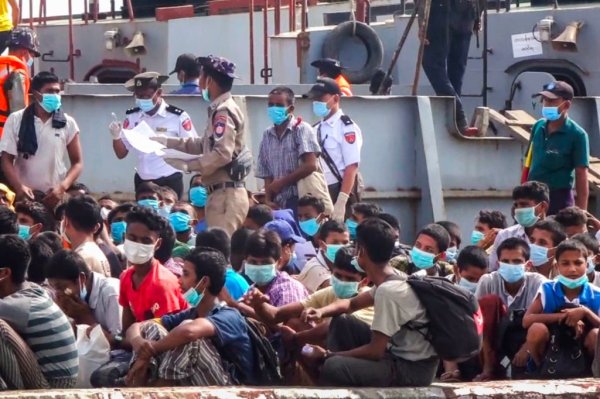