First the Women Who Ran This U.K. Military Hospital Faced World War I. Then Came the 1918 Flu Pandemic

Loading up blankets into an ambulance in Gower Mews, London, in September 1918.
The Wellcome Collection
By Wendy Moore

When war broke out in 1914, surgeon Louisa Garrett Anderson and her life partner and fellow physician, Flora Murray, saw that the crisis would create an urgent need for trained medical staff—and a unique opportunity to put their skills to use. Though women could qualify as doctors in the U.K., they were effectively barred from treating male patients and therefore excluded from mainstream medical practice. The war and the ensuing outbreak of “Spanish Flu” changed that, for a time—during which Anderson and Murray valiantly and resourcefully treated thousands of patients at the Endell Street Military Hospital, supported by a staff comprised almost entirely of women. In No Man’s Land, journalist Wendy Moore tells the women’s story in full for the first time:

The church bells that had rung so riotously to celebrate the Armistice were tolling now for funerals. Men returning from the front line, in a state of frenzied joy mingled with bewildered grief, were suddenly taking to their beds.

In Endell Street, patients and staff were developing fevers, aches and coughs at a rate that had never been seen before. The flu had returned. Having disappeared at the end of the summer, the virus had mutated into a deadlier, devastating new form.

The first signs that the flu had returned to Endell Street had been almost overlooked in the last push toward victory. Men and women arriving in convoys from France showed influenza symptoms in mid-October, when Dr. Vera Scantlebury had returned from a break to find “‘Spanish flu’ flying round the wards.” By the end of that month, with peace just within grasp, cases of the flu were “rolling in,” she noted, and the disease had spread to staff. Eleven orderlies had been struck down and admitted to “H” ward, where members of the Women’s Army Auxiliary Corps were normally nursed. Now that the war’s outcome had been decided, the hospital was inundated with flu. Local civilians crowded the casualty room, coughing and sneezing, or arrived by ambulance in a worse state as they fell victim to the disease. By mid-November, “dozens of local sick” had been admitted. Between 50 and 60 patients at a time were seriously ill with pneumonia— often the final stage of the flu. Extra beds were made up on the wards and immediately filled, more nurses had to be recruited to replace those who fell ill, and the doctors worked without breaks.

Just when the staff should have been able to rest and recover at the end of the long, dreary war, they were working harder than ever and—worse, much worse—with the least success. Throughout the war, the Endell Street women had saved thousands of soldiers from death and disability through a combination of surgical expertise, pioneering infection control, skilled nursing, dedicated physical therapy and their particular brand of motivational spirit. But they were no match for the flu. With no antiviral medicines to combat the disease or antibiotics to treat the ensuing pneumonia, which often caused death, they were powerless to help their patients. All they could offer was aspirin, morphine and quinine to suppress the symptoms; fluids and nourishment to keep up their patients’ strength; and bedrest in the hope that the victims would beat the bug themselves. Many of them didn’t.

The death rates shocked nurses and doctors alike. Throughout the war years, in the face of appalling wounds and rampant infections, no more than eight soldiers died for every thousand patients treated at Endell Street—some 200 deaths in all. Yet in November and December 1918, 24 men and women died of flu; at times, there were as many as three deaths a day.

Photograph of a ward in the Endell Street Hospital in London, run exclusively by women.
The Wellcome Collection

The speed with which patients succumbed to the flu, and the symptoms they displayed during its course, were completely alien to the Endell Street staff. “Men died like flies, in the street one moment, then three days later, dead,” said nursing orderly Nina Last. “It was more like a plague than influenza.” Experienced doctors agreed. Victims first complained of sore throats, headaches, and generalized aches but were very quickly forced to take to their beds. Unable to rise, many developed the tell-tale signs of blue-tinged lips and fingers or plum-colored blotches on their faces as their lungs became congested with blood and struggled to produce oxygen. Some patients’ teeth and nails fell out; other patients became delirious and even violent or suicidal. Those who failed to rally succumbed either to the virus itself or, more often, as their lowered immune systems allowed bacteria to invade the lungs, to pneumonia, frequently within three days of showing symptoms. As their lungs filled with bloody fluid, they effectively drowned, commonly coughing up blood and bleeding from the nose or ears. Most doctors assumed the disease was caused by a bacterium; the recently discovered Pfeiffer’s bacillus (Haemophilus influenzae), which was sometimes present in pathology specimens, was the prime suspect. Not until 1933 would scientists realize that a virus, too small for early 20th-century microscopes to detect, was the real cause.

Battling to keep the hospital running as patients and staff sickened with the flu, Flora Murray insisted that the women must be meticulous about hygiene. A disinfecting hut was set up in the courtyard, and staff were sent there to breathe in steamy vapor twice a day. More usefully, perhaps, she ensured that those with the flu were segregated on special wards, with screens placed around their beds, and that doctors and nurses wore face masks at all times. These measures would later be made standard practice by the War Office.

In all a total of 6,000 people would die in the capital before the third wave eventually receded in May. Struggling to cope with the new flood of admissions, staff at Endell Street watched the death rate rise through January and hit a record high of 30 deaths in February—the hospital’s biggest monthly death toll ever. But the brunt of those deaths was borne by the staff.

After winning her own battle with flu, Nina Last watched as one after another of her colleagues sickened and, in some cases, died. “Pretty young girls, quite well one day, were dead in three days time from streptococcal germs, or influenza,” she recalled.

The deaths of these young women, after their years of devotion to the hospital, hit the COs hard. During the darkest periods of the war, when staff worked night after night, and as the convoys rolled in and bombs fell, that idiosyncratic mixture of patriot zeal and Endell Street spirit had kept the women going. Now that they found themselves fighting an invisible enemy, to no apparent purpose, they had reached the breaking point.

Adapted from No Man’s Land: The Trailblazing Women Who Ran Britain’s Most Extraordinary Military Hospital During World War I by Wendy Moore, available now from Basic Books. 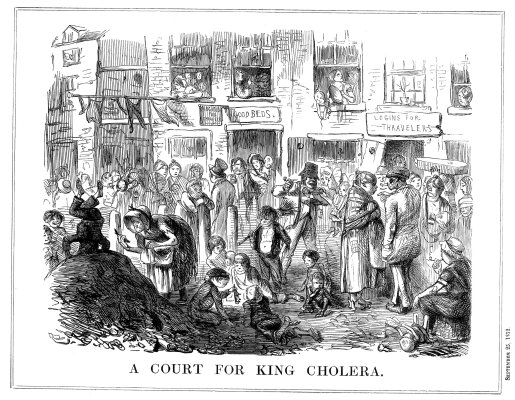 The Cholera Outbreak That Launched Epidemiology
Next Up: Editor's Pick