Residents of Miami’s Fisher Island, which was named the richest zip code in America by Bloomberg in 2018, have reportedly decided to not accept a $2 million federal loan granted to their homeowners association.

The Fisher Island Community Association (FICA)— the island’s master homeowners’ association, which was granted the loan — was reportedly approved for the seven-figure federal loan from the U.S. Paycheck Protection Program, which set aside $349 billion to help small businesses and non-profits retain their workforce amid the coronavirus pandemic.

The average income of Fisher Island’s residents was $2.5 million in 2015, according to Bloomberg. Around 700 families live on the island, which can only be accessed by boat.

The association faced sharp criticism after news of the loan being granted broke. According to its website, the Fisher Island Community Association’s “primary responsibility” is to “manage, maintain and improve the common areas of Fisher Island.” That includes the island’s Public Safety Department, which staffs “numerous strategic posts 24 hours a day 7 days a week,” as well as a landscaping department that includes “a 7 day a week landscape staff.”

The Paycheck Protection Program has faced controversy in recent days, as it has become clear that some large publicly traded companies — some valued at over $100 million, according to the Associated Press — swiftly received loans while the applications of small businesses were denied because funding ran out.

Funds were intended to go to businesses with 500 employees or less, but the large restaurant chains Shake Shack and Potbelly were each granted $10 million loans; both have since said they’ll return the money. The Ruth’s Chris Steakhouse chain was granted $20 million, which it will also return. And AutoNation, the country’s largest car dealer chain — and is valued at $3 billion according to the Wall Street Journal — also returned the $77 million loan it received.

Ana Tinsly, a spokeswoman for the union SEIU Florida, told the Miami Herald that its 130 members who work on Fisher island have not experienced layoffs and have been given extra paid days off to facilitate social distancing. (SEIU Florida did not immediately respond to TIME’s request for comment.)

The Herald reports that FICA told island residents on Wednesday that it had applied for the loan on April 4 and was approved for it on Monday.

Once the loan was approved, FICA reportedly asked the island’s residents to weigh in on whether or not they should accept the loan. “It is very important to the board of Directors to take into consideration the views of our members,” the Association said in an email to its residents seen by the Herald. “It is also important to the board that the right decision is made for the island.”

Florida news channel Local 10 reports that many of those residents joined a virtual call on Friday night with board members, who decided to not accept the loan. (A representative for Fisher Island could not be immediately reached for comment on the loan, or residents’ ensuing rejection.)

“What are we getting $2 million for and why are we applying for $2 million?” one Fisher Island resident told Local 10, an ABC affiliate, adding that he didn’t think the island needed the money.

As of Saturday afternoon ET, Florida had at least 30,839 confirmed cases of coronavirus and at least 1,055 deaths, according to a tracker by Johns Hopkins University.

On Friday, President Donald Trump signed a bill refunding the Paycheck Protection Program with another $310 billion; applications for a second round of loans should open soon. In the past five weeks, over 26 million people have filed for unemployment in the United States — about one in six Americans. 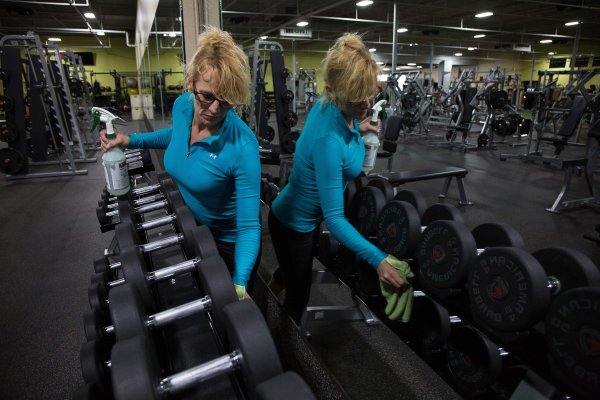 'They Made Us Guinea Pigs'
Next Up: Editor's Pick