'When He Gets New Information, He Likes To Talk That Through Out Loud,' Dr. Birx Says of Trump's Comments on Ultraviolet Light, Disinfectants as COVID-19 Treatments

During an interview set to air Saturday night on the Fox News program Watters World, Dr. Deborah Birx addressed controversial comments made by President Donald Trump during an April 23 press conference. During the presser, Trump appeared to suggest that “ultraviolet” light and the ingesting of disinfectants could serve as treatments for the novel coronavirus.

“When he gets new information, he likes to talk that through out loud and really have that dialogue — and so that’s what dialogue he was having. I think he just saw the information at the time immediately before the press conference and he was still digesting that information,” Dr. Birx told host Jesse Watters, during a preview of the interview shown by Fox’ chief White House correspondent John Roberts on Friday.

Watters also referenced Dr. Birx’s comments when speaking on Fox News program The Five on Friday. “I’m having Dr. Birx on my weekend show, and I actually asked her, ‘You were there, Dr. Birx, do you think the president would say anything dangerous?’” Watters said. “She said no, she said he was probably, as he does, thinking out loud and trying to come up with a good idea. And just talking to the person at DHS,” he continued.

The White House did not immediately offer a response to TIME’s request for comment on Dr. Birx’s statements.

During an April 23 press conference, Bill Bryan, an undersecretary at the Department of Homeland Security (DHS), shared that a U.S. government study had found that the virus could be killed with exposure to sunlight, heat and humidity. He suggested Americans consider “increasing the temperature and humidity for potentially contaminated indoor spaces” as a way to combat the virus. Bryan also spoke about disinfectants, and said the study found bleach could kill the virus living in saliva within five minutes, “just spraying it on and letting it go.”

However, this study’s findings have not yet been peer reviews or published in a scientific journal, ABC News reports. A spokesperson for DHS told ABC News they are preparing for the study to undergo that process.

Following Bryan’s announcement, President Trump said, “So I asked Bill a question that probably some of you are thinking of… Supposing we hit the body with a tremendous — whether it’s ultraviolet or just very powerful light? And I think you said that that hasn’t been checked, but you’re going to test it. And then I said, supposing you brought the light inside the body, which you can do either through the skin or in some other way, and I think you said you’re going to test that too. It sounds interesting.”

“And then I see the disinfectant, where it knocks it out in a minute. One minute,” Trump continued. “And is there a way we can do something like that, by injection inside or almost a cleaning? Because you see it gets in the lungs and it does a tremendous number on the lungs. So it would be interesting to check that.”

A zoomed-in clip of Dr. Birx’s reaction to these comments went viral on Friday.

Ingesting bleach or disinfectants is dangerous and experts strongly warn against it. Disinfectant-related poisonings have risen since the coronavirus crisis began, as Americans have tried to disinfect more surfaces and sometimes even their food (which is dangerous and unnecessary.)

The President’s comments were widely criticized. Reckitt Benckiser, the company that distributes Lysol, released a statement warning against the ingestion of their products.

When asked about his comments a day later, President Trump told reporters that he was “asking a question sarcastically.” But earlier that day White House press secretary Kayleigh McEnany had said the media took his comments out of context. “President Trump has repeatedly said that Americans should consult with medical doctors regarding coronavirus treatment, a point that he emphasized again during yesterday’s briefing,” she said, according to Politico. “Leave it to the media to irresponsibly take President Trump out of context and run with negative headlines.”

The White House also revised its transcript of the April 23 briefing regarding comments Dr. Birx made on the validity of sunlight as a treatment for the virus, according to USA Today. The President asked Dr. Birx during the briefing, “Have you ever heard of that? The heat and the light, relative to certain viruses, yes, but relative to this virus?”

“Not as a treatment,” she responded, while noting the conditions can help a body respond to fever. The original transcript had reportedly quoted her instead as saying, “That is a treatment.”

On Friday, Axios reported that the President plans to cut back on his daily coronavirus press briefings due to concerns of over exposure, which the controversy over his April 23 comments may have contributed to. During Friday’s briefing, the President spoke for under half an hour and took no questions.

As of Saturday morning, April 25, the U.S. has at least 905,364 confirmed cases of the virus and at least 51,949 confirmed deaths, according to a tracker by Johns Hopkins University. 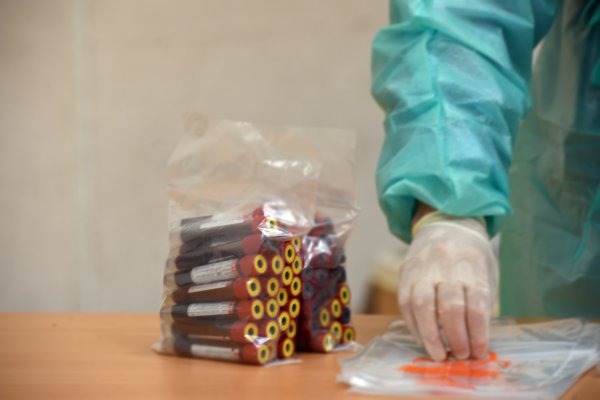 WHO: 'No Evidence' COVID-19 Antibodies Protect From Re-infection
Next Up: Editor's Pick