Hokkaido Governor Naomichi Suzuki (R) declares a state of emergency during a meeting on the new COVID-19 coronavirus in Hokkaido prefecture on Feb. 28, 2020.
STR/Jiji Press/AFP/Getty Images
By Abigail Leonard / Tokyo

Japan’s northern island of Hokkaido offers a grim lesson in the next phase of the battle against COVID-19. It acted quickly and contained an early outbreak of the coronavirus with a 3-week lockdown. But, when the governor lifted restrictions, a second wave of infections hit even harder. Twenty-six days later, the island was forced back into lockdown.

A doctor who helped coordinate the government response says he wishes they’d done things differently. “Now I regret it, we should not have lifted the first state of emergency,” Dr. Kiyoshi Nagase, chairman of the Hokkaido Medical Association, tells TIME.

Hokkaido’s story is a sobering reality check for leaders across the world as they consider easing coronavirus lockdowns: Experts say restrictions were lifted too quickly and too soon because of pressure from local businesses, coupled with a false sense of security in its declining infection rate.

“Hokkaido shows, for example, that what’s happening in the U.S. with individual governors opening up is very dangerous; of course you can’t close interstate traffic but you need to put controls in place,” says Kazuto Suzuki, Vice Dean of International Politics at Hokkaido University. “That’s what we now know: Even if you control the first wave, you can’t relax.”

The Japanese prefecture of 5.3 million people, known for its rugged mountain beauty and long history of farming and fishing, was the first area of Japan to see a major coronavirus outbreak. It’s very different from Japan’s main island, Honshu, with its frenetic sprawling cities. And its response to COVID-19 has also been very different. Hokkaido’s leaders acted early and decisively, even as the national government was criticized for moving too slowly to stop the spread elsewhere. Japan still has relatively few confirmed COVID-19 cases compared to other countries—12,400—but the numbers have more than doubled in the last two weeks, alarming international health officials.

Hokkaido’s story starts Jan. 31, at the annual snow festival in the island’s capital city of Sapporo. More than 2 million people attended the wintry carnival, to marvel at giant ice sculptures and dine on crab hotpot. Many were Chinese tourists, on vacation for the Lunar New Year.

Around the start of the festival, Hokkaido doctors saw their first coronavirus patient, a woman from Wuhan, China. Then several more Chinese tourists fell ill and soon the virus was circulating in the general population.

On Feb. 28, exactly a month after the first case was reported, there were 66 cases, the highest of any prefecture in Japan, and infections were accelerating, so the governor declared a state of emergency. At a press conference at the time, Nagase praised the government’s fast response and said it could be a model for the country.

Schools closed, as did many restaurants and businesses, even though they weren’t legally compelled to shut. In Japan, the government can’t use police or military to enforce a lockdown, it can only ask—and in some cases beg—businesses to close. That’s in part because the country’s constitution, written after the Second World War with the help of the Americans, has strict protections for civil liberties in order to avoid a return to fascism.

Mostly though, people complied. “Hokkaido residents are pretty obedient, plus it’s cold that time of year, so people usually lock themselves inside with a hot water heater anyway,” said Yoshfumi Tokosumi, a former editor for the Hokkaido Shimbun newspaper.

By mid-March, the health crisis was stabilizing—new cases were in the low single digits and even zero on some days—but complaints from businesses were increasing.

Hokkaido’s two main industries—agriculture and tourism—had been devastated. Farmers watched produce rot because restaurants and school lunch programs stopped buying it. An estimated 50 food processing companies went bankrupt. And Hokkaido’s dairy industry was hit so hard that the Ministry of Agriculture launched a video campaign featuring a ministry official dressed as a cow, to encourage people to drink more milk.

Similarly, tourism was decimated by travel restrictions and the state of emergency measures. In Kutchan, a resort area that gets more snow than almost anywhere else on Earth, skiers and other tourists vanished, says Mayor Kazushi Monji. “We’ve seen almost no new hotel reservations since the state of emergency was declared and the damage to small businesses has been severe.”

Rishiriya Minoya, a 30-year-old seaweed company in Otaru, saw sales drop 95% from last year. Owner Kazuomi Minoya, 50, who inherited the business from his father has struggled to keep it afloat with so few tourists and local shoppers. Across the island, bar owners, taxi drivers and restaurateurs recounted similar stories.

In March, Hokkaido Governor Naomichi Suzuki grappled with whether to maintain the lockdown and endure more economic pain, or lift it and risk the health consequences. Suzuki is a popular figure, with a nearly 90% approval rating. At 39, he’s the country’s youngest governor. He also has close ties to the national government, which enjoys strong support from the business sector and is responsive to pressure from it, says Suzuki, the international politics professor.

“Hokkaido’s business sector was opposed to the state of emergency, but the governor also wanted Hokkaido to be an example to the rest of Japan for how to control the virus,” says Aya Hasegawa, a reporter for the Hokkaido Shimbun newspaper.

On March 18, Suzuki assembled his advisers and decided it was time to ease restrictions. Nagase, the doctor who helped coordinate the government’s response, says that at that time, officials had only a limited understanding of the virus and how quickly it could spread. “Hokkaido was the first big outbreak here, so we were really operating in the dark.” Without sufficient data, doctors based their recommendations on the idea that the coronavirus spread like influenza. Nagase says he now regrets not pushing for more testing from the beginning.

The next day, the governor announced he would lift the state of emergency, but asked residents to continue to restrict social interaction and stay home if they felt unwell. He also said Hokkaido would keep 34 government-run facilities closed, as well as many schools. He called it “The Hokkaido Model,” in which residents would work to prevent infection while still continuing social and economic activities.

Second wave is bigger than the first

The announcement lifting restrictions came just before a three-day weekend; Hokkaido residents spilled onto streets and lingered in cafes, celebrating the conclusion of their weeks-long confinement. That likely kicked off the second wave of infections, says Nagase.

Further fueling it, people from other parts of Japan saw that Hokkaido had relaxed restrictions and began travelling there. Some were university students in big cities, who returned home to Hokkaido when classes were cancelled in April, says Nagase. Others were employees of large companies that typically start new job rotations at that time of year; when the state of emergency was lifted, businesses sent a fresh crop of workers from Tokyo and Osaka to Hokkaido.

That likely seeded even more infections and soon the second outbreak was in full bloom. By April 9—exactly three weeks after the lockdown was lifted—there was a record number of new cases: 18 in one day. “Officials thought about people coming from overseas but never considered that domestic migration could bring the virus back,” said Hironori Sasada, professor of Japanese politics at Hokkaido University.

On April 14, Hokkaido was forced to announce a state of emergency for a second time. The island had 279 reported cases, an increase of about 80% from when the governor lifted the first lockdown less than a month before. As of Wednesday, there were 495 cases in Hokkaido.

Businesses are now preparing for the long haul. Tetsuya Fujiawara, CEO of Smile Sol, a group of ten pub restaurants in Hokkaido, says even though sales are down 60%, he’d rather a strong, consistent lockdown than “lukewarm measures” that would only perpetuate the cycle of restrictions being lifted and then reinstated as infections resurge.

Nagase worries that Japan as a whole has not learned from Hokkaido’s mistakes, though. “I’m on the board of the Japan Medical Association and we’ve been pushing the central government for stronger national measures, but it comes back to the economy: because of the economic situation, it’s really hard to lock down in Japan.”

Prime Minister Shinzo Abe did announce a state of emergency on April 7 for seven prefectures, but did not include Hokkaido. On April 16, he extended it nationwide, noting that the virus was spreading as people moved between prefectures. In early May, the country will celebrate one of its biggest holidays of the year, Golden Week, when people typically travel around the country on vacation. National officials have advised people to stay put and Suzuki, the Hokkaido governor, has warned against non-essential outings.

As for Nagase, the doctor involved in Hokkaido’s response, the hard lesson he and the prefecture have learned, he says, is that until there’s a vaccine or medicine, everyone has to take personal responsibility and understand that, “it really may not be until next year that we can safely lift these lockdowns.”

—With reporting by MAYAKO SHIBATA and MAKIKO SEGAWA 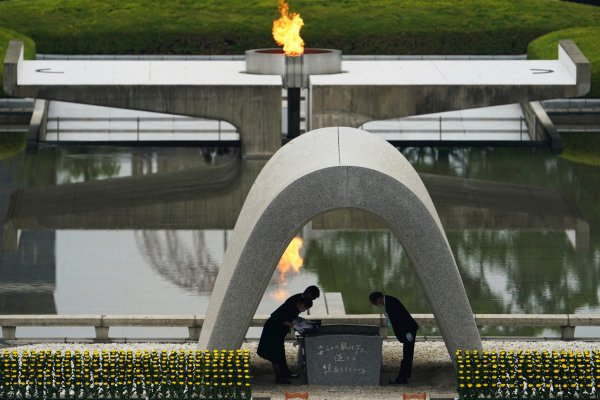