Why 2020 Could Be Another False Equivalence Election

President Donald Trump has an uncanny ability to project his own weaknesses onto his opponent: He’s rubber, you’re glue, whatever you say bounces off him and sticks to you. It’s a strategy that worked remarkably well against Hillary Clinton. He nicknamed her “Crooked Hillary” while his campaign was under federal investigation for ties to Russia. He reignited the debate over her husband’s sexual misconduct after multiple women came forward to accuse Trump of sexual assault, which he denies. He even accused Clinton of fomenting the ‘birther’ conspiracy theory about Barack Obama. Reminder: it was Trump who did that.

This week, Donald Trump Jr. wrote an op-ed arguing that “Joe Biden is the Hillary Clinton retread of 2020,” suggesting that the campaign plans to repeat the 2016 playbook. Trump is already trying to be the rubber in the 2020 campaign. The question is whether Biden will be the glue.

Some Republicans believe Trump’s strategy will work because, they say, Biden is already vulnerable to it. Where Democrats have spent years arguing that Trump is a sexual predator who is beholden to foreign powers and mentally unfit for the Presidency, the Trump campaign is gearing up to make the exact same arguments about Joe Biden. “While Biden is a consensus candidate, the same arguments that can be made about Trump can kind of be turned around,” says Republican strategist Tyler Brown. Which can work as “long as they have one sliver to say, ‘Here’s that case everyone’s heard of.’”

Biden’s defenders reject the idea that there are any slivers of truth to begin with, and point out that many of Trump’s attacks on Biden have been widely dismissed by fact checkers. They say Trump’s tactics reflect political weakness and the fact that Biden is gaining ground on Trump in some key battleground states. And the Biden campaign is on high alert for false equivalence in the media, which Democrats say helped Trump’s attacks against stick to Clinton in 2016.

That doesn’t worry Republicans much. “Whether it’s a false equivalence is by nature kind of moot,” says Brown. “The way people consume information, it kind of nullifies whether it’s false or not. It becomes less a values question and more of a volume question.”

The first rumblings started last year, when Trump alleged without providing evidence that Biden had benefited from his son Hunter’s role at a Ukrainian natural gas company even as Trump’s own children were appearing to promote Trump business interests everywhere from Aberdeen to Jakarta to India. Says Biden spokesman Mike Gwin, “He literally got himself impeached pursuing this false equivalency and trying to peddle this smear against Biden.”

That hasn’t deterred Trump’s Rubber vs Glue tactics. Democrats have long accused Trump of being too close to foreign adversaries (see: his cozy relationship with Putin, his friendship with Kim Jung Un, his warm embrace of dictators from Saudi Arabia to Turkey.) Now, Trump accuses Biden of cowing to China, tweeting that Biden is China’s “dream candidate” and releasing a misleading ad accusing him of protecting “China’s feelings.” Fact-checkers have debunked Trump’s claim that Biden was soft on China.

Democrats have criticized Trump’s misleading and bizarre press conferences during the coronavirus pandemic. Now, the Trump campaign is starting a drumbeat of ads designed to paint the gaffe-prone and rambling 77-year old Biden as senile and mentally unfit. “People are going to rue the day that they were questioning Donald Trump’s mental fitness, or ability to speak clearly, or you know, wherewithal for the job,” one White House official told TIME. “They’re going to rue that day.”

These are not exactly complicated campaign maneuvers. Trump is skilled at the age-old political trick of blowing enough smoke at his opponents so that voters assume there’s a fire there, even when he’s being consumed in his own conflagration. One Republican strategist called it “the ultimate whataboutism.” It also reflects the political rule that the best defense is a good offense. “It’s a tendency of most people in politics when they take fire to freeze and bunker,” says Brad Todd, Republican strategist and author of The Great Revolt. “President Trump understands that when you take fire you fire through it.”

For Democrats, it’s exhausting, and demoralizing. Which is the point. By framing the race as a “‘lesser of two evils,’ they’re trying to hurt turnout,” says Jen Palmieri, former communications director for Clinton. “It’s a very corrosive strategy, but it has an impact on people.”

In search of a defense, some Democrats are already looking at the role of the media. Many veterans of the 2016 Clinton campaign believe that media coverage of the Trump-Clinton race reinforced Trump’s attacks on Clinton, feeding his campaign’s narrative that the candidates were equivalently flawed and that the choice was between “two evils.” “‘Objectivity’ equated to: if I did a bad story about Trump, I had to do a bad story about Clinton,” says Palmieri. Strategists say a similar pattern is emerging in 2020. “Trump is up there spewing lies and Joe Biden has one slip of the tongue and the Trump campaign weaponizes it and then the media says, ‘Oh, Biden messed that up,’” says Ian Sams, a spokesman for Clinton in 2016 and Kamala Harris in 2020.

Biden backers say he may be less vulnerable than Clinton was to the fog of false equivalence coming his way. Biden is a known quantity with consistently high favorability ratings since he left the Vice Presidency. Clinton had been tarred with right-wing vitriol for decades, which softened the ground for many of the attacks against her. “It cemented in voters minds a skepticism and an undercurrent and dislike towards her that Joe Biden just doesn’t have,” says Sams. “That allowed Trump’s attacks to catch on with voters in a way that I don’t think they will with Biden.”

Democrats also argue that much of the 2016 skepticism had to do with Clinton’s gender. Biden may benefit from a leniency that is rarely offered to women candidates. “The public is much more eager to forgive men’s mistakes than women’s mistakes,” Sams adds.

Lastly, every strategy works best when it’s deployed for the first time. The fact that this playbook has been run before could make it less effective. “There are antibodies in the system now, because people hear Trump tell lies all the time,” says Palmieri. “There are a lot of reasons to believe that Biden’s going to have an easier time navigating that than we did. And you don’t need to do that much better than we did to win.”

But the most important answer to whether Trump’s attacks will stick to Biden may have nothing to do with the President’s rubber vs. glue tactics. Voters will be making their 2020 decisions based on four years of a Trump presidency. While Trump had hoped that would mean a referendum on economic gains and perceived disruption of D.C., now it is more likely to focus on pandemic, mass unemployment, impeachment and near constant chaos coming from the White House. And it’s hard to see how Trump could accuse Biden of any of that.

—With reporting by Tessa Berenson/Washington 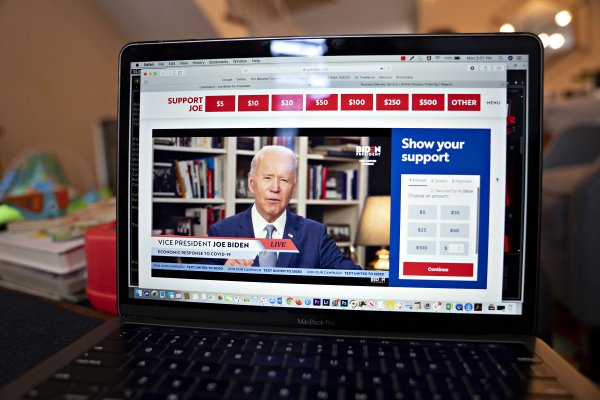 Joe Biden Adapts to a Digital Campaign
Next Up: Editor's Pick