The Coronavirus Is Hitting Our Nation's Prisons and Jails Hard. And It's Exposing a Crisis That Existed Long Before the Outbreak

Signs pleading for help hang in windows at the Cook County jail complex on April 09, 2020 in Chicago.
Scott Olson—Getty Images
Ideas
By Joyce White Vance
Vance is distinguished professor of the practice of law at the University of Alabama, a former U.S. Attorney for the Northern District of Alabama and an NBC News and MSNBC legal analyst.

The news from the nation’s prisons and jails is increasingly grim. On Sunday, there were reports that 1,828 people incarcerated at Marion County Correctional Facility in Ohio, 73% of its total population, have tested positive for COVID-19. One staff member has died and another 109 have tested positive. Similar reports are coming in from federal and state facilities across the country. But this crisis in our criminal justice system isn’t due to the coronavirus. Rather, the pandemic is exposing a pre-existing crisis in our prisons that we are long overdue to fix.

In April 2019, the Justice Department issued a damning report concluding that conditions in Alabama’s men’s prisons were so bad that there was probable cause to believe that incarceration in the state’s prisons constituted cruel and unusual punishment. The state’s prisons were old and decrepit. There were clogged toilets, mold-covered showers and inadequate hot water. In January 2020, Alabama’s prisons were at 170% capacity, the most overcrowded in the nation. One facility, Holman Prison, was in such bad condition that it was partially closed in January, after investigators learned of open sewage in the prison and prisoners reported rats roaming around and maggots in the kitchens.

While Alabama’s failings may be extreme, the state is not alone. Problems in the nation’s federal and state prisons as well as its jails have been well documented. In facilities throughout the country, incarcerated people have no opportunity to engage in frequent handwashing, obtain masks that could prevent the spread of infection or maintain a safe distance from others with contagious diseases. This country’s jails and prisons were not prepared to contain an outbreak of the common cold, let alone a pandemic.

How we treat the most marginalized people in our society truly defines who we are. So as we take stock in the midst of a pandemic in which the federal government and the states have struggled to meaningfully protect people in custody, the criminal justice system’s real failure is not that it didn’t have a pandemic plan in place, though the consequences of that are evident and tragic. It’s that for decades our penal system has done little to relieve overcrowding and provide humane conditions for those in custody, to say nothing of meaningful opportunities for rehabilitation and preparation for reentry. A few celebrity pardons and a (not fully funded although much vaunted) First Step Act do not constitute substantial criminal justice reform, and we remain, in large part, heedless of the fact that the treatment prisoners receive while incarcerated will continue to shape them once they have returned to their communities.

Other countries have better models.

In Norway, recidivism rates are among the lowest in the world: about 25%, as opposed to long-term rates as high as 77% in the U.S. Prisons look more like college campuses and prisoners receive education to prepare them for life after incarceration. Holland had to shutter and repurpose 19 prisons in 2013 after the success of strategies that returned people to contribute to their communities with monitoring and support, instead of using taxpayer dollars to warehouse them in prisons.

In recent years, North Dakota’s prisons have turned to Norwegian strategies. The state’s Department of Corrections and Rehabilitation now refers to people in custody as residents, not inmates, and provides opportunities for them to learn and prepare for their eventual reentry into society. Even Alabama has employed methods of helping people when they return to the community, opening four day reporting centers for people who are at a high risk of reoffending after release from prison to provide them with the daily support they need to stay on track. Still, the U.S. has the highest rate of incarceration in the world. According to a 2018 report from the Bureau of Justice Statistics, we had almost 2.2 million adults in jails and prisons at the end of 2016.

The longstanding problems facing our prisons will not end when the pandemic does, but the spotlight that the coronavirus is shining on our nation’s criminal justice system presents us with the opportunity to choose who we want to be when we emerge: Do we want to be a society that incarcerates people like animals in overcrowded, decaying prisons, or do we want to transform our criminal justice system to emphasize true rehabilitation as well as deterrence? We have an opportunity to make our prisons safe places where people can prepare to successfully reenter and serve their communities, instead of overcrowded facilities that become potential pandemic death traps. This crisis brings our choices and their consequences into sharp focus. It’s time for real criminal justice reform. 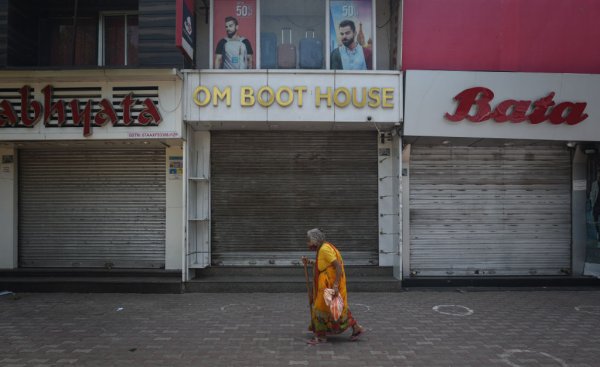 India's Capital to Lock Down as Coronavirus Cases Soar
Next Up: Editor's Pick