Travelers wait in line for a charter flight coordinated by the United States embassy to take them home at the La Aurora international airport in Guatemala City on March 23, 2020.
Johan Ordonez— AFP/Getty Images
By Kimberly Dozier

On a normal day, U.S. Consular Agent Marian Han Nguyen’s duties in her sleepy one-woman office in Cusco, Peru, range from stamping passports to registering American babies. But when Lima announced it was closing Peru’s borders on March 16 to stop the spread of coronavirus, Nguyen’s job changed overnight to Lara-Croft-style bounty hunter. She had 24 hours to track down an unknown number of Americans trekking the Incan ruins of Machu Piccu, a five-hour train ride away, so they could escape before its airports shut. Then she had to figure out how to get anyone else left home.

Nguyen reached out on social media groups for U.S. trekkers and handed out her personal cell number to just about any American who called or emailed. When authorities shut down car traffic, Nguyen, five months pregnant, walked roughly 45 minutes each way to her office through the high-altitude Andean city, negotiating police checkpoints. Eventually, she helped some 1,300 Americans return on 10 chartered flights. She and her husband are staying put, as are the 30 or so Americans she keeps in touch with still in Cusco. And at the six-month mark of her pregnancy, she tries not to overreact if she coughs or sniffles.

Nguyen is part of a global network of hundreds of State Department and other U.S. officials working to get Americans home before — and after — borders across the world have slammed shut due to the coronavirus pandemic. So far, the State Department has repatriated some 65,000 U.S. citizens since a group of Americans in Wuhan boarded the first U.S. chartered flight home on January 29, assisted by officers like diplomat William Cocks from the U.S. Consulate in Shanghai. He had hours to pack up his own family’s home, then help get dozens of scared Americans onto a repurposed cargo plane and fly with them to California, all the while clad in a hazmat “space suit” to protect him from the virus.

Almost four months later, roughly 15,000 Americans worldwide are still on the State Department’s waiting list to fly back. The 24/7 crisis cell, run by State’s Principal Deputy Assistant Secretary for Consular Affairs Ian Brownlee, coordinates a global, multi-agency team that has rented boats for Americans marooned on the Amazon, redirected a U.S. plane monitoring the illegal drug trade in Latin America to ferry Americans from remote areas to larger airports, and sent a bus to the edge of the Sahara to fetch American campers. After scrambling to find aircraft to transport some 1,500 Americans who wanted to fly home, Jennifer Rasamimanana, U.S. Consul General in Casablanca, Morocco, found herself shouting to team members: “We got planes! We got planes!”

It hasn’t all gone so smoothly. In Cusco, the Peruvian authorities quarantined one group of mostly American backpackers in their hostel for weeks after two guests reportedly contracted COVID-19, then sprayed them with a liquid smelling of bleach before they were eventually allowed to leave. Several had to come back on a State Department medevac plane, because they’d been “exposed to the virus,” Brownlee says.

Other times, Americans have requested seats on departing flights, then changed their minds at the airport. Rasamimanana recalls securing one of those coveted spots for a surfer who showed up at the Casablanca airport only with his surfboard. He told her he had “waited to the last minute” to go so he could “get that one great wave.”

But many Americans also feel the government should be doing more. They have complained on social media that they weren’t able reach someone like Rasamimanana or Nguyen, or when they did, they were told to expect to shelter in place in countries were hotels were being shuttered and foreigners were unwelcome, seen as carriers of the pandemic.

Some say they simply can’t afford to leave. On an open WhatsApp group of Americans debating whether to depart South Africa, members griped that pre-COVID-19, they could get a flight home for under a thousand dollars, but were now expected to pay at least twice that. Yogini Tatiana Dennis decided to leave South Africa despite the cost after her work counseling HIV patients was canceled because of the pandemic. “I was heartbroken… I had no other place to go but home,” she wrote in an email.

U.N. Peacekeeper Natalie Kosloff says a State Department employee convinced her to leave her post in Goma, in the Democratic Republic of Congo. She has asthma, a pre-existing condition that could make her more vulnerable to the virus, and the diplomat warned her that the panic over the pandemic could spark civil unrest — and possible attacks on foreigners who were being blamed for bringing in the virus. “I was very scared of finding myself in a situation that I could not actually have any medical care,” she recalls from Washington, DC, where she is living in an Airbnb and working remotely. She’s promised to pay the U.S. State Department back the $3,500 it cost to fly on a UK embassy flight from Goma to Washington by way of London, and estimates the whole experience will have cost her around $10,000 out of pocket.

By law, the State Department charges a median full-fare price for the planes it charters, and commercial carriers are hiking up costs to make up for flying with sometimes near-empty planes. If Americans don’t repay the promissory notes, legally binding IOUs that they sign before boarding the flights, by U.S. law, they risk not being issued a new passport.

Megan Phaneuf, Acting Consul General in Quito, Ecuador, says that her team has spent hours on the phone with undecided Americans who are “a little bit stuck…They want to go but they don’t have the money.” She says she tries to help them think through their options: Do they have family to borrow money from to travel? Do they have the resources to stay in the country? The goal is to “finally get them to a point where they’re going to be happy with their decision,” she says. “We can’t make it for them.” The State Department also offers short-term loans for travelers who don’t have the funds to get home.

Phaneuf and her team in Ecuador have helped evacuate 3,400 people, giving them letters of safe passage to get them through curfew-closed streets. But there are the roughly 90,000 American retirees in Ecuador who are “planning on sticking around,” she says. For them, the decision is more complicated, because they would be leaving their full-time homes, perhaps to stay with grown children who could present an infection risk to them.

Brownlee is blunt with his advice to those who have decided to stay: think about where you are, and if you have the funds to last if the country shuts down travel, and your paycheck stops. Think about whether you could get medical treatment if you contract the virus, or if you could get treatment if you have another illness. Do you have a home in the continental United States where you could ride out the coming storm, or as he likens it, the “tsunami that’s roaring toward the beach” following the earthquake that is COVID-19?

Don’t expect the U.S. embassy or consulate near you to tell you what to do. “We generally don’t tell people now is the time to get out of that country… We encourage people to assess their own situation,” Brownlee says. But he says, “If you choose to remain overseas, you should be prepared to remain where you are for the foreseeable future.” 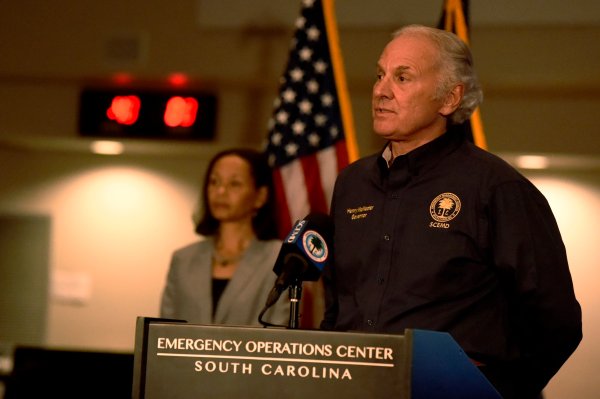 Georgia, South Carolina to Reopen Businesses
Next Up: Editor's Pick