Love & Basketball Was More Than a Movie. It Changed My Whole Life

When Gina Prince-Bythewood’s Love & Basketball was released 20 years ago, it was celebrated as a mainstream romantic film featuring Black characters, but I treasured it for so much more.

I was living in Cambridge, Mass., nearing the end of my first year at Harvard Law School, but I had no desire to be a lawyer. I’d gone to law school because my father was a lawyer and expected me to become one, too. But the gray gloominess that hung over New England was becoming hard to distinguish from the gloom I felt in myself. I was lost in it—trapped inside an impossible cloud of other people’s opinions and expectations.

Then a bright star came into view. A young, brown-skinned girl wearing an L.A. Lakers cap and a can’t-tell-me-nothing attitude. Sitting in the Harvard Square movie theater, between two of my girls from class, I watched Monica Wright roll up on her new neighbor and his friends playing basketball and ask if she could join.

“Ball better than you,” Monica snaps back. The boys grudgingly let her play, and she schools them. “I’m gonna be the first girl in the NBA,” she says. (The WNBA didn’t exist yet.)

“No, I’m gonna be in the NBA. You’re gonna be my cheerleader,” Quincy replies before Monica beats him to the basket. Desperate to stop her, he shoves her into the grass. In the next scene, a fresh cut is bleeding on Monica’s chin and her mother is cleaning it in the bathroom while scolding her for “running around like a little boy.” Annoyed, Monica yanks her head away, eyes her new wound in the mirror and smiles.

Looking up at this strong-willed girl who knew exactly who she was and what she wanted in life, a light flicked on inside me. It was like she was showing me parts of myself I’d forgotten about, ignored or maybe never knew were there.

It might have crossed my mind to yank my head away from my mother as a child, but I wouldn’t have dared. Growing up, I was a good girl. I never got in trouble. I did what I was told. I played basketball in high school even though it wasn’t my thing. I went to church. Made straight A’s. Didn’t curse, drink or smoke. I’d become a master at taming, hiding and cutting out the parts of myself that weren’t compatible with the person other people wanted me to be: the rebellious, curious and sexy parts; the questioning and fearless parts. The free parts.

That mastery had led me to the most prestigious law school in the country. But I hated this sanitized, diminished version of myself. I was uncomfortable inside her—sad, confused and anxious. And I was starting to get this terrifying sense that if I stayed in law school, I could get trapped in her the rest of my life.

No way Monica would let that happen to her. Flash-forward to later in the movie: she’s a high school senior (played by Sanaa Lathan), sitting at the dining table, listening to her dad urge her to consider options besides playing basketball. There’s only one game left in the season, and—unlike Quincy (Omar Epps), who has his choice of colleges to play for—Monica hasn’t been recruited yet. But her vision of herself as a ball player holds strong. “There’s still a chance!” she yells, defending her dream.

Sitting there in that darkened theater, I didn’t even have a dream. I’d been trying to become a lawyer for so long that I had no idea what I wanted for my future. But what was I supposed to do, drop out and find myself? Impossible. I couldn’t even entertain the question without the fear of judgment in my ear: Have you lost your mind? What kind of fool drops out of Harvard Law School?

But up on the big screen, Monica isn’t letting her dad, her fear or anyone else tell her what to do. She doesn’t get there that day—her team loses the game. But a few days later, Monica gets a letter from USC. They want her! On top of that, Quincy will be playing there, too. In the grassy patch between their bedroom windows, he reaches for a congratulatory hug, but Monica takes a kiss.

Monica may know what she wants in life, but getting it isn’t easy. While playing at USC and then overseas, she encounters more haters and difficulties. And of course, she and Quincy have their drama to get through. But at the end of the movie, Monica’s running onto the court in a Los Angeles Sparks uniform with Quincy cheering her on from the sidelines. She’s living a life of her own, one she created. It took dismissing the pressures from everyone else and standing strong in herself. Not easy—but possible.

I didn’t know what I wanted my future to look like. But 20 years ago, watching this movie, I knew I had to have the guts to find out. After finishing my first year of law school, I didn’t go back.

And, as expected, people called me crazy. At times, I felt alone and scared. But the freedom and aliveness that came with being more at home in myself kept me pushing forward. I went on a winding path through the sports and entertainment industries and the interior design field. And then one night, I sat down at my drafting table and started writing. It felt like being united with a huge piece of my identity.

Now I write books for young adults. My latest is the love story of two high school basketball players. Unlike Monica—a ball player at heart, who knows exactly what she wants—my heroine hates basketball and has no idea what to do with her life after graduation. Through my novels, I hope to pass on the same message that Love & Basketball gifted me with 20 years ago: feel free to be yourself and create the life you want.

Don’t think I’m preaching this message from the mountaintop. I’m still working to be free, still learning how to live outside of fear as I shape my professional space as an author. But for me, Monica Wright will always be a shining example of what’s possible when we have the courage to stand alone in the truth of ourselves. On the 20th anniversary of Love & Basketball, you may revisit the movie craving romance—and trust, the chemistry between Monica and Quincy is there. But be prepared to leave it belonging a little more to yourself.

Liara Tamani is the author of the upcoming novel All The Things We Never Knew (Greenwillow/HarperCollins). 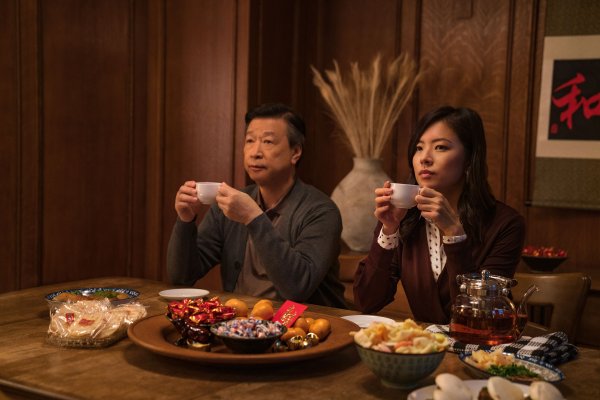 'We Are Perpetual Foreigners.' Tzi Ma Talks Tigertail, Mulan and Anti-Asian Bigotry During Coronavirus
Next Up: Editor's Pick