The Science Behind Your Weird Coronavirus Dreams (And Nightmares)

Earlier this month, my friend Claire Arkin, 30, a non-profit worker in Berkeley, Cali., told me she’d been having oddly vivid and specific dreams. In one, she was getting dressed to attend a fancy gala, but instead of donning an evening gown and diamonds, she wrapped herself in toilet paper, “like some kind of f–ked up status symbol,” she said. A few nights later, she dreamt about men she’d met on a fictional dating app making her anxious by not staying the social distance-required six feet away from her.

Many people have been paying attention to their dreams more during the global coronavirus crisis. As various places around the world announced lockdowns, I started to notice an increasing number of people in those locations posting on social media, asking whether they were the only ones having bizarre and memorable dreams. Some people who claimed to never remember their dreams said they were recalling them for the first time.

A recent “dream survey” conducted by Deirdre Leigh Barrett, an assistant professor of psychology at Harvard Medical School, seems to confirm that the incidence of vivid dreams has increased as the virus has spread around the world. This would not be unprecedented: studies have shown that events like 9/11 changed the way people dreamed for a time, making their dreams more intense and memorable in the days after the attacks. It seems feasible that the coronavirus pandemic, which has personally impacted almost everyone on Earth, could have a similar impact.

Untangling how and why events like these affect our dreams, however, is difficult. Despite huge popular interest in the subject, dreaming is still fairly poorly understood by science. We know that our brains use sleep to encode long-term memories, and we also know that dreams are either a part of this process, or a byproduct of it. Some studies show that rapid eye movement (REM) sleep, the sleep stage in which we have the most vivid dreams, is also crucial for our health, aiding in emotional regulation and learning. But the complex interactions between the events in our daily lives and our dreams is still not entirely understood.

One thing we can say for certain is that the current coronavirus crisis has led to a great deal of stress and anxiety for many millions of people. Research has shown that increased anxiety during the day can lead to more negative content in dreams, something several people I spoke to about their COVID-19-related dreams reported. They described dreams about dead bodies, watching friends or themselves attacked or killed, and other terrifying, surreal events that felt disturbingly real.

“One dream I remember vividly from a week or so ago was watching a good friend of mine be choked to death on the ceiling by a giant black snake that looked like an anaconda,” says Colby Rutledge, 30, who lives in New Haven, Conn., and works for a family child care organization.

Stress and anxiety can also cause us to remember more of our dreams, because they disrupt our sleep. Good sleepers may find it hard to believe, but everyone wakes up naturally several times in the night, at the end of each 90 minute sleep cycle. Without these brief awakenings, we wouldn’t remember our dreams at all, according to Michael Nadorff, the director of the clinical PhD program at the Mississippi State University psychology department and an expert on the link between nightmares and mental illness.

Nadorff says that when we wake up, our brains take about five minutes to start encoding memory. This means that if you wake up for a few seconds, you won’t remember, but you will recall being awake for 10 minutes. And if you have a higher level of anxiety, you’re more likely to stay awake long enough to encode memories, and thus remember more of your dreams.

“In general my sleep has been pretty poor this past month,” says Veronica Torres, 34, a musician who lives in Brooklyn. “I’ve been waking up several times to go to the bathroom and waking up to check my phone to see if I can start another day yet. I think it’s my body trying to express the anxiety of this moment in time. Mainly in nightmares.”

An increase in vivid dreams could also be explained by the changes that the pandemic has forced on people’s lifestyles, explains Courtney Bolstad, a graduate student at Mississippi State who works as Nadorff’s research assistant. “Social rhythm theory says that the rhythms we have during the day, what time we get up, whether we see our friends, can influence our circadian rhythm,” Bolstad says. “If you aren’t doing the things you typically do during the day, that could mess with your circadian rhythm which could mess with your sleep.”

The most intense bouts of REM sleep tend to happen later in your sleep cycle, says Bolstad. If you’re sleeping in later because you’re out of work or working from home, it’s more likely you’ll get to those longer, deeper periods of REM, which produce some of our most vivid dreams. And if anxiety is negatively impacting your sleep, your brain may try to “catch up” on REM sleep whenever it can, creating more bursts of vivid dreaming throughout the night.

Dreams are also connected to the brain’s encoding of memory—and emotion is a big part of which memories the brain decides are important enough to keep.

“The best consolidated memories are those with emotional content,” says Katja Valli, an associate professor in cognitive neuroscience at University of Skövde, Sweden. “Those memories are [the ones that are] most critical for survival and daily function. We get to forget mundane things like what we had for breakfast two weeks ago, but if you see a car crash or you have a fight with a friend, that’s emotionally salient and it gets consolidated more easily. This might also explain why our dreams tend to focus on emotional material.”

“I’ve been having dreams where my dad is alive and I’m confused,” says Elissa True, 30, who lives in Sonoma County, California and works at Whole Foods. Her father died late last year. “At the end of the dream I realize he really is dead, or that he’s not in the photo I just took of us, once I look at it again. The dreams are really detailed and super realistic. I wake up having to set myself straight.”

Sherry Margolin, 65, is a piano teacher and musician (and my second cousin) who lives in Paris, where everyone is currently confined to a one mile radius from where they live, unless they have special authorization. “Pre-pandemic, I had lots of dreams about playing live onstage or in rehearsal, but with unexpected twists like songs I’d never heard before or artists who are long dead,” she says. “Now I am dreaming about travel by train or a long car ride through Sonoma County, CA where I lived ages from ages 17 to 28.”

For the majority of people, the most dramatic way life has changed in this crisis is through decreased physical contact with the people they usually see. But that doesn’t mean those people have stopped appearing in our dreams. “I’ve been having dreams that feel incredibly real; they are conversations about resolutions with friends and exes,” says Bijal Shah, 34, who works in marketing in New York, told me. “It’s this strange clarity which continues even if I wake up.”

There has been little research done on the impact of social isolation on dreams, beyond a few case studies and unpublished doctoral theses. One as-yet-unpublished study led by Jarno Tuominen, Valli’s Ph.D student in psychology at the University of Turku, Finland, may offer some insight. His research was inspired by a concept called social simulation theory, which posits that dreams feature more social content than would be expected based on our daily lives, an adaptation that allows us to improve our social skills and thus increase our chances of reproducing successfully.

In Tuominen’s study—which is currently seeking peer review and publication—subjects were stripped of their smartphones and computers, and isolated on a remote Finnish island for a week. They were told to not interact with anyone, other than through paper notes to the experimenters. The subjects kept detailed dream journals before, during and after the isolation.

Another of Valli’s Ph.D students, Monica Bergman, conducted research based on interviews from the 1970s with Holocaust survivors who were imprisoned in the Auschwitz concentration camp during World War II. The resulting study (which has been accepted for publication in June) examines how dream content changed in the camps. It found that people remembered dreaming more about their close friends and family during their time in the camps, while separated from those people, than they did afterwards, when they were reunited.

These studies suggest that our dreams are sensitive to our social environments during the day, and could explain why some of us are dreaming more of close friends and family at the moment. Such dreams are laden with emotion, and are thus exactly the sort of dreams that the brain is likely to commit to memory.

“I had an embarrassingly obvious dream the other night,” says Emah Fox, 41, a musician in Melbourne, Australia. “I was driving down a highway and my family were following, but they had to stay 300 meters behind me. They ended up losing sight of me and we got completely separated and lost.”

Another Melbourne resident, Michelle Reeves, 38, who works in educational technology, said she’s been startled by dreams that included appearances from “my parents, my old dog, my cousin and lifelong bestie, my grandparents.” The dreams were “mostly set in events that happened when I was a kid.”

Ultimately, though, there’s little in the way of research into the effects of an event like this pandemic, for the simple reason that there’s never really been one like it. The most comparable crises—9/11, earthquakes, hurricanes—tend to involve a sudden, dramatic event and an accompanying wave of trauma and fear. Coronavirus, however, has produced a unique combination of boredom and constant low-level dread. Modern technology has allowed us to stay “together” while physically apart, meaning we aren’t truly isolated, even in quarantine. It’s still an open question how a Zoom call differs from an in-person hang out, but some research shows digital communication is less effective in bonding us or building relationships than seeing other people in-person.

The truth, however, is that scientists can’t say exactly what the pandemic is doing to our brains until they’ve had a chance to study it. Valli says that she is working with scientists around the world to start surveying people about their dreams during this time. “In a year we will know a lot more about this issue,” she says. “This crisis is personally impacting almost everyone. It’s an unfortunate worldwide naturalistic experiment.” 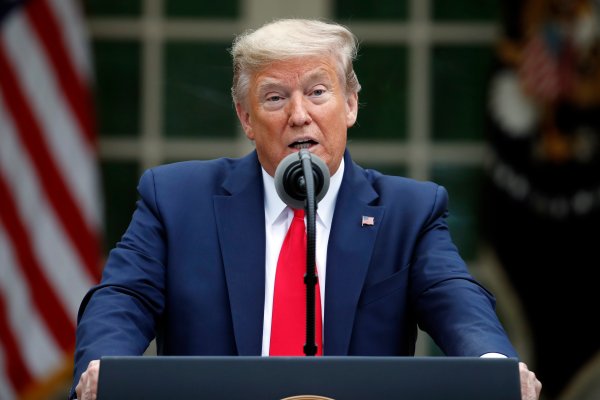 Trump's WHO Funding Cut Is a Gift to Beijing
Next Up: Editor's Pick