The cast of 'The Circle'
Mitch Jenkins—Netflix
By Megan McCluskey

As people across the world practice social distancing or self-isolation to curb the further spread of coronavirus, some are searching for new and innovative ways to connect with each other. And fans of the reality TV show The Circle may have found exactly what they’re looking for with online game versions of the series.

When season 1 of The Circle TV show premiered on Netflix on Jan. 1, the U.S. version of the U.K. reality competition series quickly became a trending topic of conversation. The show gained such a devoted following that, along with hit reality dating series Love Is Blind, Netflix has already renewed it for a second and third season.

But with season 2 not set to debut until 2021, some fans are turning to online versions of the game to fill the Circle-shaped hole in their hearts and connect with people who want to try their hand at the social experiment — especially in the midst of the coronavirus.

Hailed by some as a mixture of fellow reality shows Big Brother and Catfish with a dash of the Black Mirror episode “Nosedive,” The Circle isolates its millennial contestants in comfortably furnished individual apartments within the same building as they compete with each other to earn the top spot in the group’s rankings — a metric based on arbitrary factors determined by each player — and avoid being “blocked” and sent home. The twist? They can only communicate via profiles created on a specially designed social media platform, leaving it up to each player to decide whether their competitors are who they say they are.

In the first season of The Circle U.S., winner Joey Sasso as well as fan-favorite players Shubham “Shooby” Goel and Sammie Cimarelli were all original contestants who played unabashedly as themselves rather than catfish. And while genuine connection may not have been the primary goal of people virtually competing against each other for a $100,000 prize, for those three, it was a serendipitous by-product.

“Joey and I differed in almost every way, but complemented each other,” Goel told TIME in a January interview. “Sammie — we had a great chat about feeling like we were on the outside. There was a lot of truth to these genuine connections.”

When it comes to online versions of The Circle, there are some limitations that the show doesn’t contend with — a major one being that the people playing are still living their regular lives in the midst of the game. But without a major cash prize at stake, real connections between players are even more feasible.

Laura Cardona, who is currently hosting an online Circle game on the chat service Discord, tells TIME that her goal was to make the experience as authentic as possible. Cardona’s server, dubbed “The Circle,” allows players to chat amongst themselves as a group within designated timeframes and one-on-one or within smaller groups whenever they want — just like on the show. People tuning into the game as audience members can see every interaction that takes place — whether it’s flirting, forming an alliance or or just friendly bonding — and talk to each other in the audience chat.

“I’m not the first person to start [a Circle game online], but I saw a lack of authenticity in other games,” she says. “On other servers that were hosting The Circle, players could see each other’s [private] messages or there wouldn’t be replacement players like they have on the show for when someone gets eliminated.”

As the game’s moderator, Cardona says she narrowed down a field of about 150 applicants to eight original contestants (four male and four female) and four replacements using a two-step process. First, she put out a call on Reddit for people who were interested to fill out a logistics form with questions like “What time slots can you dedicate to participating?” and “What mini-games would you like to see?” After that, she sent out a follow-up character application form for people who could commit to the designated times of play — noting that players who don’t interact at least once daily or participate in at least one bi-weekly mini-game like “#Hashtag This” or “Who’s Most Likely To?” are disqualified — and received around 70 responses.

During the selection process, 20-year-old Cardona had to put on her casting director hat and look for similarities between applicants that could lead to genuine connections as well as personality traits that she thought would make for an interesting game.

“I was looking for things in their bios that matched up, like this person likes rollerskating and so does this person so I could see some synergy there,” she explains. “Another aspect I looked at was if people said things like ‘I like sarcasm’ or ‘I love drama.’ I had the mindset of looking for players who seemed like they would engage the most and bring a unique perspective that could stir the pot and make the game interesting for the audience members.”

A screenshot of the #circle-chat on "The Circle" server
Discord

Given that people can play as whoever they want, Cardona says that she was surprised by how few of the final 70 applicants wanted to play as someone other than themselves. “I think there were only four [people who wanted to play as a] catfish,” she says. “Most people were interested in playing as themselves, so the catfish were kind of an automatic yes because there were so few of them.”

People who have all played in as well as moderated Circle games on the popular Discord server “The Circle Online,” like Tyler Drey, Scott Haynes, and Ashley Johnson, have also found this to be a common thread. They agree that one of the difficult aspects of casting is finding enough people who want to play as catfish. “If you apply as a catfish you’ll most likely get in because most people apply as themselves,” Drey says.

However, although they can be hard to come by, Haynes and Johnson themselves have both played as catfish — to mixed results. Haynes says that for his first season, he decided to play as his girlfriend to see how convincing he could be. “She and I are very similar in a lot of ways but we have plenty of differences as well, so I wanted to see if I could be convincing enough as a girl to get far in the game,” he explains.

But as one of the four replacement players, Haynes says he felt like he was at an immediate disadvantage. “[The original players] had already cemented their alliances,” he explains. “I managed to make some alliances with the other new players and we had a whole strategy for trying to get the original people out, but things went downhill when one of our alliance members didn’t vote the way we wanted them to. I ended up getting blocked pretty soon after I joined.”

Johnson, on the other hand, says that she originally applied to play as a catfish because, as a secondary school teacher, she needs to be careful about her image online. “I wasn’t sure what the rules were about putting my real face out there,” she says. “But then halfway through the season my boss told me it was fine as long as I wasn’t acting inappropriately, so I was able to reveal my face at the end.”

Johnson adds that she made it to the finals of that season simply by being super friendly to her fellow players. “I made sure I had connections with everybody whether they were fake connections or not,” she explains. “I just made sure that everyone felt like they could come talk to me and that I would have their back.”

Like the show, both “The Circle” and “The Circle Online” versions of the game involve mini-games like trivia or Two Truths and a Lie that are intended to help the contestants get to know each other better. But Haynes says that, unlike on the show, the winners of “The Circle Online” icebreaker challenges are awarded small advantages.

“When I was playing, there was one challenge where everyone was given a Spotify playlist that they could add one song to and we all had to guess who added which song,” he says. “I ended up winning that challenge so I was given the ability to flip someone’s first place ranking with their last place ranking [during the ranking vote].”

Cardona’s ongoing season, which began April 10, is set to run for four weeks with biweekly eliminations and the occasional double elimination while “The Circle Online” seasons typically last for around two weeks. Johnson says that the moderators of “The Circle Online” are beginning the casting process for the server’s fifth season, which interested parties can apply for using this Google form. You can also join the other 750 members of the Discord server to watch the game as a spectator.

In the midst of many people staying home amid coronavirus, “The Circle Online” moderators have been trying to decrease downtime between seasons as much as possible.

“We’re making sure we get another game out as quickly as possible after one game ends because people are just sitting at home and they aren’t getting the amount of socialization they normally do,” Drey says. “Chatting with other people and saying good morning to someone else on a daily basis can be a positive emotional [outlet] and a positive way to keep ourselves busy.”

Johnson adds that the game can be an organic way to talk about your life with people who are genuinely interested in learning more about you.

“It’s a way of maintaining human connection that’s not physical,” she says. “We talk about lots of things; it’s not always game-focused. The players will talk about their lives in quarantine and share stories. Everyone’s like, ‘Tell me about what’s happening on your side of the world.’ It’s a really good way of making sure people aren’t feeling as lonely as they might think they are.”

Beyond the coronavirus, Haynes says that playing The Circle online can be a great way to connect with other people no matter what’s going on in the outside world.

“I made really genuine connections with everyone in the games I played,” he says. “I still talk to everyone from my first season and we’ve done a bunch of different stuff together since The Circle. It’s been a really amazing experience.” 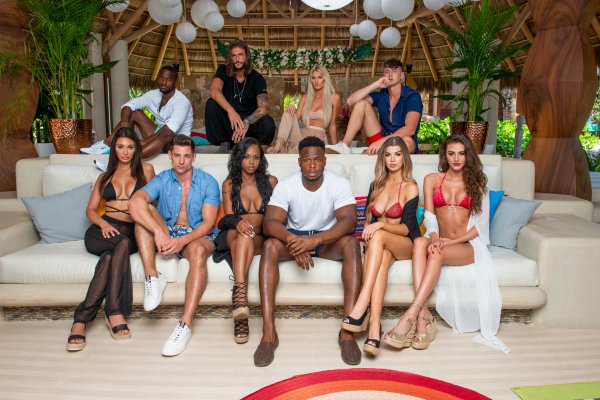 Netflix's Too Hot to Handle Is Oddly Relevant
Next Up: Editor's Pick