'A Court for King Cholera', 1852. A scene typical of the London slum. Cartoon from Punch. (London, Sept. 25, 1852).
Print Collector/Getty Images
By Deirdre Mask

On the first day of his epidemiology course at the London School of Hygiene & Tropical Medicine, Professor Paul Fine tells the story of John Snow. Snow was a doctor in Victorian London, and he was a man, people say, as pure as his name—a vegetarian, a teetotaler, and a bachelor. When Queen Victoria went into labor with her eighth child, Prince Leopold, John Snow was by her side, delivering anesthesia. But Snow led a double life. Far from Buckingham Palace, he trawled the streets and slums of Victorian London on an extracurricular mission, trying to figure out how cholera was spreading.

Cholera probably originated in India, before spreading through the Middle East and Russia, but it only arrived in England in 1831. At the time, there was no real understanding that germs, or microorganisms, spread disease. Instead, the “miasma theory”—the belief that disease came from vapors, or smells, arising from decay—dominated among medical experts. Smells, in other words, weren’t just signs of disease; they were the disease itself.

Snow, who had treated coal miners struck with the disease as a doctor’s apprentice in Newcastle, knew that cholera symptoms started in the stomach, not the nose. He hypothesized correctly that the disease was actually spread through drinking polluted water and eating with unclean hands.

Snow’s evidence was circumstantial, but he knew something else about his neighbors struck down by cholera, something he didn’t learn in medical school. As Steven Johnson points out in his engrossing book, The Ghost Map, Snow was not just a public health tourist, “goggling at all the despair and death, and then retreating back to the safety of Westminster or Kensington.” He lived only a few streets away from Broad Street, the center of the epidemic. And while Snow was now a doctor who attended the queen, he had grown up poor. So unlike many doctors from more privileged families, he didn’t blame disease on the bad habits of the lowest classes. “The poor were dying in disproportionate numbers not because they suffered from moral failings,” Johnson writes. “They were dying because they were being poisoned.”

I met Professor Fine—a Snow-flake, as uberfans are called—in London. In his office, just a few blocks from John Snow’s old home on Sackville Street, Fine told me how Snow had become the father of epidemiology, the study of disease and of the factors that contribute to disease. Epidemiologists are, like Snow, “disease detectives,” working out how, why, and where diseases are spreading, and using this information to improve public health.

At the time, the medical establishment rejected Snow’s arguments outright, but he persevered with his claim that cholera was spread through contaminated water. In Snow’s day, excrement was often stored in cesspits, little more than basements, or sometimes in storage tanks outside. By design, the liquid would leak out, and eventually night-soil men would come to collect the solid waste and sell it to farmers as fertilizer. Other cesspits were attached to sewers that went directly into the Thames, then London’s main source of drinking water, clogging it with raw sewage.

When cholera struck Soho in 1854, it spread quickly. The outbreak would ultimately kill more than six hundred people. Snow was already in the middle of another cholera investigation, examining the relationship between the source of water supply and the disease, but this case, just a few blocks from his home, would soon take over his life.

Luckily for Snow, he lived in a time when another, quiet new revolution had taken place in England. In 1837, the General Register Office started to record births and deaths. Parliament had created the system largely to facilitate the transfer of inherited wealth, but it had an unintentional, and far more meaningful purpose. Establishing a centralized place to register births and deaths would dramatically improve the public health of the nation. For the first time, anyone could know exactly how people died in London.

These fine-grained statistics were only possible because of street addresses. London had long been carefully mapped, but regular house numbers were still fairly new. In 1765, parliament had ordered that all houses be numbered, and the numbers painted conspicuously on the doors. So the General Register Office didn’t just know who had died; they knew where, as well. And it’s hard to emphasize enough just how important the “where” would become for public health. Addresses made pinpointing disease possible.

It was on a Tuesday that Snow went to the Register Office to collect the death certificates for the Golden Square outbreak. Each certificate had the date, cause of death, and crucially, the address of the victim. He realized quickly that almost all the deaths had taken place within a short distance from Broad Street.

While everyone else fled Soho—three-quarters of the residents had emptied out in six days—Snow sought out clues for where the dead had gotten their water. In homes of victims that were farther away from Broad Street, their families said they had gone out of their way to drink from the pump because it was believed to have cleaner water. Some unlucky children had died after taking a drink on their way to school. Other victims drank the water without knowing it: in neighborhood pubs, bartenders diluted spirits with water from the pump, and coffee shops sold pump water with a teaspoon of sherbet powder to make a fizzy drink.

But if cholera was in the pump water, why didn’t everyone who lived near the pump get cholera? Snow had an answer for that, too. On Poland Street a workhouse where women wove and knit stockings and the men carded wool was nearly surrounded by homes of cholera victims. But only five had succumbed to cholera. As Snow pointed out, “If the mortality in the workhouse had been equal to that in the streets immediately surrounding it on three sides, upwards of one hundred persons would have died.” On closer investigation, Snow learned the workhouse had its own pump.

On Thursday, just two days after he started his investigation, Snow visited a meeting of a special committee set up to investigate the epidemic, and asked for the pump handle to be removed. The residents weren’t happy; the pump’s reputation was that good. But they agreed to take the pump handle off anyway. The epidemic, which had already been waning, soon ceased.

After Professor Fine finished telling me John Snow’s story, he pulled out his copy of Snow’s book, On the Mode of Communication of Cholera. (The publication cost Snow over £200; it only sold 56 copies.) He gently unfolded a well-worn map, which had been repaired with clear tape, from the middle of the book. It was a map of the Broad Street epidemic. The map had been developed for other purposes, but Snow had adapted it for his own use, carefully marking each death with a thick black line. Most of the foreboding black lines were stacked like checkers around the pump. The map made a spectacularly compelling argument for the pump as the source of the epidemic.

As medical geographer Tom Koch has explained, Snow was hardly the first to use maps to study disease. In 1795, Valentine Seaman, who helped introduce smallpox vaccination to America, marked all cases of yellow fever in New York City on one map, then plotted the locations of waste sites, ultimately drawing the conclusion that the two were linked. (Unfortunately, the map did not reveal the disease’s connection with mosquitoes.) To pass the time, inmates at a mental asylum in Glasgow mapped the influenza epidemic of 1832. But cholera, which some have called the first truly global disease, seemed particularly to inspire disease mappers, eager to tackle the greatest public health issue of the time.

As an epidemiologist himself, Professor Fine has done his fair share of mapping disease. He spent years, for example, tracking leprosy in Africa. From a row of shiny red file cabinets, he pulled out enormous aerial photographs of Malawi and spread them on the table. Without street addresses or proper maps of the area, these were all he had to rely on to get around. I asked him whether he thought I was right about the link between addresses and public health. “It’s just so obvious,” he told me, carefully rolling up his maps. There was nothing original in my idea. Location and disease are inseparable.

Excerpted with permission from The Address Book: What Street Addresses Reveal About Identity, Race, Wealth, and Power by Deirdre Mask, available now from St. Martin’s Press. 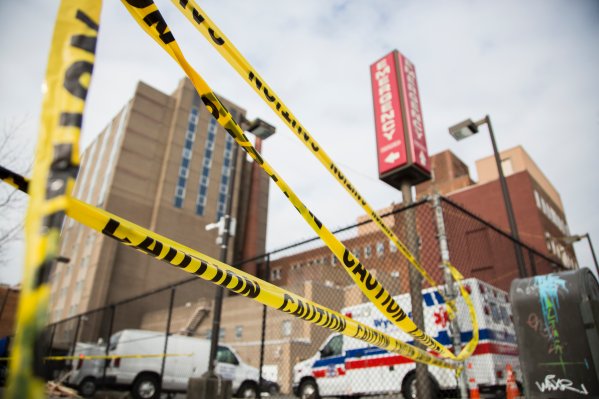 Where the U.S. Coronavirus Death Toll Fits Into History
Next Up: Editor's Pick