The Post-Coronavirus Unemployment Crisis Could Last for Years, Economists Say

A person in their car arrives to receive an unemployment application being given out by City of Hialeah employees in front of the John F. Kennedy Library on April 8, 2020 in Hialeah, Florida.
Joe Raedle — Getty Images
By Vince Golle and Sarina Yoo / Bloomberg

Economists expect the U.S. to suffer its largest-ever contraction this quarter and the unemployment rate to soar to a post-Depression record, followed by a recovery that will be moderate and drawn out.

Gross domestic product will plummet an annualized 25% from April through June after a smaller setback in the first quarter and the jobless rate will hit 12.6%, the highest since the 1940s, according to the median forecasts in Bloomberg’s monthly survey of 69 economists.

That’s dispiriting given a massive government fiscal relief effort and Federal Reserve actions aimed at shoring up the financial system, as health experts urge social distancing to combat the spread of the disease.

The downturn looks likely to be deemed as the first recession since 2007-2009 by U.S. business-cycle arbiter National Bureau of Economic Research. The second half of the year will see a resumption of growth, according to the survey, though economists say the deck is stacked against a snap-back. The Fed is expected to keep interest rates near zero until the first half of 2022.

“Even if the economy starts to re-open in mid-May, more than 20 million Americans will have lost their job with the economy likely having contracted around 13% peak-to-trough, more than three times deeper than the global financial crisis,” James Knightley, chief international economist at ING Financial Markets, wrote with his forecast submission.

“It will be a gradual re-opening of the economy, so a return to ‘business as usual’ is many months away. Throw in crippling financial losses and a legacy of defaults and it means we estimate U.S. economic output won’t return” to the late-2019 peak until mid-2022 at the earliest, Knightley said.

What’s more, years of robust job creation that pushed the jobless rate down to a half-century low of 3.5% will prove a distant memory. The unemployment rate is projected to fall gradually after peaking in the second quarter, yet it will only drop to 8.1% in the final three months of 2020. Even in 2022, unemployment is expected to average 5.4%.

The Bloomberg survey was conducted April 3 through Thursday, when a report showed another 6.6 million Americans applied for unemployment benefits, suggesting the jobless rate is already approaching 15%.

A separate survey by the National Association for Business Economics released Friday showed similar projections for first-half GDP and average unemployment over the full year. The panel of 45 forecasters — which overlaps with Bloomberg’s panel — also expects the 10-year Treasury note to yield 0.9% at the end of 2020, before slowly rising to 1.5% by December the following year. It stood at 0.72% on Thursday.

The Bloomberg survey also showed the U.S. economy will shrink 3.3% this year, more than double the 1.5% contraction for the entire world. U.S. growth will also lag behind in 2021 and 2022. 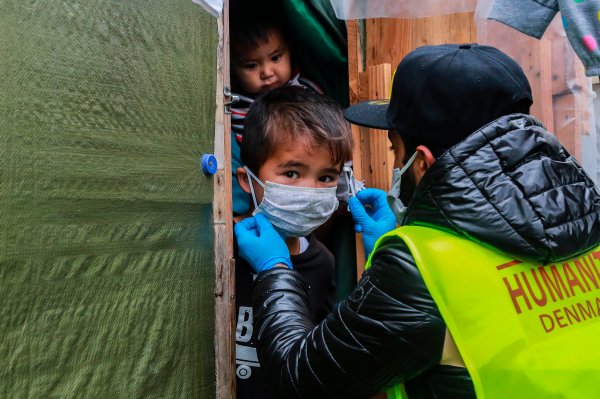 We Must Act to Help World's Neediest
Next Up: Editor's Pick