@tinycactus and the Escapist Art That Emerges From Dark Times

There’s an illusion that beauty can come only from light, though the reality is more often the opposite: It’s the dark times that demand we push out of ourselves, away from self-pity and anxiety, toward the creation of something that transcends our mere selves.

The influenza pandemic of 1918 killed some 50 million worldwide, and it took great artists away from us too, including painter Egon Schiele: His final, unfinished work is a haunting portrait of himself, his wife, Edith, and a child who was never born; Schiele and Edith, who was pregnant at the time, died in the autumn of 1918. Yet not even that pandemic could slow the stride of modernism, a forward-march of utopian boldness and energy led by artists like Picasso and Matisse, whose works opened a portal of fearless expression into the rest of the 20th century and beyond.

Art can be a diversion, an escape, valuable in itself. But it’s also a way of speaking to the world, often in a shout: Look at the exuberant, vibrating cartoons of Keith Haring, made at the height of the AIDS crisis, or the stark, haunted grace of the self-portraits made by Max Beckmann, one of Hitler’s “degenerate” artists. It can be a source of everyday wonder, like the vibrant, dynamic murals completed by Reginald Marsh in 1937, in the Alexander Hamilton U.S. Custom House, in New York City, a series of paintings showing New York as a bustling crossroads of world trade. This was just one of many projects funded by various initiatives of the Works Progress Administration, which provided work for artists and other creative minds during the Depression.

And to go back much further, let’s remember that the Renaissance came to being even as the Black Death, which began in 1347 and continued in periodic outbreaks until the late 17th century, decimated much of Europe. Michelangelo and Rembrandt painted in its shadow, and it took Titian’s life, though he was in his late 80s when he died. Thankfully, he used the long stretch of his days to capture joy and tragedy, earthly sorrow and transcendent radiance.

The New York City-based visual artist KangHee Kim, who posts as @tinycactus on Instagram, uses Photoshop to combine and transform the everyday images she photographs into dreamscapes that open out into a new, invigorating world. A flowering tree glimpsed in a mirror that our eye reads as a window; a creamy desert landscape stretching, in a translucent ghost image, across the walls of a city apartment: Kim’s work, a blend of the familiar and the surreal, is both haunting and reassuring.

Kim came with her family to the United States from South Korea when she was 14, but a legal mix-up prevented her from obtaining a green card. Now 28, she is protected under DACA, but she is unable to leave the United States if she wants to return. She says that her work—capturing mundane images and transforming them into visions beyond everyday experience—grew out of wanting to appreciate all that she has, rather than fixating on her restrictions.

“I felt like I was trapped,” she says, “but I wanted to feel more optimistic.” Now, she says, with people all over the world confined to their homes to mitigate the spread of COVID-19, she sees how her photographs might fit into a broader context—and many of her 350,000 Instagram followers have been reaching out as proof. “I feel like this whole situation is the extreme version of what I’ve been dealing with,” Kim says. “Before COVID-19, I was basically kept in the States. But now we’re all kept at home. I have been hearing from people that they can relate to my situation, and the images have been very therapeutic for them.”

When we make something we can believe in, even in our hours of doubt or sadness, others can believe in it too. Art outlives us—but it’s also the sustenance we need while we’re here. 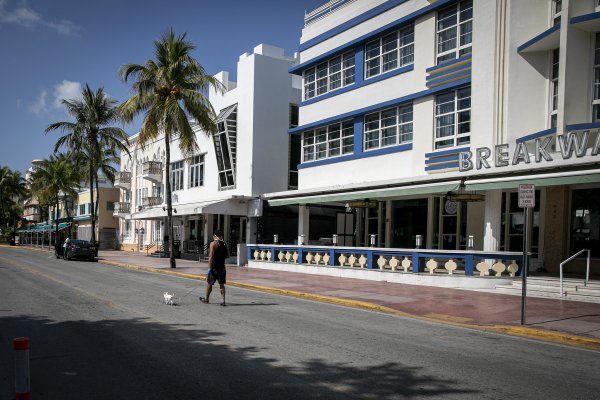 For Black Men, Homemade Masks May Be a Risk
Next Up: Editor's Pick