Volunteers from Sonko Rescue Team, an NGO privately funded by Nairobi Governor Mike Sonko, fumigate a street to curb the spread of COVID-19 during a joint operation with Nairobi county during a 7pm-5am curfew at a residential area in Nairobi, Kenya, on April 6, 2020.
Yasuyoshi Chiba—AFP via Getty Images
By Aryn Baker / Cape Town

Zororo Makamba wasn’t supposed to die of the novel coronavirus. Not just because of his age, which at 30 placed him well out of the at-risk category for COVID-19 complications, but because of who he was.

A well-known, pro-government media personality in Zimbabwe, and the son of a prominent business mogul, Makamba had the wealth and the connections that should have guaranteed him the best care possible. Instead, on March 23, Zimbabwe’s first confirmed case of the coronavirus died alone in a quarantined hospital, three days after his diagnosis. Hospital staff, lacking protective equipment, were afraid to come near him. They had no drugs and there was no ventilator available. Personal calls to the President for a transfer went unheeded, according to an account by his brother published in a local newspaper.

Makamba’s death shocked the nation, not just because he was a celebrity, but because it demonstrates just how unprepared the country is for a coronavirus outbreak. “If someone like Zororo, someone so monied and so connected, can’t get the right care, what kind of chance does an ordinary Zimbabwean like me have?” asks human rights activist Thandekile Moyo.

As Africans watch rich and powerful nations such as the United States fracture under the strain, they are starting to ask themselves the same question. Like the categories of people most at risk from coronavirus, many sub-Saharan countries share the same underlying conditions that make them even more vulnerable to collapse when an outbreak hits.

Heath care systems are already underfunded and poorly equipped. Conflict, climate change and natural disasters have driven some 18 million people across the continent into poorly serviced and crowded camps for refugees and the internally displaced where social distancing, or even hand washing, is impossible. Poverty turns lockdowns into a death sentence. And in countries where trust in government is poor, rumors and misinformation thrive in the place of leadership.

There are now more than 10,000 cases on the continent, with infections in every country but one (tiny, landlocked Lesotho). The rapid spread of the virus over recent days has World Health Organization officials and humanitarian groups worried that the continent is about to tip into massive escalation. When it does, the repercussions are likely to be far worse, both in terms of disease burden and economic impact, than anything seen elsewhere. “We don’t know if any country can withstand this,” says Emma Naylor-Ngugi, the East, Central and Southern African regional director for humanitarian aid organization CARE. “It’s very difficult not to envisage a really devastating long term humanitarian crisis across the region.”

If the virus hits the continent’s overcrowded cities, its underserved refugee camps, or populations already suffering from the multiple health burdens of malnutrition, HIV, malaria, tuberculosis and cholera it could easily overwhelm what little medical services exist. And if those cases skyrocket just as wealthy nations start to recover from their own outbreaks, it may be even harder to rouse the international assistance that the continent will so desperately need to survive.

Without a strong campaign of social distancing, public health practitioners estimate that a quarter, or more, of a population could be infected. In Africa, that could amount to 250 million cases, a terrifying prospect for Dr. Jerry Brown, who helped lead Liberia’s response to the West African Ebola outbreak of 2014 and is now helping prepare his country for a coronavirus outbreak. “Most African nations, if not all, do not have what they need to combat this pandemic,” he says.

There are no continent-wide statistics on the number of ventilators or intensive care units in Africa, but piecemeal reporting paints a grim portrait of available services. One doctor in Zimbabwe, where Makamba died for lack of a functioning respirator, estimates that there may be less than 20 in the country’s public hospitals. A senior hospital administrator in Khartoum told the South African Mail and Guardian newspaper that there were no more than 80 ventilators in the whole country. Nigeria, population 200 million, reportedly has fewer than 500 ventilators. Just three are available in the Central African Republic, a country of almost five million people, says David Manan, Country Director for the Norwegian Refugee Council. “When rich nations are in panic mode stating that thousands of ventilators will not be enough, it just brings to light how poorer nations like the Central African Republic don’t stand a chance in the fight against COVID-19.”

Brown says that to the best of his knowledge, Liberia doesn’t have any ventilators at all. Without the right kind of care for the worst cases, he says, “the five percent of the patients that go to the severe state of the disease will die.” For a patient in severe respiratory distress, “I wouldn’t be able to do anything beyond providing supportive care, and slowly you would die in my presence.”

In many countries, there may not even be a doctor there. Overall, sub-Saharan Africa has the lowest number of doctors per 10,000, a statistic commonly used to measure the quality of healthcare in a country. “I get scared when I read about Italy being overwhelmed despite having one doctor for every 243 people,” Oxfam Pan Africa Programme Director Peter Kamalingin B.L writes in an email. “In Zambia, the ratio is one doctor for every 10,000 people.”

The global shortage of protective gear has hit African nations as well. In Zimbabwe, doctors and nurses are issued with one pair of gloves, two masks and one paper apron per shift, according to Dr. Peter, a general surgeon in a public hospital in Harare who asked not to use full name for fear of government reprisals. It’s all the more terrifying, he says, because there are not enough tests to differentiate regular patients from those infected with the coronavirus.

“Officially we have eight cases,” he said in an interview last week. The official count is now up to 10. “But I know we have much more than that. We know many people have symptoms almost certain to be the coronavirus, and we have seen many deaths that could be attributed to the virus.” Without testing, and without safety gear, doctors and nurses will be the hardest hit when the outbreak comes, he says. “It will be like the rapture in the bible. One day you will find that all of the health care workers have been infected, and they will just disappear. Who will help the patients then?”

Not every statistic from Africa is a reason for alarm. It is also the world’s youngest continent, with a median age of 19.7 years old. While scientific knowledge about how the coronavirus affects people is still evolving, it seems that the impact on the young is minimal as long as they have no other underlying health issues.

There’s also more widespread understanding of how disease spreads here. Previous outbreaks, such as Ebola and cholera, have taught many public health sectors how to prepare for an epidemic. Many closed their borders and shut down schools at the first sign of the disease, rather than letting it reach a critical mass like some Western countries. At this point most countries on the continent are enforcing nationwide lockdowns, and some are already starting to see results.

South Africa’s Health Minister Zweli Mkhize noted that after a week of strict shelter-in-place orders, the daily increase in positive cases was slowing notably, a welcome respite that gives the country more time to obtain enough protective equipment and prepare enough isolation wards. “We were thinking we would have 4,000 or 5,000 cases by now,” he said on March 31. The current total of cases stands at 1686, the highest number in Africa.

But the lockdowns, however good for combatting the virus, bring economic misery that is especially acute here. Seventy per cent of Africa’s population depends on the informal economy for daily survival. With no houses to clean, no motorcycle taxis to drive and no markets to vend their wares, many face eviction and starvation. “If this continues for more than a month, it’s not going to be corona that kills us, it will be starvation,” says Moyo, the Zimbabwean activist.

And while lockdowns may work for single family households that have indoor plumbing and can afford to stock up on food, they could backfire in areas where communal living is the norm. Most families in Moyo’s neighborhood line up at a public well for their daily needs, she says. “Imagine, I have to queue for water. I have to queue for food. Now, I catch the virus and I come home to my crowded house and spread it to everyone who is confined in there with me. A lockdown in these kinds of areas might actually end up spreading the virus even more.” Not letting people out of their homes at all is tantamount to asking people to willingly starve, she says. “Unless you deliver food and water to every single household every single day, the only way you are going to keep people inside is at the point of a gun.”

African nations are doing what they can with what they have, says Liberia’s Dr. Brown, but unfortunately it is still not enough. It’s a hard ask, but even countries currently caught up with their own outbreaks need to spare a thought for those who can afford even less. As Zororo Makamba’s family discovered, wealth is meaningless when a disease recognizes no borders, and rages through all available resources. Stopping a pandemic that threatens millions of lives in Africa will require a global response, says Dr. Brown, not just for the benefit of the continent, but for the good of the world. “This pandemic has proven that no one nation is supreme. If we think that this is a disease of the west alone, we are getting it wrong. If we think it is a disease belonging to the Africans alone, we are getting it wrong. As long as we have the disease in one country, the rest of the world is not safe.” 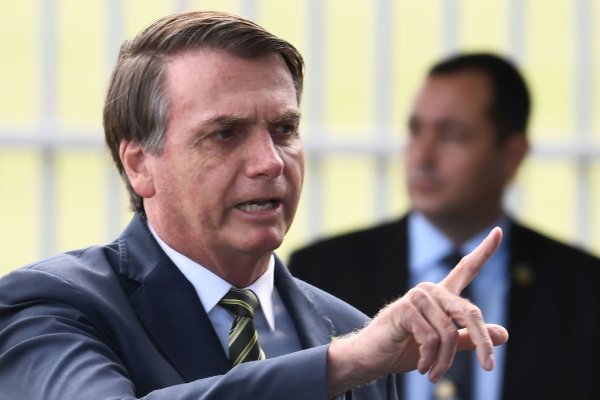 Brazil's Governors Oppose President on Virus
Next Up: Editor's Pick