Government officials in China, the world’s biggest consumer and producer of rice, called on citizens not to hoard the grain after a recent ban on new export sales by Vietnam sparked concerns over global supplies.

The country holds sufficient rice and wheat stockpiles for one year of consumption, while imports of the cereals are only about 2% of domestic usage, Wei Baigang, an agriculture ministry official, said at a conference on Saturday. “Market supplies are ample and there is no need to hoard,” said Wei.

China increased supplies at regular state sales last week to 3 million tons of wheat and 1.2 million tons of rice to stabilize market prices, while the government will continue to sell corn from stockpiles after sales of nearly 3 million tons in February, said Qin Yuyun, an official with the National Food and Strategic Reserves Administration.

The country, also the world’s top soybean importer, will closely monitor the logistical situation in Brazil, Argentina and the U.S., and coordinate with these suppliers to mitigate potential disruptions to shipments because of the coronavirus pandemic, Wei said.

Brazilian soybean exports to China remain normal with an increase in shipments in March, said Wei. The Asian country is also likely to increase soybean imports from the U.S. as part of the phase one trade deal, he said. Soybeans are crushed into edible oil for cooking and animal feed. 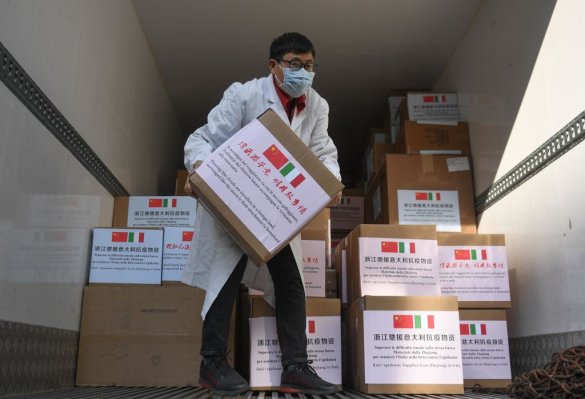 Why China’s ‘Mask Diplomacy’ Is Faltering
Next Up: Editor's Pick