Should you wear a mask during the coronavirus pandemic? The city of Laredo, Texas, has decided that yes, you do. And if you don’t wear one, they could fine you.

The city’s emergency mandate, which went into effect on April 2, states that every person over the age of five must wear “some form of covering over their nose and mouth” when using public transportation, taxis, ride shares, pumping gas or when inside a building open to the public. That face covering can include a homemade mask, scarf, bandana or handkerchief. The penalty for violating the order is a Class C misdemeanor, punishable by a fine up to $1,000.

The rule does not apply to people who are riding in “a personal vehicle,” who are alone in “a separate single space,” who are engaging in “permissible outside physical activity,” who are alone with their household members or who are eating food. It also doesn’t apply if when wearing a face covering poses a health, safety or security risk to the individual. Laredo’s mandate is reportedly the first in the U.S. to enforce the wearing of face coverings.

The Washington Post reports the announcement shocked many throughout the city, which sits on the U.S.’s border with Mexico. About a third of the population lives at or below the poverty line, per the Post, and masks had sold out of stores weeks earlier. Some on social media said the city should work to provide masks to people before fining them. The Laredo Morning Times reports that as of Saturday morning Eastern Time, Laredo had at least 85 confirmed cases of the virus and at least five people have died.

“I’d rather bury them in debt than bury them in a coffin,” city Councilman George Altgelt also said during the session.

Officials across the U.S. have begun urging people to use face coverings to stem the spread of COVID-19, the disease caused by novel coronavirus. On April 3, President Donald Trump announced that the CDC would change its guidelines to suggest that the general population wears non-medical masks when they leave their homes. Like in Laredo’s ordinance, these non-medical masks could include a bandana or a cut-up T-shirt. However, the CDC’s guidance, and similar guidances issued by cities like Los Angeles and New York City, are voluntary.

What’s caused this recent shift towards masks? Both Laredo’s ordinance and the President’s announcement cited new evidence that up to 25% of people infected with coronavirus might remain asymptomatic, which was not known when the pandemic began. There’s also evidence that people who do get symptoms can spread significant amounts of the virus up to two days before they start experiencing symptoms. This could have contributed to how quickly the virus has spread around the United States, Dr. Robert Redfield, the director of the Center of Disease Control and Prevention, told NPR on March 31.

Importantly, Laredo’s ordinance and the CDC’s guidance does not tell people to use medical masks, like N95s, which are crucial for health care workers and are already in short supply.

After the order was released, the City of Laredo took to social media to demonstrate how people could create their own masks.

Most Popular on TIME
1
How England's COVID-19 Reopening Went Terribly Wrong
2
Everything You Need to Know About Nurse Ratched Before Watching the New Netflix Show
3
'A Climate Emergency Unfolding Before Our Eyes.' Arctic Sea Ice Has Shrunk to Almost Historic Levels 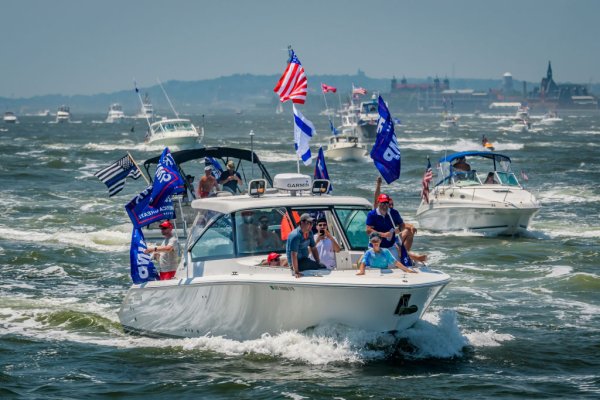