The Surprisingly Long History of the Ventilator, the Machine You Never Want to Need

At a demonstration at Samson Assuta Ashdod University Hospital in the southern Israeli city of Ashdod, on March 16, the director of the epidemics service, Dr. Karina Glick, checks a medical ventilator control panel at a ward
Jack Guez—AFP via Getty Images
By Alejandro de la Garza

With millions of people across the U.S. and the world battling COVID-19 infections, many of them struggling to breathe, ventilators have become a top priority for the health-care workers trying desperately to keep patients alive. And those machines, which help patients breathe or breathe for them, are in startlingly short supply.

For doctors, resorting to a ventilator is an extreme measure, used when a patient’s lungs cannot supply enough oxygen on their own. Ventilators can also give a patient’s body time to rest when breathing is difficult, and allow doctors to more easily remove lung secretions or deliver medications directly to the respiratory system.

Such treatments have rarely been more important to global public health—something that’s all the more striking given the surprisingly long history of the ventilator. While modern computer-controlled ventilators are relatively new, the basic principles on which they operate are more than a century old. The story of these machines, a history of incremental advances from dozens of doctors and technicians around the world, parallels broader historical developments in medicine and precision engineering.

While references to artificial ventilation can be found in passages from the Bible, some of the earliest attempts to use mechanical means to ventilate a patient—to breath for that person—can be traced back to the late 18th century, when the Royal Humane Society of England began supporting the use of bellows, akin to those used by blacksmiths at the time, as the best means of artificial respiration.

Such techniques could not be controlled effectively, but they demonstrated one of the main techniques of breathing for someone else: forcing air directly into the lungs. This system is known as positive-pressure ventilation. Another early attempt—an airtight box developed by a Scottish doctor in the 1830s, into which air could be rhythmically pumped to rescue a “drowned seaman”—demonstrated the other technique, negative-pressure ventilation. Rather than pushing air into the respiratory system, this system changes the air pressure of the environment outside the body. Because the pressure wants to equalize across the respiratory system and the atmosphere, those changes indirectly force air into and out of the lungs.

Many early versions of a ventilator relied on this negative-pressure principle. In the late 19th century, a Viennese doctor developed an infant resuscitator box, which was reportedly used successfully. Famed inventor Alexander Graham Bell even took a crack at the problem of artificial respiration, developing a “vacuum jacket” with some success.

One of the most widely used ventilation devices of the first part of the 20th century, the iron lung, also used negative-pressure techniques. Developed in the 1920s, the iron lung became a standby in ICU treatment for children suffering from polio, a viral disease that could cause life-threatening paralysis, including of the respiratory muscles. Before a vaccine nearly eradicated the disease in industrialized countries in the late 1950s, polio epidemics were a nearly annual terror, striking thousands of victims, predominantly children. In 1952 alone, more than 3,000 children died from the virus. The iron lung, which worked by changing the pressure inside an airtight container, expanding and contracting the chest and pulling air in and out of the lungs, became a essential treatment.

And yet, even as the iron lung became a symbol of what medicine could achieve, developments in positive pressure ventilation ensured that the device’s days were numbered as the most widely-used method of helping people breathe.

The Pulmotor, an early device for positive pressure ventilation, was introduced in 1907 by German businessman and inventor Johann Heinrich Dräger and his son Bernhard. The Pulmotor was a transportable device that disbursed oxygen through a face mask until a set pressure was reached in the lungs, at which point it switched to exhalation. Another early 20th century device called a “rhythmic inflation apparatus” pumped air into a sealed box around a patient’s head.

By the 1960s, the medical establishment had followed in those footsteps—thanks in part to the development of new positive-pressure breathing devices for pilots of late-WWII era jet planes, who needed oxygen for their flights at high altitudes. One such medical device, known as the Bird Mark 7 Respirator, was developed in the mid-1950s by Forrest Bird, a former U.S. Army pilot who had worked on aviation breathing apparatuses and anti-g-force suits.

Some consider the Mark 7 to be the first modern medical respirator, though in the decades since there have been many advances in ventilator design, including better control facilitated by computers. Perhaps equally important were new advances in medical knowledge, through which physicians have learned a great deal about improving survival for patients on ventilator support. For example, one such study in 2000 changed prevailing notions about how much air should be forced into patients’ lungs in each breath, a measurement known as tidal volume. The paper demonstrated significantly higher survival rates when physicians lowered the volume of air their machines were using.

“That has now, of course, become the standard of care,” says Dr. James Stoller, a Professor of Emphysema Research at the Cleveland Clinic Lerner College of Medicine. “The ideal care of patients who develop ARDS [Acute Respiratory Distress Syndrome] from coronavirus would be to use this low tidal volume approach.”

Invasive ventilation—which uses an endotracheal or tracheotomy tube to help people breathe, rather than an external device like a mask—is still a last resort for particularly sick patients, and they are usually sedated to help them tolerate the process. “You or I talking would not allow anybody to do this to you, I can tell you,” says Laurie Ann Ferguson, interim dean of the College of Nursing and Health at Loyola University New Orleans. The sedation is partially meant to suppress the gag reflex, she says, which would be overwhelming if a patient were conscious.

Still, decades of steady improvement in ventilator design and refined knowledge among physicians of how to use them effectively have gone a long way in improving outcomes when doctors have to resort to breathing machines. And the culmination of those hundreds of incremental advances has never been more essential for so many.

“I can tell you that the protocols that are being developed for coronavirus…completely depend upon the insights and wisdom that have come from the last 20 to 30 years of science and systematic study,” says Stoller. Those protocols, he says, “are in use right now, this very minute.” 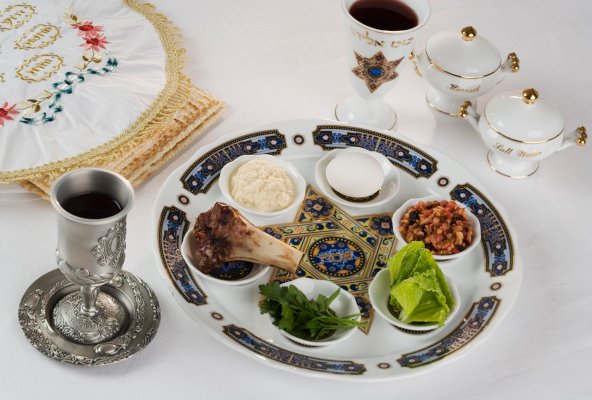 Passover Seder in Coronavirus Pandemic
Next Up: Editor's Pick