A $350 Billion Loan Program Is Supposed to Save Small Businesses. But Banks Are Balking

A "Closed" sign hangs in the window of a phone repair shop at The Plaza at Harmon Meadow in Secaucus, New Jersey, U.S., on April 2, 2020.
Angus Mordant—Bloomberg/Getty Images
By Philip Elliott

Thomas Wells is sympathetic to the hundreds of small businesses that have been knocking on the doors of his bank’s 59 branches this week. They all want to know how to apply for a loan through Washington’s massive new program that aims to stop Main Street from collapsing during the coronavirus pandemic. But on Friday, when the loan applications to tap the nearly $350 billion fund opened, the lenders at Wells’ First American Bank weren’t ready to cut the checks.

“What are the details?” Wells, CEO of the Chicago-based bank, told TIME the night before the program kicked off. As a commercial lender, he says he doesn’t have enough information from the government about how the program will work to risk approving loans for firms whose business has dried up since coronavirus hit the United States. “Nothing’s in final form,” he says.

Wells is not alone in his uncertainty. A week ago, Congress passed a $2.2 trillion economic stimulus package that includes an unprecedented loan program for small- and medium-sized businesses designed to reduce the nation’s snowballing unemployment numbers. The program allows firms with fewer than 500 employees to borrow ten weeks of business costs from commercial banks to keep their doors open. If the business survives — and maintains its staffing and pay levels — the government will step in and repay the principal on the loan to the bank.

“That begins right away and they start handing out checks,” President Donald Trump said on Thursday. “And a lot of people are going to have their businesses built back up quickly, I hope.”

Despite White House assurances that the program was ready to go, many lenders remained hesitant on Friday. Pittsburgh-based PNC, one of the ten biggest banks in America, admitted to its customers that they were still unclear about the terms of loans and therefore weren’t promising them. Other large lenders and smaller community banks also said they were unsure what liabilities they may face by lending businesses and non-profits money through the program.

The American economy desperately needs the kind of stability this effort could bring. Jobless claims soared to a record 6.6 million last week and there are few signs of hope coming. A Department of Labor report released Friday confirmed March would end a 113-month run of positive jobs numbers. By 2 p.m. on Friday, more than $1.8 billion had been loaned through the program, Treasury Secretary Steven Mnuchin tweeted, but that’s only a fraction of the money set aside to give businesses a boost.

The small-business program is a huge undertaking, run through the scrappy Small Business Administration (SBA) — a government shop whose total budget before the virus crashed the global economy barely tipped $1 billion. By handing it the short-term loan program, Congress saddled the unit with another $349 billion to manage, and gave it another $675 million to staff up to do the behemoth job. A SBA spokeswoman did not immediately respond to a query about the organization’s current staff levels.

Observers expect the program to get off to a bumpy start. “It’s going to be a learning-by-doing exercise,” says Paul Winfree, a former senior domestic policy and budget aide in the Trump White House who now leads economic policy at the conservative Heritage Foundation. Though the loans are administered by banks, the SBA will be responsible for oversight and governance of the money, he says. “I do know that they’ve never taken on a program at this scale. That is going to lead to massive logistical challenges that are going to be hard to overcome.”

Those institutional challenges were amplified by infighting over forms and interest rates within the Trump Administration, leaving many lenders unsure exactly what they needed to do to protect themselves as they prepared to administer billions of dollars to struggling businesses.

Mnuchin didn’t tweet the Treasury’s sample loan application form until 10:43 p.m. on Thursday, and final guidance for banks administering the loans didn’t come until hours before they opened their doors on Friday. When it did come, it still left a range of banks’ questions unanswered, including what level of responsibility the banks would shoulder if they approve fraudulent applications, how and when the government will repay the loans, and whether the government had enough money at the ready to do it. JP Morgan, the nation’s largest bank, told customers it wouldn’t participate on Thursday, and only came on board to say applications were open on Friday.

Some banks, like Wells’ First American, had prepared their own online application platform and boosted the staff on its lending desk to prepare for the crush of applicants. But Wells isn’t committing to loans until he sees the fine print about the consequences of quickly approving loans without time to sufficiently vet the applicants. “We can do that [vetting]. We just can’t do it quickly. And I think quickly is more important than perfectly,” Wells says. “There’s going to be fraud. That may be the price of getting this out quickly.”

There are also questions about whether lending at a 1 % interest rate, the rate set for the loan program by the Treasury Department, makes sense. Many banks say they are willing to make negligible profits from these loans, but as of Friday morning, they weren’t sure how long they’d have to carry them on their books. Typically, banks lend customers the money and then outside investors buy the debt from the banks. There were expectations that the Federal Reserve or the Small Business Administration was ready to buy these small-business loans and carry the debt. But without a detailed plan to execute this, banks are worried they will wind up in a cash crunch and unable to service other obligations like home-equity loans.

“There is no secondary market,” says Cynthia Blankenship, the vice chairman and corporate president of Bank of the West, based in Grapevine, Texas. She began her Friday looking at queries from 240 businesses seeking a total of $32 million in loans. By midday, another 300 businesses had been in touch.

Even though she can only process a fraction of these — she estimates she’ll be able to get about a half-dozen loans processed before sundown — she worries about her ability to keep cash moving out the door if she can’t shift the debt off of her books, and she doesn’t yet know how or when that will happen. She has called the Treasury Department twice this week looking for more information, she says. “This is an opportunity for us to help small business,” Blankenship says. “But it’s frustrating.”

On Thursday, as banks voiced their concerns, the White House sought to cast their fears as needless. Mnuchin said the loan program was clearly described and that banks should get to work. “If we run out of money on the small-business program, we’ll be back right away to Congress to get this increased,” Mnuchin told reporters on Thursday.

Still, many big and small banks alike were not rushing in. JP Morgan Chase & Co., the nation’s largest bank, told customers it wouldn’t participate in the program on Thursday, and only came on board to say applications were open on Friday. In addition to PNC and First American, the Independent Community Bankers of America, a trade group that represents smaller lenders, also issued a statement to its members acknowledging “this emergency program remains unclear at this late hour, and there are many outstanding questions and concerns.” In other words, they should exercise caution.

“There are still a lot of concerns and a lot of guidance that is not available yet for bankers to make these loans or borrowers to borrow the money,” says Paul Merski, the top lobbyist for the Independent Community Bankers of America. “We’ve got bankers around the country with thousands of pending applications they’ve collected already.”

But the risks of trouble down the road were just too heavy for many to open their vaults just yet. 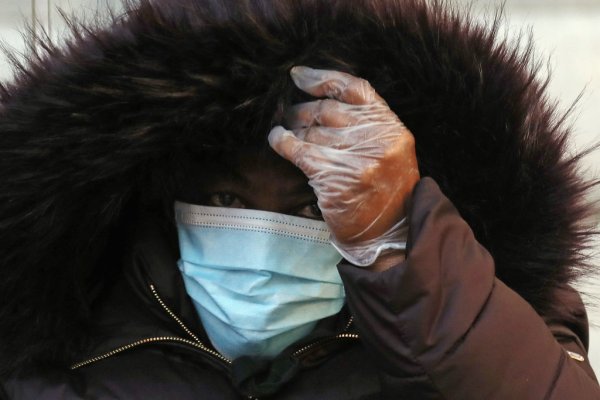 Should Healthy People Wear Masks to Prevent Coronavirus?
Next Up: Editor's Pick