Why Are There 360 Degrees in a Circle? Here's the History

Hand holding a rod, and a description of a theorem of Euclid, detail of the portrait of Fra Luca Pacioli (1445-1517) with a student, 1496, painting attributed to Jacopo de' Barbari
De Agostini via Getty Images
By Mark Ronan / History Today
History Today

In school we learn there are 360 degrees in a circle, but where did the 360 come from? When it is pointed out that the Babylonians counted to base-60, rather than base-10 as we do, people often ask if there is a connection. The short answer is no. The longer answer involves Babylonian astronomy.

Like other ancient peoples, the Mesopotamians observed the changing positions of the sun, moon and five visible planets (Mercury, Venus, Mars, Jupiter and Saturn) against the background of stars in the sky. Before 2000 BC a scribe in the southern city of Uruk, referring to a festival for the goddess Inanna, made it clear that, as Venus, she could be both morning and evening star, depending on whether she appeared before sunrise or after sunset. For them, Venus was a single object and they observed its changing position, along with the other planets and the moon. These positions all lie on the same great circle, called the ecliptic, defined by the apparent motion of the sun as seen from the earth during the course of a year. The reason the moon and planets are on the ecliptic is that, from the earth’s point of view, the plane of the solar system meets the heavenly dome in a great circle, so that is where they all appear.

In order to record their motions accurately two things are needed: a fixed calendar and a method of recording positions on the ecliptic. Calendars are tricky. The phases of the moon formed a rhythm in the life of all ancient cultures and it was natural for the Mesopotamians to base their calendar on months that started on the evening of the first crescent at sundown. With good visibility, a lunar month lasts 29 or 30 days and by about 500 BC the Babylonians had discovered a scheme for determining the start of each month. This used a 19-year cycle: 19 years is almost exactly 235 lunar months and the scheme works on seven long years (of 13 months) and 12 short years (of 12 months). This led to a fixed method of interleaving long and short years, still used today in the Jewish calendar and everything in the Christian year based on the date of Easter.

The records that helped them discover this cycle began in the mid-eighth century BC, when Babylonian astronomers wrote nightly observations in what we now call “astronomical diaries.” These continue until the end of cuneiform scholarship in the first century AD, yielding 800 years of astronomical records: a terrific achievement, far longer than anything in Europe to this day. It facilitated great advances, notably their discovery of the so-called Saros cycles for predicting eclipses. Each one is a cycle of 223 lunar months, perpetuated over a period of more than 1,000 years. There are Saros cycles operating today first seen in the eighth and ninth centuries. They remain the basis for eclipse prediction and appear in detail on the NASA website.

Astronomers in Babylon were using Saros cycles by the late seventh century BC. They only needed a lunar calendar to keep track of them, but for more sophisticated work on the moon and planets they needed a steady, non-lunar calendar. So they adopted an old idea, once used during the third millennium, for an administrative calendar: 12 months of 30 days in a year, making a 360-day cycle. This ‘ideal calendar’ reappears in the second millennium BC in the Babylonian Seven Tablets of Creation, which states that the god Marduk “set up three stars each for the 12 months.” These triplets of stars corresponded to 12 divisions of the ecliptic, one for each ideal month of 30 days, but it was an idealized calendar not used in everyday life.

The 12 equal divisions for a year also applied for the day from sundown to sundown, divided into 12 beru. For example, in the Epic of Gilgamesh — written during the second millennium BC — our hero races the sun in Book IX and we are told how he progresses at each beru, eventually coming out just ahead. As with the ideal month, a beru was split into 30 equal sections called uš, giving 360 uš in a 24-hour period. Each was therefore four minutes in modern terms. Fractions of an uš were also used: for example in the astronomical diaries we find an instance where the first appearance of the moon was visible for 3 ¾ quarters of an uš (15 minutes).

An accurate recording of time was important for these diaries and so were the positions of the moon and planets. During the fifth century BC a scheme was developed that could be broken down into fine detail: the ecliptic was divided into 12 equal sections, each split into 30 finer divisions (also called uš), yielding 360 uš in total. For finer accuracy an uš was broken down into 60 divisions. Each of the 12 sections they labelled by a constellation of stars and, when the Greeks took on Babylonian results, they preserved these constellations, but gave them Greek names — Gemini, Cancer and Leo — most of which had the same meanings as in Babylonia.

As Greek geometry developed, it created the concept of an angle as a magnitude — for example, adding the angles of a triangle yields the same as two right angles — but in Euclid’s Elements (c. 300 BC) there is no unit of measurement apart from the right angle. Then, in the second century BC, the Greek astronomer Hipparchos of Rhodes began applying geometry to Babylonian astronomy. He needed a method of measuring angles and naturally followed the Babylonian division of the ecliptic into 360 degrees, dividing the circle the same way. So, although angles come from the Greeks, the 360 degrees comes from Babylonian astronomy. 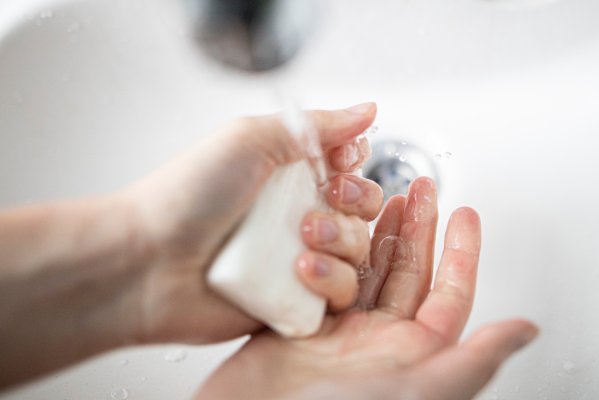