'It's Like Being a War Medic.' A Madrid Doctor Speaks Out About Grave Shortages in Protective Gear

Spain has the world’s highest reported rate of COVID-19 infection for doctors and nurses. 15,000 health workers are now sick or self-isolating, making up 14% of confirmed cases in the country, according to the health ministry. In Italy the figure is below 10%. No other country has reported a double-digit percentage of cases affecting doctors.

Spanish doctors and nurses say they lack protective equipment they need to treat patients safely in crowded hospitals. The government’s emergency health chief admitted last week that the shortage may have fuelled a high rate of infection among medical professionals.

In recent days, labor unions representing health workers have filed a series of lawsuits against the government across Spain’s regions and in the Supreme Court, in an attempt to force improvements to authorities to improve provisions.

Meanwhile, doctors have shared images of colleagues using disposable raincoats, garbage bags, and other improvised materials to protect themselves from the virus.

Sara, 42, is an emergency room doctor in Madrid—the epicenter of Spain’s outbreak, where one union says that over a fifth of COVID-19 cases are health workers. Sara asked TIME to only use her first name because she feared professional repercussions for speaking candidly. She believes poor coordination by authorities and a slowness to take drastic measures against the virus have put those on the front line at risk. Sara spoke to TIME over the phone from her home in Madrid on March 31.

It feels like we’re being played for fools. As the COVID-19 pandemic has advanced, and the number of cases has gone up, and the cases have gotten more severe, authorities are somehow telling us we need a lower level of protection.

A month ago, it was compulsory to wear impermeable overalls and a high quality mask even for lower risk tasks. Not anymore. If you’re not getting close to a patient and you’re not doing certain tasks, they say you just need a surgical mask and normal overalls. Now we reuse overalls again and again when normally we’d change every time we go on a break or see a new patient. It greatly increases the risk that you’ll get infected. I don’t think about it when I’m treating patients. But the falling standards make me feel unsafe. I worry about infecting my husband and my kids.

We’re doing what we can: colleagues are improvising ways to make masks and suits. A few days ago my hospital got a donation of protective trousers from a company. Volunteer groups have been giving us 3-D printed plastic sheets as protective screens for faces. We can disinfect them and use them several times before they break.

But still, many of us are getting sick. I have colleagues who are in the ICU, with serious cases of COVID-19. Right now I’m isolating myself at home because I have a slight fever. I’ve tested negative, but since I’ve been exposed I can’t go back to the hospital until my fever comes down.

Health workers at Sara's Madrid hospital use improvised masks made of plastic screens, donated by volunteers, to protect themselves from the virus that causes COVID-19.

A doctor’s job is to look after patients. The role of managers is to manage. I know it must be really difficult for authorities to ensure we have resources at the moment. But it’s their job. There should be a better way to do it. Other countries have been able to do it better. When you see images of health workers in China—though perhaps these are the ones they want us to see—they have full protective suits and they wear two separate layers. We only wear one layer, when we have it.

There has been a lack of coordination in Spain. Individuals are managing to get hold of resources. Celebrities have been donating them to hospitals. Why can’t the government get those things in the first place?

The fact those in charge have been slow to act has also led to more doctors getting sick. Because it’s an illness that expands gradually, governments have taken decisions gradually. And it’s too little too late. We should have been acting like a bomb had fallen.

When the first few cases of COVID-19 were confirmed in Spain, they said they were all imported from Italy and China. We were seeing an unusual number of respiratory infections and they weren’t letting us test them. They didn’t let us use a mask and a protective suit for the patients we suspected of having the virus, because Madrid wasn’t yet considered an area of community transmission. Those restrictions led to more doctors getting sick.

In Spain, we’ve never had to work like this before. Maybe in other countries where there aren’t many doctors or much equipment, doctors will be used to that. But in Spain we’re not used to working like that and we’re not trained to do it either. It’s really hard. 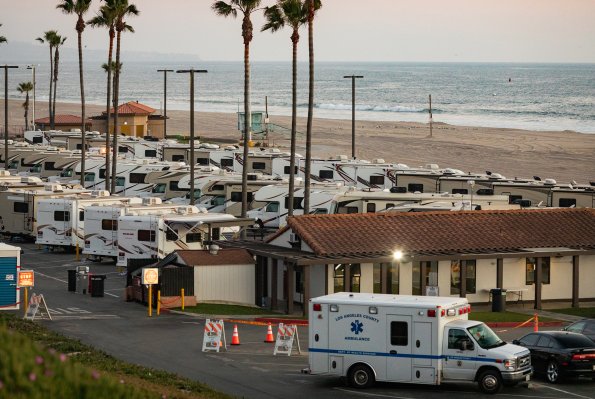