China Says It's Beating Coronavirus. But Can We Believe Its Numbers?

If you believe the Chinese authorities, the country’s battle against the novel coronavirus is all but won. But that claim is clouded by a fog of skewed data, political imperatives—and unreported cases and possibly deaths.

After several days of trumpeting just a handful of new COVID-19 cases, on Wednesday China once again switched up exactly what that means, and included asymptomatic infections of the coronavirus in its official statistics for the first time. The move follows criticism from health experts and the U.S. and other governments that it risked a resurgence of the deadly pandemic by downplaying the number of cases within its borders.

It was the eighth different definition of what constitutes a COVID-19 infection in China’s official statistics since the outbreak began in late December, with critics arguing that the lack of clarity has made it harder for other nations to adequately understand and prepare for the disease.

Speaking following a virtual meeting of the G7 March 25, U.S. Secretary of State Mike Pompeo slammed the “intentional disinformation campaign that China has been and continues to be engaged in” regarding COVID-19. Pompeo had earlier told CNBC that, “The information that we got at the front end of this thing wasn’t perfect and has led us now to a place where much of the challenge we face today has put us behind the curve.”

It’s not normal practice for nations to routinely exclude positive COVID-19 tests on basis of symptoms, Yanzhong Huang at the Council of Foreign Relations told Voice of America, not least because multiple studies indicate asymptomatic carriers are responsible for a significant proportion of infections.

And despite the rollback of containment measures across China as daily new COVID-19 cases drop to just double digits, nearly all imported from abroad, the change in criteria raises doubts about whether the virus is truly defeated in the country where it initially emerged.

Still, the government says it is taking action to ensure its numbers are accurate. A meeting on Monday of China’s top committee to combat COVID-19, chaired by Premier Li Keqiang, “reiterated the imperative for open and transpiration information disclosure, and warned against any cover-up or under-reporting,” according to an official release.

As ever for Beijing though, political considerations appear paramount. After China’s number of total infections was surpassed by the U.S. and other nations, the country was able to leverage its apparent success as a sign its harsh internal measures had bought others time, while assuaging anger at its initial bungling and cover-up of the outbreak that has so far claimed more than 42,000 lives around the globe. (Research by the University of Southampton suggests 95% of infections could have been avoided if China had acted three weeks earlier.)

Mainland China officially stands at 82,294 infections with 3,310 deaths. But it also had 1,441 asymptomatic COVID-19 patients under observation as of Monday, according to the National Health Commission. Hong Kong’s South China Morning Post newspaper reported March 22 that confidential documents indicate there were a total of 42,000 asymptomatic cases by the end of February that were excluded from official tallies.

Including those cases would mean China leapfrogs Italy and Spain back into second place overall for COVID-19 infections, though still behind the U.S., which had some 190,000 cases as of April 1.

But it’s just one of many concerns about official COVID-19 statistics in China. One study by six researchers from the University of Hong Kong found that 232,000 people in China may have been infected by Feb. 20, compared to the approximately 75,000 cases the country had officially reported on that date.

The study, which was published March 27 and has not been peer reviewed, examined what the case numbers would have looked like if the same case definition—a set of standard criteria for classifying whether a person has a particular disease — had been used throughout the epidemic.

According to the study, China’s National Health Commission issued seven versions of the case definition from January to early March as health experts learned more about the virus. (Making the most recent update to include asymptomatic cases the eighth.)

Ben Cowling, a professor of infectious disease epidemiology at the University of Hong Kong and one of the study’s authors, tells TIME that the case definition used in China was initially very restrictive, including only severely ill patients. It was gradually broadened to allow for the confirmation of milder cases, he says.

This underreporting hindered the world’s ability to understand to the severity of the outbreak in Wuhan, which has been under strict lockdown since Jan. 23 after the deadly novel coronavirus was traced to a seafood market in the city of 11 million.

“In Wuhan, in the early stages, testing was quite restricted to people with severe illness,” Cowling says. “That was one of the early limitations or missteps in the response was to focus on severe cases, not recognizing that there were a lot of other mild cases as well.”

TIME has spoken with many sickened Wuhan residents and relatives of presumed COVID-19 victims who were never included on official tallies during the outbreak’s peak. There are also countless reports of people collapsing in the street and bodies laid out outside apartment buildings. But only those who died after first being diagnosed with COVID-19 are included in official statistics.

One Wuhan resident who asked to remain anonymous for fear of official reprisals told TIME that her sick mother was refused admittance to a hospital during the Lunar New Year holiday in January and was just prescribed medicine and sent home without testing.

“I was really angry and scared at that moment,” she says. “I heard many reports of people who couldn’t check in hospitals and died at home; one even happened in my neighborhood. But the official report said there were only a few hundreds of death during that time. I don’t believe it, I think the death were 10 times more than reported.”

According to analysis by Radio Free Asia, the official death toll in Wuhan of 2,535 may have been underreported by almost a factor of 20. The news organization cites reports that seven funeral homes in the city were each handing out 500 funeral urns with the remains of suspected COVID-19 patients daily for 12 days from March 23 to the traditional tomb-sweeping festival of April 5, which would indicate up to 42,000 urns in total. Other estimates based on the capacity of funeral home furnaces puts the figure at 46,800. None of the funeral homes in Wuhan contacted by TIME were prepared to comment.

The lack of transparency is especially concerning as Hubei province is already loosening travel restrictions, with Wuhan’s lockdown due to end April 8, raising fears about a possible resurgence in infections.

Even as China announced with great fanfare March 19 that no new COVID-19 cases were reported inside the country for the first time since the outbreak began, at least one asymptomatic case was reported in Wuhan but excluded from statistics, according to Voice of America.

“There’s still ongoing concerns about the level of transparency around the data from China,” says Adam Kamradt-Scott, associate professor specializing in global health security at the University of Sydney. “Though the broader issues and what’s become increasingly apparent is that we’ve had a number of countries that have not put measures in place quickly enough.”

Reporting accurate numbers is hard even for countries historically invested in transparency, though. Many countries have struggled with adequate testing, which skews the official numbers of those infected. For one, the fatality rate in Spain and Italy stands much higher than average—at 9% and 12% respectively, compared to less than 2% in South Korea—not because they host a deadlier strain of the virus but because mild cases haven’t been tested, says Mario Esteban, a senior analyst specializing in E.U.-East Asia relations at the Elcano Royal Institute in Madrid.

Still, the worry, he says, is continued doubts over China’ numbers given its role as source of the pandemic even as it attempts to ramp up “mask diplomacy” by sending supplies to stricken countries overseas. “There’s a lot of concern about how this opacity inside China prevented greater international coordination and cooperation,” Esteban tells TIME. “Nobody believes China’s numbers.”

And not just outside China. On Tuesday, respected Beijing gynecologist Dr. Gong Xiaoming slammed as “hardly convincing” claims by China’s Ambassador to France that official statistics were accurate. “Many people [died] who were not hospitalized in time and so were not calculated in the total data,” Gong posted to his 4.7 million followers on China’s Twitter-like microblog Weibo. “The more honest you are, the more trust you gain.”

Write to Charlie Campbell at charlie.campbell@time.com and Amy Gunia at amy.gunia@time.com. 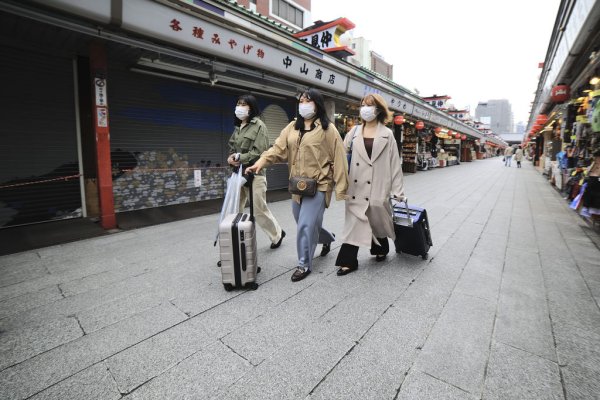 Japan Is Relying on Public Obedience as Coronavirus Cases Rise
Next Up: Editor's Pick