We Must Act Now to Protect America's Most Vulnerable from Coronavirus

Jail cells are seen in the Enhanced Supervision Housing Unit at the Rikers Island Correctional facility in New York.
Brendan McDermid—Reuters
Ideas
By Gavin Yamey
Yamey is a physician and professor of global health and public policy at Duke University, where he directs the Center for Policy Impact in Global Health.

By now, most of us are aware of what it’s going to take to break the cycles of transmission of COVID-19 from person to person. We need to stay at least six feet away from each other. We must not gather in crowds. We should diligently wash our hands. If we have any flu-like symptoms we should isolate ourselves. Yet for the over 2.3 million people held in federal and state prisons, juvenile correctional facilities, and local jails and the approximately 50,000 adults and children in immigrant detention centers, none of these protections are possible.

Prisoners and adults and children detained in immigration centers often face hellish living conditions—filthy toilets, poor ventilation, people packed into cells cheek-by-jowl, handcuffed people unable to cover their mouths when they cough, and much less access to medical care compared with access in community settings. Explosive outbreaks of coronavirus have already been seen in jails and prisons, akin to those seen on cruise ships and in nursing homes.

We must act now to prevent further outbreaks among these vulnerable populations. Since outbreaks in these settings will inevitably spread into other communities through the “churn” of infected correctional officers, visitors, judges, and health workers, outbreak prevention will help to protect us all.

To put it another way, “prison health is public health by definition.” That’s why on March 15, 2020, the World Health Organization (WHO) issued guidance on preparedness, prevention, and control of COVID-19 in prisons and places of detention. The guidance focuses on the need to establish an “up-to-date coordination system that brings together health and justice sectors, keeps prison staff well-informed, and guarantees that all human rights in the facilities are respected.” Countries worldwide, including the United Kingdom and France, have acted to prevent COVID-19 outbreaks in prisons.

Prisons must no longer be an afterthought in the U.S. coronavirus response. They must be a focus of control efforts. Urgent steps must be taken to prevent transmission within prisons and between prisons and the broader community, using the full range of known approaches—including social distancing, case detection, isolation of infected people, contact tracing, and keeping physical environments clean and disinfected.

When it comes to isolating infected people, prison health experts argue that “special consideration of the potentially serious mental health effects of isolation in these settings is essential.” Research from Australia has shown that it is entirely feasible to isolate an infected person in a prison setting while still allowing them social contact.

But in the midst of the worst pandemic since the 1918 flu pandemic, which killed 50 million people in an era before mass international transit, preventing “mass death events” in jails, prisons, and immigration detention centers will also require us to take the valve off these pressure cookers. We’re going to need to free some of the detained.

Countries around the world, from Iran to Australia, a handful of local jails across the U.S., the highest state court in New Jersey, and, most recently, the state of Iowa, are taking at least some positive steps to avert catastrophic coronavirus outbreaks by releasing people locked up in jails and prisons—typically low-level offenders and the elderly and sick. And a few days ago the Ninth Circuit Court of Appeals, on its own accord, released someone held in an immigration detention center on account of the escalating coronavirus crisis.

The Justice Collaborative, a non-profit criminal justice reform project, has organized an open letter from leading public health experts to the Trump Administration that lays out a common-sense approach to safely releasing some people held in federal prisons and immigration detention centers. As of right now, 45 public health experts (including me) have signed the letter.

Sentences should be commuted, we argue, for elderly people, who very rarely commit crimes after release. Older people who become infected with SARS-CoV-2, the virus that causes COVID-19, are at higher risk of severe illness and death. Similarly, given the higher mortality risks facing people with conditions such as diabetes, heart and lung diseases, and cancer, sentences for the medically vulnerable population should also be commuted.

The scientific evidence is still unclear on whether pregnant women have a higher risk of getting COVID-19 and whether they will become sicker than other people if they contract the disease. Nevertheless, the CDC notes that pregnant women who have been infected with viral respiratory illnesses like flu or with viruses from the same family as COVID-19 have had a more severe illness. There’s a very strong rationale for commuting the sentences of pregnant women.

We also call for sentences to be commuted for anyone with one year or less remaining on their sentence. This will limit overcrowding and free up prison beds that will be needed to care for sick people with COVID-19.

Finally, now is the time to release all adults and children detained in an immigration facility and to suspend new detentions of suspected non-citizens. We have all seen the shocking photos and videos of the miserable, cramped quarters that these people have been held in for days, weeks, or months. There have already been outbreaks of infectious diseases, including flu, chicken pox, and scabies. It is only a matter of time before we see COVID-19 outbreaks.

We believe this current health crisis compels this action, and that doing so will enhance, rather than diminish, public safety. To be clear, the Trump Administration can set conditions on any release (for example, “supervised release,” which is akin to federal probation). And nobody is talking about releasing anyone who poses an unreasonable public safety risk. Instead, we’re talking about being humane, protecting vulnerable people, and taking low-risk steps to help keep all of us alive.

But don’t just take it from me. Take it from Sheriff Ed Gonzalez, who oversees Harris County, Texas, which includes Houston. His officers are only arresting those who have committed serious crimes and he has worked to release inmates. “We can’t check our humanity at the door,” he says. “It has got to be important for us to remain very strong with public safety, but not lose our compassion along the way.” 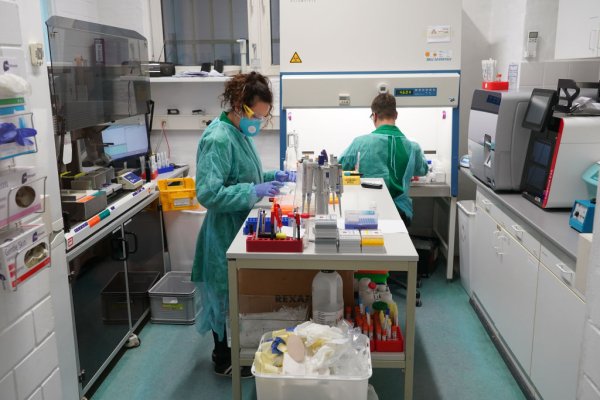 Why Is Germany's Coronavirus Death Rate So Low?
Next Up: Editor's Pick