'You Must Wash Properly.' Newspaper Ads From the 1918 Flu Pandemic Show Some Things Never Change

Courtesy of MyHeritage.com
By Suyin Haynes

As governments and societies across the world struggle with the ongoing COVID-19 pandemic, and scientists look to modelling to see how various approaches might impact the worldwide trajectory of the virus, some observers are drawing comparisons to another pandemic that happened over a century ago. The so-called Spanish flu of 1918, which is thought to have claimed the lives of 50 million people worldwide, has been used as a reference point, showing how COVID-19 compares to other pandemics through history.

Last week, a 105-year-old man thought to be Spain’s last living survivor of the 1918 pandemic warned the world to “be careful” amid the coronavirus outbreak. “I don’t want to see the same thing repeated. It claimed so many lives,” José Ameal Peña told Spanish newspaper El Mundo.

While the 1918 flu and COVID-19 are different diseases, and much has changed in the world of medicine since then, newspaper advertisements from 1918 show that, in some ways, the two moments are strikingly similar.

“We say that history is in cycles and that history repeats itself, and for this it’s exactly the same in several aspects,” says Elisabeth Zetland, a researcher at MyHeritage, which has a database of 11.9 billion searchable historical records, including newspapers, largely specializing in family history. (The newspapers are searchable here.) In early March, as the coronavirus started spreading rapidly, Zetland searched for “Spanish flu” in MyHeritage’s historical newspaper collection. “What struck me were the similarities,” she says, “and I was not expecting them to be so strong compared to now.”

While medicine has advanced and access to information has increased significantly since 1918, there are some parallels in the messaging and advice given to the public. Although the healthcare system in 1918 was more fragmented and disparate across the U.S. than it is now, authorities then understood enough to know that people should stay away from each other due to the highly contagious nature of the flu. A lack of vaccine at that time meant that public health efforts worldwide were focused on personal hygiene, quarantines and limiting public gatherings.

The emphasis on washing hands frequently, avoiding crowds and wearing masks was recurrent in newspaper records of the time, as was disdain for people flouting the rules. One advertisement for the Red Cross from the Berkeley, Calif., Daily Gazette in October 1918, backed by county authorities and the board of health, said that gauze masks were “99% proof against influenza,” and that anyone not wearing a mask was a “dangerous slacker.”

In 2020, the recommendations are different in the U.S.—health experts at the Centers for Disease Control and Prevention advised healthy people against wearing face masks, which are now in short supply. But in other countries, particularly in Asia, wearing masks is a cultural norm and is recommended by health professionals to help slow the spread of disease.

As is the case today, there was a shortage of masks in 1918 and, according to Zetland, several newspaper records advised people on how to make their own masks. Today, while it’s widely acknowledged that homemade masks do not prevent the spread of disease the way N95 respirator masks do, many people are likewise sewing DIY versions.

Commercial advertisers quickly cottoned on, marketing their products to educate the public about the growing pandemic. Hygiene conditions in the battlefields of World War I during the final year of the war were appalling, and the war had drained much of the nation’s medical resources. The outbreak was first identified in the U.S. in military personnel in Spring 1918, and outbreaks within states were often traceable back to Army military bases and hospitals, such as in Minneapolis.

Cramped living conditions in urban centers across the U.S. in the early 20th century created ideal situations for transmission of the virus. To educate the public about hygiene, as well as market their product, Lifebuoy Soap purchased a series of advertisements in newspapers across the U.S. in November 1918. The ads acted as a public-health notice explaining to people exactly why washing their hands was important, and how their soap would leave skin “antiseptically clean.” Today, the importance of hand-washing is once again a refrain.

In some cases, businesses took advantage of public fears and desperation about the crisis, even when their products didn’t seem relevant. Some advertisers touted their products as recommended by doctors or backed by science, even when the products, such as Horlicks Malted Milk, had little or nothing to do with medicine. One ad, from a massage parlor in San Jose, Calif., outright promised that their treatments were “guarantee to cure Spanish Influenza.”

“People used remedies then that it’s funny to read about now,” says Zetland, who notes that one particular remedy kept recurring while she was researching. “You were meant to cook 12 onions, get the juice and drink it the day afterwards, and that would protect you from the flu.” Today, misinformation about the coronavirus and the best ways to prevent infections — including, for example, debunked claims that blasting the sinuses with hot air can kill the virus — have spread rapidly on social media.

Other products carried a “no influenza guarantee,” as an advertisement for a bicycle in the Calgary Herald shows, with its promise that the bikes would arrive germ-free. The same newspaper carried an ad from an insurance company offering a “Special Sickness Policy” covering Spanish influenza. More than 100 years later, some businesses have used the same messaging. In early March, several AirBnB listings in the U.S. promised “coronavirus-free” getaways for travelers seeking to “escape” the virus.

Historians have credited the 1918 flu with revolutionizing public healthcare systems across the world, but it seems perhaps not as much has changed in the world of advertising.

On social media, journalists have documented PR pitches received in recent weeks that seem to have a coronavirus-related spin, or be tied to news of the pandemic, even when the products themselves don’t appear to be directly relevant to the health crisis. 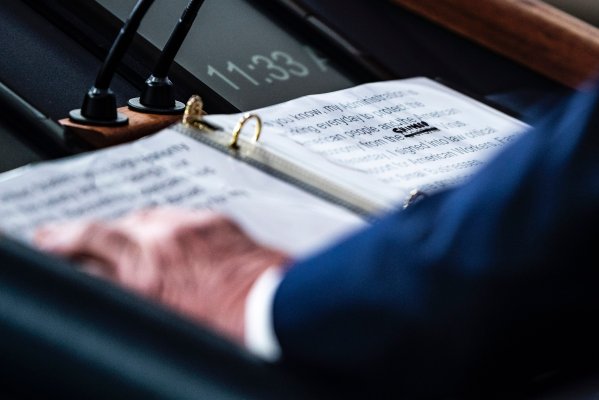 Trump's 'Chinese' Virus Is Part of a Long History
Next Up: Editor's Pick