Amazon’s Making the Cut Is the Second New Project Runway Imitator This Year. What's Going On?

Reality TV has become a major front in the streaming wars, and Amazon is joining the fight with Making the Cut. Hosted by Heidi Klum and Tim Gunn, the 10-part competition, which will debut two new episodes weekly, pits a dozen fashion designers against one another in a series of creative challenges. While Klum anchors the sassy panel of judges, the avuncular Gunn, a paragon of good taste in his perfectly tailored suits, mentors the contestants. “This adventure is going to be like no other,” Heidi tells the cast in their first meeting. “This is an unprecedented opportunity,” Tim proclaims.

Neither statement is entirely true—as evidenced by, well, reality. Gunn, on top of a long career in the fashion department at New York City’s Parsons School of Design that ended in 2007, has been a household name for 16 television seasons. He and Klum presided over Bravo’s Project Runway, which set the template for a whole subgenre of creative competition shows, from Top Chef to RuPaul’s Drag Race; spawned many spin-offs; and inspired adaptations on six continents. When the duo defected to Amazon in 2018, model Karlie Kloss and Runway winner turned A-list designer Christian Siriano stepped in to take their place. Then, this past January, Netflix launched a remarkably similar contest called Next in Fashion, hosted by model-designer Alexa Chung and Queer Eye fashion guru Tan France. More than 15 years after its 2004 premiere, Runway is still multiplying.

It makes sense. As they compete for potential cord cutters who are loyal to particular long-running cable reality franchises—among which Runway has proven to be one of the most enduring—streaming services need to provide those viewers with reasonable facsimiles of their faves. The phenomenon that is Drag Race, a breakout hit from queer-centric channel Logo that moved to the more visible VH1 after proving its wide appeal, explains why Netflix is saturated with drag content and three of RuPaul’s girls have an unscripted series, We’re Here, in the works at HBO. Runway, with its simple formula of talented contestants, celebrity hosts and sharp-tongued judges, seems easy to replicate.

Making the Cut and Next in Fashion aren’t exact clones, but their differences from Runway do seem reverse-engineered to avoid too much overlap. While Next pairs up designers for a series of team challenges (confusingly, some have a previous relationship with their collaborator and some don’t), Making feels like a big-budget flex from a company with some of the world’s deepest pockets. The debut season flies contestants from New York to Paris before the first challenge even begins; Tokyo is next on the itinerary. (What a luxury jetting freely between neighborhoods, let alone hemispheres, seems in the time of coronavirus.) Its top prize of $1 million dwarfs the $250,000 Runway gives winners. Unseen seamstresses stitch together garments overnight because, as Gunn often repeats, this isn’t a sewing competition. Judges include style stars Naomi Campbell and Nicole Richie. The show tries to make the most of Tim and Heidi, who couldn’t have come cheap, with silly but inoffensive skits where they visit local tourist destinations.

Amazon isn’t just throwing around cash because it can, of course. The megaretailer will sell an “accessible” look from each episode—creating a new revenue stream for Prime—in yet another reminder that Runway’s watchable imitators exist for monetary reasons more than creative ones. For shows that thrive on their participants’ ingenuity, the irony is striking. 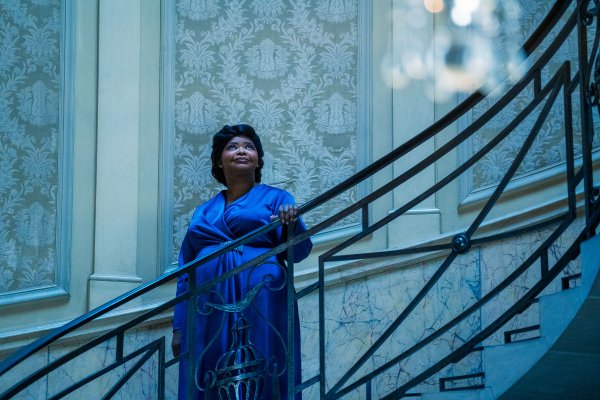 Netflix's Self Made Makes a Mess Out of Madam C.J. Walker's Extraordinary Life
Next Up: Editor's Pick