What Astronauts Can Teach Us About Isolation and Quarantine

President Nixon greeted Apollo 11 astronauts Neil Armstrong, Mike Collins and Buzz Aldrin, who went immediately into medical quarantine after their return from the moon on July 24, 1969
NASA
By Jeffrey Kluger

It’s not hard to practice social distancing at Russia’s Baikonur Cosmodrome. Once you get away from the hangars and launch pad and the railroad line that connects them, the place is practically bucolic—a large, leafy compound of low-slung buildings, less a space complex than a sort of Camp David in Kazakhstan. That’s a very good thing for a crew preparing to take off for the International Space Station (ISS) aboard a Soyuz spacecraft, since they spend their last two weeks before launch in medical quarantine, living together, along with their back-up crew, in bungalow-like quarters. Baikonur staffers who come into contact with them are gowned, gloved and masked like surgeons, all in an effort to make sure no illnesses are carried to the ISS.

One thing astronauts who are not actually in space at the moment have on the rest of us is that, given their experience with quarantine and isolation, they’re far less likely than we are to go stir-crazy while stuck at home during the corona crisis. As a result, they have a lot to teach us. One thing we share with them is that staying occupied always helps.

“The amount of time Shuttle astronauts were isolated [missions averaged two weeks in length] was less than what our current shelter in place is going to be and the most important difference is we were ragged busy!” wrote retired astronaut Marsha Ivins, a veteran of five shuttle missions, in an email to TIME. “We were working 18-hour days before, during and after the mission.”

That kind of schedule-filling helps during the long-term isolation of three-, six-, and 12-month rotations aboard the space station too.

“The key to any successful expedition is to keep the crew busy,” says former NASA astronaut and space station veteran Terry Virts. “A busy crew is a happy crew—and a bored crew is a disaster. This is a great time for people to do the things they’ve been delaying for years—organize the house, start writing that novel, organize your family photos and scan the old photo albums, come up with a financial plan once the economy turns somewhat normal again—and it will.”

Then too there is the matter of the people you live with in such close quarters—whether on the ground or aboard the station. While sheltering in place might seem especially challenging for people living alone—an arrangement that describes 28% of American households, according to the U.S. Census Bureau—there is something wearying about coming face to face with the same faces every day.

“I remember many of the long-duration crews mentioning that seeing a new crew after two or three months was great because it was suddenly people who weren’t them,” says Ivins. “On my relatively short flights I was also happy in a few mission cases to be done with people who were us.”

The lesson for people isolating now is not so much to have some new faces over, since that defeats the whole point of social distancing, but to have time apart from the ones in your household. That might mean taking a walk or even deliberately splitting up—someone going into the backyard while someone heads for the front yard and someone else gets the den.

None of that works as well as it could, of course, if there are contrarians in the brood, and every family has them—people inclined toward short tempers or crankiness under stress. While it is the responsibility of those more-snappish folks to keep their worst tendencies in harness, it helps if the rest of the family strives for greater tolerance.

Perhaps the most grueling of all space-isolation experiments was the 1965 Gemini 7 mission. It lasted just two weeks, but they were two miserable weeks. Astronauts Frank Borman and Jim Lovell were squeezed shoulder-to-shoulder in airline-coach-sized seats, with a wall on both sides (no aisle seats here) and the ceiling barely three inches above their heads. Borman and Lovell ate, slept and took care of other bodily business in those conditions for a full fortnight. Both astronauts came to describe the mission as “two weeks in a men’s room.”

They survived it all because NASA knew its astronauts well and was very adept at pairing up personalities. Borman was and remains an agreeable sort, but he was also an exceedingly serious, by-the-book astronaut. Lovell was and remains looser, easily among the most affable astronauts in the old corps. “If you can’t get along with Lovell,” Borman told me in 2015 when I was writing a book on Apollo 8, another mission they flew together, “you can’t get along with anyone.” The combination of the strict Borman and the looser Lovell made for both a tight ship and a minimum of friction.

For all the deep experience Ivins, Virts, Lovell and Borman share, however, there might be no one better able to help terrestrial humans through the challenges of isolation than the veterans of the first three successful lunar landings. They not only went into medical quarantine before each mission, then flew the mission all alone together, they also spent three more weeks in lockdown after they came home, just in case they were carrying any lunar pathogens.

In a delightful story just published in Ars Technica, Apollo 11’s Buzz Aldrin shared the secret of how he’s passing the time while trying to stay safe from coronavirus: “Lying on my ass and locking the door,” he said simply.

Intended or not, Buzz’s message is a little like Virts’s words on the economy: Relax. This will get better; these times will pass. Viruses and bacteria have had their way with humanity since we emerged on the savannah, and we have had our way right back at them—first via our immune systems, later by acquired knowledge of social distancing and good hygiene, and later still by advanced science, vaccinating and medicating the pathogens into submission.

COVID-19 is, in some ways, Apollo 13: It blindsided us, it’s challenging us, and for now it feels like it’s defeating us. But we’re smarter and nimbler than an insensible virus and there should be no doubt who will win in the end. See y’all at splashdown.

A version of this article was originally published in TIME’s Space newsletter. Click here to sign up to receive these stories early. 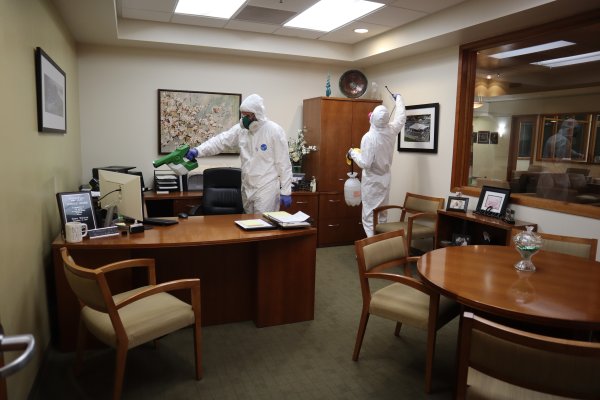