As the coronavirus continues to spread across the U.S., stores like Best Market face high demand for paper goods, leading to empty shelves on March 17 in Merrick, N.Y.
Al Bello—Getty Images
Ideas
By Eva Holland
Eva Holland is the author of Nerve: Adventures in the Science of Fear.

The sensations were familiar: my heart rate accelerating, my chest tightening, my focus narrowing. These were feelings I’d had many times before in my life—most often when exposed to heights, climbing a ladder or hiking along a steep trail. I’d felt them during the long, stretched-out moments of a serious car accident, rolling off the highway and into a ditch in a mountain hailstorm, and I’d felt them again for months afterwards whenever I drove on icy pavement or around a sharp curve. I’d felt them in late-night moments of uncertainty, walking home along a dark street with a car idling too close, or waking up alone in my apartment, wondering if that strange sound I’d heard was a dream or reality.

This time, though, I wasn’t doing any of those things. I was standing in the canned-goods aisle of the grocery store, staring at the mostly-empty shelves. Even in the Yukon, a region of northern Canada that had yet to record its first known case of COVID-19, there was only one carton of chicken stock left. I tried to tell myself that the situation was funny, tried to avoid eye contact with the other shoppers as I grabbed that one carton. I could feel our collective unease.

So often, we describe fear in terms of disease—we talk about fear spreading like a virus, racing through a crowd; we talk about being infected by fear. And it might be a cliché, but it turns out studies suggest it’s true: fear really is contagious.

We’ve known for a while now that animals can “smell” fear on each other—although in the popular imagination, we tend to think of predators sniffing out the fear of their prey. That’s a misunderstanding of the phenomenon. What really happens is that prey animals unknowingly emit silent, invisible “alarm pheromones.” These are airborne chemical cues intended to warn other members of their species about nearby dangers.

Until fairly recently, it wasn’t clear if this was an ability that was limited to the wild world, an instinct that humans had lost in our march away from nature. There were studies, based on observed behaviors, that suggested human beings might be capable of emitting and sensing alarm pheromones. But it was only a little over a decade ago that a team of scientists provided clear physiological evidence of the phenomenon.

“We kind of set out to do the first rigorous test of whether human alarm pheromones existed,” Lilianne Mujica-Parodi, the lead researcher on the 2009 study, told me. Her team used an unorthodox experimental technique: they sent people skydiving. Mujica-Parodi and her colleagues collected sweat samples from 144 people who were about to experience a first-time tandem jump. Then they used those same 144 individuals as their own controls, collecting their sweat after they’d run on a treadmill.

Next, they presented both sets of sweat samples to a new set of test subjects, using fMRI brain scans to view how they reacted to the pheromones in real time. The “fear sweat” triggered activity in the subjects’ amygdalas—the small brain structure that is known to be critical in deploying and managing our fear response. The exercise sweat did not.

In a second phase of the experiment, having already demonstrated amygdala reactivity in response to the fear sweat, the team explored the behavioral component of that amygdala response. They exposed the test subjects to either the fear sweat or the exercise sweat while showing them a range of images of human faces, conveying a spectrum of expressions ranging from blank to angry. Asked to rate each image as either neutral or threatening when inhaling the exercise threat, the subjects rated only the angry faces as potential threats. But when they inhaled the fear sweat, they were significantly more likely to rate the whole range as threatening—suggesting that the fear sweat triggered heightened vigilance in the subjects. We really can “smell” fear on one another, her research suggests. And that chemical alert system may prepare our brains to react to incoming threats.

That might help explain why we sometimes find ourselves walking into a room and suddenly feeling on our guard—that sense of an inexplicable yet clearly threatening vibe or mood. It might also help explain that sense of palpable tension in the air these days when someone coughs nearby or when we realize that the toilet paper aisle is ominously empty.

I’ve thought a lot about Mujica-Parodi’s research in the last few days as I’ve shopped for necessary supplies, canceled plans and scrolled anxiously through endless news stories and social media posts about the spread of the virus. This might sound strange, but thinking of it comforts me. Our alarm pheromones are a vital reminder: Fear is built into us for a reason, and it’s O.K. to feel it. It’s a survival mechanism, and it is designed not only to help us survive as individuals, but to help our communities survive, too.

It’s easy to view the idea of contagious fear, of infectious fear, as a negative. We spend so much time, as a culture, talking about suppressing, ignoring, defeating, overcoming and curing our fears. But our fear is a finely calibrated alarm system, more like a smoke detector than a disease. At this fraught moment, it makes sense to listen to its siren: not to panic, but to heed official medical guidance and prepare. 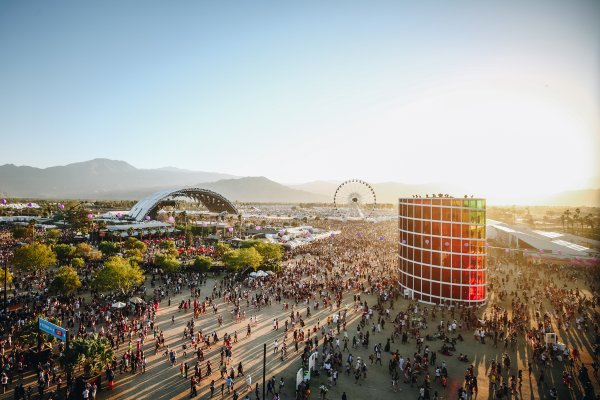 Coachella's Postponement Wreaks Havoc on the Local Economy
Next Up: Editor's Pick