A senior Australian government minister who met White House officials including Ivanka Trump in Washington last week has been diagnosed with the coronavirus.

Minister for Home Affairs, Peter Dutton, released a statement late Friday saying he’d been diagnosed with COVID-19 and admitted to hospital. The Cabinet member visited the White House on March 5 and was pictured with Ivanka Trump, Attorney General William Barr and other ministers representing the Five Eyes security pact.

It’s unknown whether Dutton’s proximity to the U.S. president’s daughter will mean Donald Trump will test for the coronavirus — he’s yet to do so even as his incoming chief of staff and at least four other GOP lawmakers put themselves in quarantine after coming into contact with an infected person at a political event.

Prime Minister Scott Morrison said in a statement the country’s deputy chief medical officer had advised it was not necessary for the prime minister or other cabinet members to be quarantined as they had not been in contact with Dutton in the 24 hours before he became symptomatic.

Dutton’s announcement came just hours after Morrison told reporters Australia was advising against non-essential, organized gatherings of 500 people or more from Monday, in an escalation of the nation’s response to the coronavirus outbreak.

He urged Australians to reconsider their need to travel overseas.

“It is precautionary,” Morrison told reporters, adding he was acting on the advice of Australia’s Chief Medical Officer Brendan Murphy. “It is getting ahead of this to ensure that we can minimize the impact on your health.”

Infectious-disease experts had been urging Australia to follow the example of places like Taiwan and Singapore that have limited new cases through blanket-bans of sporting events, concerts and other mass gatherings. Australia’s official tally of confirmed cases stood at 156 on Friday, up 24% from the previous day, with three deaths.

“This is a scalable response, taking an abundance of caution,” Morrison said, adding he still planned to attend a rugby league game on Saturday as it might be his last chance for a while. “What we’re seeking to do is lower the level of overall risk while at the same time minimizing a broader level of disruption.”

The Australian dollar remained about 1% higher, buying 63 U.S. cents at 5 p.m. in Sydney. After opening about 8% lower this morning, equities rallied throughout the day before a late spike saw the benchmark S&P/ASX 200 Index close up 4.4% in the biggest daily swing on record.

The announcement is the latest in a string of measures taken globally to address the spread of the virus. Italy has shut down most of the country, except for essential services like grocery stores and pharmacies. New York Governor Andrew Cuomo has said he is banning gatherings of more than 500 people, a move that will impact Broadway. The New York rules don’t apply to schools, hospitals, nursing homes and mass transit.

France has ordered the closing of nurseries, schools and universities from the beginning of next week to slow the spread of the coronavirus, while the Netherlands plans to cancel all events, including sports games and trade shows, attended by more than 100 people for the rest of the month.

Morrison’s announcement comes a day after Australia unveiled a A$17.6 billion ($11.4 billion) fiscal stimulus package geared toward the second quarter as it tries to buttress the economy from the outbreak that threatens to end an almost 30-year recession-free run.

Earlier Friday, Formula One canceled this year’s season-opening Australian Grand Prix event in Melbourne, as hundreds of fans queued for entry to the first practice session.

With the measure not coming into effect until Monday, fans should still be able to attend the National Rugby League games scheduled for later Friday and soccer’s A-League games this weekend.

The Australian Football League, the nation’s most popular spectator sport, opens its season March 19 at the 100,000-seat MCG.

Sporting events across the world have been delayed and canceled, or teams required to play in empty stadiums, in response to the risks posed by the virus.

In the U.S., the National Basketball Association suspended its season, as did the National Hockey League, while the NCAA called off March Madness, the college-basketball tournament. England’s Premier League will hold an emergency meeting Friday on soccer fixtures after Arsenal manager Mikel Arteta tested positive to the virus.

Should Australia’s cases grow at the 24% rate they increased between Thursday and Friday, the tally will stand at around 300 by Monday.

University of New South Wales biosecurity professor Raina MacIntyre said Morrison appeared to be getting Australians mentally prepared for an era without being able to attend large-scale sport and cultural events by not implementing an immediate ban, and the delay wouldn’t create a “big difference” in the infection tally.

Asked by a reporter whether it was responsible for him to attend a rugby league match on Saturday featuring the Cronulla Sharks, Morrison said the advice he’d received said there was no significant risk in not limiting mass gatherings immediately.

“The fact that I would still be going on Saturday speaks not just to my passion for my beloved Sharks — it might be the last game I get to go to for a long time,” he said. “That’s fine. In the future I suspect we might be watching them on television, and that’s okay as well. My point is that there is absolute reason for calm and proportionately responding to the challenges that we have here.” 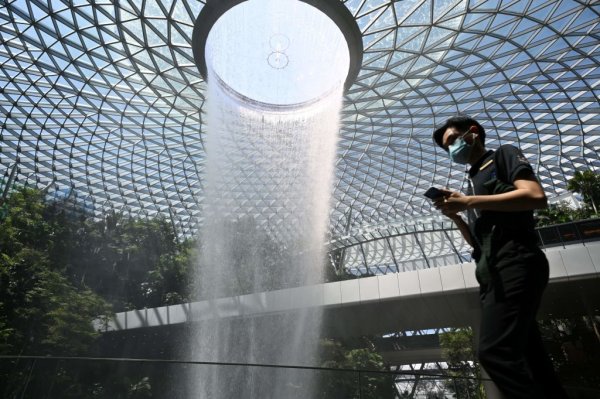 What We Can Learn About Coronavirus From Abroad
Next Up: Editor's Pick