A U.S. flag flies at a Japanese-American detention camp in Manzanar, Calif., in 1942
Getty Images
By Richard B. Frank

President Franklin D. Roosevelt’s infamous February 1942 Executive Order 9066, authorizing the internment of approximately 120,000 persons of Japanese descent from the West Coast — citizens and aliens alike — remains a tremendous blight on the nation’s history. Yet, virtually unremembered is that on March 13, 1942, Roosevelt issued an order that could have led to the evacuation and ultimate internment of 160,000 persons of Japanese descent from what was then the Territory of Hawaii. (Statehood came in 1959.)

But that order was thwarted, thanks to a combination of circumstances and individuals. This moment offers a valuable reminder that the lessons of history are found not only in events that happened, but also in those that never came to pass.

Following the Pearl Harbor attack, the U.S. Army placed Hawaii under martial law with suspension of the writ of habeas corpus. Military authorities thus wielded tremendous powers over all aliens and citizens never duplicated on the West Coast. Fears of an actual Japanese invasion there were soundly grounded. Admiral Isoroku Yamamoto, the architect of the Pearl Harbor attack, planned to annihilate American aircraft carriers at the Battle of Midway and then seize the Hawaiian islands and use their civilian population of over 460,000 as a bargaining chip to secure a quick negotiated peace. In addition, the Roberts Commission Report on Pearl Harbor had publicly branded persons of Japanese descent on Hawaii as disloyal. Although the Commission received conflicting testimony, they chose to include in their public report only language implicating persons of Japanese descent in aiding the Japanese attack. The historian David Kennedy has identified this portion of the Roberts Commission Report as the “decisive blow” leading to the West Coast internment. Editorial opinion had run about five to one favoring fair treatment of the Japanese prior to the Roberts Commission report. After its publication, editorials dramatically pivoted to six to one against.

In Washington, Navy Secretary Frank Knox and the President were set to treat Hawaii’s Japanese population the same way as their mainland counterparts. Serious examination fell upon schemes that either the Japanese could be uprooted from Oahu and relocated to another island or alternatively shipped to camps on the mainland. But the size of Hawaii’s population of Japanese descent, numerically and proportionately, created diverse tugs on wartime policies. Extensive pre-war investigations convinced local Army and FBI authorities that they had identified those of suspect loyalty. Further, General Walter Short, the Army commander prior to Pearl Harbor, had announced that so long as they remained loyal, the Japanese population would be treated fairly. Short’s replacement, Lt. Gen. Delos C. Emmons, reaffirmed this policy on Dec. 21, 1941, after a careful investigation confirmed there had been no act of sabotage and only one act of disloyalty on the small island of Niihau Island, where a Nisei (first-generation born in the U.S.) husband and wife had aided a downed Japanese pilot. The local Hawaiian population killed the pilot in an altercation and the Nisei husband committed suicide. Local U.S. authorities rightly dismissed the possibility that this event was evidence of a larger pattern of disloyalty.

Other factors also played important roles in preventing internment in Hawaii. First, Gen. George C. Marshall, the Chief of Staff of the U.S. Army, informed Gen. John J. DeWitt, the Army’s West Coast commander, that a mass evacuation of Japanese citizens and aliens from Hawaii might impose shipping demands that would damage the urgent war effort by diverting men and materials. Then there was the relatively tolerant racial climate in multi-ethnic Hawaii and the key role people of Japanese descent — about a third of the total population — played in the local economy. Moreover, while the proportion of persons of Japanese descent was incomparably higher in Hawaii than on the West Coast, the reinforcements rushed to the islands had radically changed the ratio between persons of Japanese descent and soldiers. By June 1942, the Army garrison alone numbered 122,000 men (i.e. not counting sailors or Marines), about one soldier for every four civilians.

But in this story the real unsung hero is Emmons. Historians who have examined his conduct concluded that while Emmons gave lip service to the need for an evacuation, he really staged a shrewdly calculated deliberate delaying action, raising one obstacle after another to any mass evacuation scheme. This required no small degree of moral courage. His predecessor, Gen. Short, had been relieved of command after Pearl Harbor and vilified for his failures. If Emmons had been a soldier of lesser character, he might have sought to win favor and elevation in rank or position by appearing a willing hand implementing the orders from Washington. The path he followed carried no small risk of having his career blighted or ended by obstructing Washington’s plan. But he held to his course of preventing mass evacuation. He was also fortunate. The U.S. Navy’s victory at the Battle of Midway in June 1942 lifted the threat of invasion. By July, Emmons proclaimed the conduct of Hawaii’s Japanese population was “highly satisfactory.” In the end, after scaling down the target figures drastically, Emmons transferred only 1,875 Hawaiian residents of Japanese ancestry to the mainland—protecting the other 98%.

Sometimes it is not the path history takes but the one not taken that teaches the most important and enduring lessons.

Richard B. Frank is the author of the recently published Tower of Skulls: A History of the Asia-Pacific War, July 1937-May 1942. 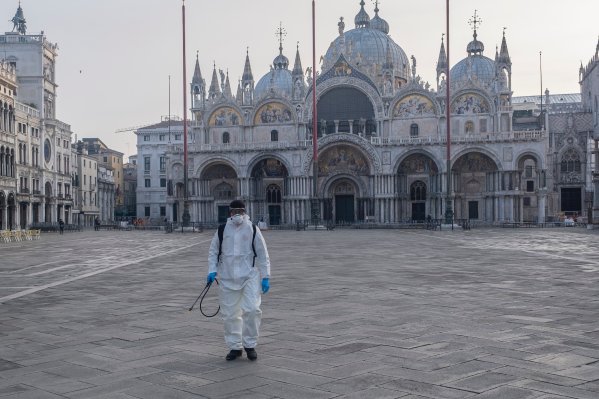 I’m a Historian of Epidemics and Quarantine. Now I’m Living That History on Lockdown in Italy
Next Up: Editor's Pick