We finally have some clarity about the athlete of the year who deserves to win the internet’s hearts before the 2020 Olympics even begins and it’s a sprinting toddler.

A kid has gone viral after deciding to run away from his first wrestling competition with the utmost relatable approach to a high-stakes situation.

The clip of the 2-year-old Jeremiah showing the intense standoff between the two pint-sized contenders was shared to Twitter this week, where it has been viewed 5 million times. “Wrestle J,” a woman who is presumably his mom can be heard saying. And at that, “J” decided to opt out of the match entirely, prompting an emotional reaction from the crowd.

He did, however, have second thoughts and returned to the match, but still decides against wrestling. A subsequent tweet reveals there may be more than one rematch for these two.

Jeremiah’s quick exit continues to collect plenty of admiration and awe from the Internet where it was born to be shared.

This move, truly, it’s exceptional. He may not have won the actual sports competition portion of this match, but we don’t need a referee to tell us that his run across the full length of the gymnasium is trophy-worthy. Run like the wind, Jeremiah. 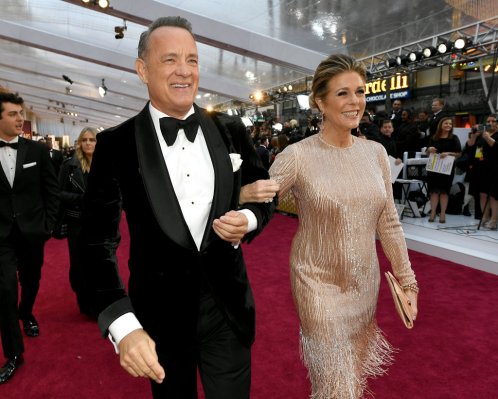 Tom Hanks and Rita Wilson Test Positive for COVID-19
Next Up: Editor's Pick