Sanders and Biden to Face Off in Debate on Sunday, Amid a Winnowing Primary and COVID-19. Here's What to Know

What a difference a few weeks can make. Since the last Democratic presidential debate on Feb. 25, former Vice President Joe Biden has emerged as the party’s presidential primary front runner, cementing a clear path towards his nomination. Only Vermont Sen. Bernie Sanders remains a viable opponent to the former Delaware senator, and his candidacy took a major hit when Biden won the delegate-rich Michigan primary on Tuesday.

On March 15, Biden and Sanders will face off in a one-on-one debate unlike any this election cycle. Because of the spread of COVID-19, the disease caused by the novel coronavirus, the eleventh and penultimate Democratic presidential debate won’t have an audience and will take place in Washington D.C. And instead of the usual packed stage, it will feature just two men, each making the case for their ideological wing of the Democratic primary.

The debate was supposed take place on Sunday in Phoenix, Ariz., just days before the Arizona primary on March 17. But on Thursday, the Democratic National Committee (DNC) announced that they were moving the debate to Washington D.C. “out of an abundance of caution and in order to reduce cross-country travel.”

CNN and Univision will still co-host the debate in partnership with CHC BOLD, the political action committee linked to the Congressional Hispanic Caucus. It will air live from 8 to 10 p.m. ET from CNN’s studios in Washington D.C.

Biden will come into the debate with momentum; his winning streak continued on Tuesday when he won the Idaho, Mississippi and Missouri nominating contests as well as the Michigan primary, which Sanders won in 2016. On Wednesday, Sanders said he did not plan to drop out the race, and would debate Biden on Sunday as scheduled.

To qualify for the debate, candidates had to receive at least 20% of the total pledged delegates allocated by 9 a.m. ET on March 15. This will be the first debate where candidates don’t need to reach certain polling numbers. The new requirement will likely exclude Hawaii Rep. Tulsi Gabbard, who has 2 delegates to Biden’s 864 and Sanders’ 710, as of Thursday.

CNN’s Dana Bash, CNN’s Jake Tapper and Univision’s Ilia Calderón will co-moderate the debate. Univision’s Jorge Ramos was also scheduled to co-moderate, but on Thursday the DNC announced that he “was in proximity with someone who was in direct contact with a person that tested positive for coronavirus” and out of “an abundance of caution” he decided to not participate; Ilia Calderón will represent Univision in his stead.

“While our campaign has won the ideological debate, we are losing the debate over electability,” Sanders said during a press conference on Wednesday. Some people on social media have theorized that Sanders may take Sunday as a last chance to advocate for progressive policies on a national platform before dropping out of the race. Lonna R. Atkeson, a professor of political science at the University of New Mexico, also points out to TIME that as long as Sanders stays in the race, he forces Biden “towards more left policies.”

Atkeson adds that “things just change so quickly these days” she wouldn’t say a Sanders comeback is entirely impossible. It’s not over until it’s over.

Here’s what to know about the March Democratic debate.

When is the next debate?

The March Democratic debate will take place at CNN’s studios in Washington D.C. on March 15, just days before the delegate-rich states of Arizona, Florida, Illinois and Ohio hold their primaries.

The debate will air live from 8 to 10 p.m. ET on CNN, CNN en Español, CNN International and Univision. It will also air live on CNN.com’s homepage without requiring a cable login, as well as CNN’s mobile app, smart TV apps and Univision’s digital properties.

Univision’s Ilia Calderón, CNN’s Jake Tapper and CNN’s Dana Bash will moderate the debate. Tapper and Bash co-moderated the second Democratic debate together back in July.

Which candidates have qualified?

What began as the most diverse presidential primary in U.S. history has narrowed to a contest between two white men in their late seventies. However, if he wins, Sanders would be the first Jewish presidential nominee of a major American political party.

To make the debate stage, candidates have to be allocated at least 20% of the total pledged delegates available by 9 a.m. ET on March 15. Hawaii Rep. Tulsi Gabbard — the final woman and person of color in the race — could technically still qualify, but it will be impossible for her to get enough delegates by the March 15 deadline. She only has two delegates so far, to Biden’s 864 and Sanders’ 710, as of Thursday.

Here are the two contenders:

Biden served as President Barack Obama’s Vice President from 2009 to 2017 and represented Delaware in the Senate from 1973 to 2009. He also ran for the Democratic presidential nomination in 2008 and 1988.

Sanders served as Vermont’s sole congressional representative from 1991 to 2007 and has represented Vermont in the Senate since 2007. The self-described democratic socialist ran for the 2016 Democratic nomination and lost to former Secretary of State Hillary Clinton.

How has the race changed since the last debate?

Just a month ago, many thought Biden’s run was almost over after he came in fifth in the New Hampshire primary. But not everyone foresaw how swiftly the Democratic establishment would rally around him, some propelled by their fear that a Sanders ticket could hand the race to President Donald Trump.

“Leading into the last debate, the race was very fluid. Sanders had emerged as the candidate on the left wing of the party, but Democratic voters had not settled on a moderate candidate,” Stephen Ansolabehere, a professor of government at Harvard University, writes TIME in an email. Former New York City Mayor Mike Bloomberg had seemed like a viable option, and has certainly spent enough money to not be discounted. But multiple bad debate performances “halted any momentum Bloomberg was gaining through February,” Ansolabehere explains.

Then, on Feb. 29, the former Vice President swept the South Carolina primary, earning 39 delegates and recharging his campaign. This resounding win “spelled the end of the campaigns for two of his main rivals,” former South Bend, Ind., Mayor Pete Buttigieg and Minnesota Sen. Amy Klobuchar, Ansolabehere writes. They both dropped out and endorsed Biden, as did former candidate and former Texas Rep. Beto O’Rourke. Biden rode that momentum into Super Tuesday and performed surprisingly well, taking states like Texas and Minnesota that some expected to go to Sanders. (The last minute endorsements from Klobuchar and O’Rourke likely helped). Sanders still won the delegate-rich state of California as well as Colorado, Utah and Vermont.

Bloomberg dropped out of the race after his Super Tuesday loss and endorsed Biden. On March 5, Massachusetts Sen. Elizabeth Warren — who most viewed as the last viable female candidate — also dropped out of the campaign. She has yet to endorse anyone.

“Without another debate before or immediately after Super Tuesday to change the media focus, Sanders has been forced to watch his support wither while Biden has been accumulating accolades and endorsements,” Barry Burden, a professor of political science at University of Wisconsin-Madison, writes TIME in an email.

As the primaries have ticked forward, the bases of the two candidates have also come into focus. Biden’s appeal among African American, moderate, and older voters has become clear, as has his popularity with the Democratic establishment. Sanders’ grassroots campaign — energized by young people across the U.S. — has expanded to include a large number of Latino voters.

On Sunday, they’ll each make their case for why they’re best suited to assemble a broad enough coalition to defeat Trump come November.

What issues are Joe Biden and Bernie Sanders likely to clash on at the debate?

Since there’ll be only two candidates, the moderators will have more time than in the past to raise a variety of topics. The two men also effectively represent the opposing wings of the Democratic Party, and will have plenty to debate.

Give the spread of the coronavirus throughout the U.S., Lonna Atkinson predicts that their differences on health care — Sanders supports Medicare for All while Biden does not — may get extra attention. Health care is one of the most important issues for Democratic voters, and Sanders and Biden have sparred over it in previous debates. Atkinson adds that the threat of the novel coronavirus could also move the discussion away from individual health and turn focus onto public health.

Brooks Simpson, a professor of political history at Arizona State University, predicts that Sanders will try to “pin Biden down” on “a largely domestic agenda with global implications:” wealth and income inequality, healthcare, climate change, criminal justice reform, and free tuition for college. He predicts Biden will counter with more moderate proposals as he begins to pivot towards the general election. Simpson adds that immigration is a key issue in Arizona — which will still be a crucial primary even though it’s no longer the location of the debate — and “voters will want to hear what both men have to say on that issue.”

Sanders’ comments on Wednesday also suggest that the two men may not get as combative as they have in previous debates. “I very much look forward to the debate… with my friend Joe Biden,” Sanders said at a press conference on Wednesday, before listing a series of questions that he plans to ask the former Vice President.

As Mia Costa, a professor of government at Dartmouth College tells TIME, Sanders appears to view Sunday’s debate as a “last-ditch effort to highlight the ideological differences between him and Biden.”

Ansolabehere of Harvard also theorizes that their discussion could begin to shift towards Trump, since Biden’s wins in Michigan and Missouri suggest he’s close to securing the nomination.

What states will vote next?

On March 14, Guam and Northern Marianas will hold their nominating contests. Then, two days after the debate, the delegate-rich Arizona, Florida, Illinois and Ohio primaries will take place on March 17.

That could be a tough day for Sanders. According to RealClearPolitics’ polling average on Wednesday, Biden has a 42.5 point lead over Sanders in Florida polls. FiveThirtyEight’s polling averages as of Wednesday also found that Biden had 54% support to Sanders’ 36.6% in Ohio, 51.6% to Sanders’ 32.4% in Arizona, and 53.5% to Sanders 31.2% in Illinois.

But Sunday’s debate could have an impact on how March 17 turns out. Lonna Atkeson points to the impact of previous debates in 2020: Klobuchar performed surprisingly well in New Hampshire after a strong debate performance, and Bloomberg’s poor showing helped kill his chances on Super Tuesday. Debate ratings have also risen in 2020; nearly 20 million people tuned in to watch the debate on Feb. 19. If someone makes a gaffe — or makes a particularly strong case for their candidacy — it could sway voters.

How are candidates doing in the polls?

Biden has shot up in the polls since the last debate, propelled by his wins and positive media narrative. The rapid exit of multiple candidates who then endorsed him could also have helped shift support in his favor.

Here’s how the candidates are polling according RealClearPolitics national polling average as of Wednesday: 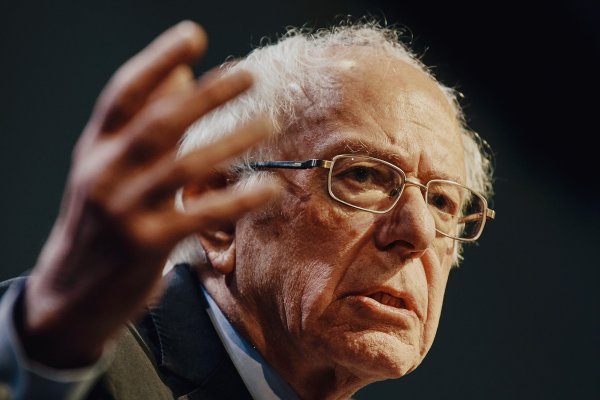 Why Thousands of Artists Are Supporting Bernie Sanders
Next Up: Editor's Pick