The Centuries-Old Debate Behind the Fight Over Sanctuary Cities

Painting, in the Wisconsin State Capitol, of 'The Signing of the American Constitution,' a mural by Albert Herter, 1910.
Getty Images
By Donald F. Kettl

When a court ruled in late February that the Trump Administration can deny grant money to localities that refuse to go along with its immigration policies, the President and his allies seemed to score a major point for their view of federal power. The long history behind this debate, however, means the real winner’s not so clear.

Trump’s tough stance on immigration helped propel him to the White House. In fact, 79% of his supporters said the issue was “very important” to them. The last thing he wants now is a group of blue-state cities sabotaging his message. But that’s just what scores of local governments, along with ten states, have done. They’ve declared themselves “sanctuary” communities, blocking their law-enforcement agencies from cooperating with the feds, especially the U.S. Immigration and Customs Enforcement Agency (ICE), and setting up a battle over just who gets to call the shots on immigration policy.

The boundary lines here might seem pretty clear: the Constitution makes immigration policy a federal responsibility. But there’s never been the will to give the federal government the full police power to back up its role. ICE has just 20,000 employees to deal with more than a quarter of a million cases per year, so it can’t do its job without state and local government support. When ICE identifies an individual it believes violated the law and needs to be deported, it puts the person on a “detainer” list, asks for local law enforcement to find and hold them, and then counts on local governments to hold them in jail until ICE comes to pick them up.

Trump’s immigration crackdown can’t work well without local government support, and the sanctuary city movement is throwing sand into the gears of his plan. It’s also created a magnet for bringing together the resistance to the president’s policies.

Conservatives are angry that liberals have been able to interfere with the President’s policy. But, 60 years ago, the sides were reversed, with conservatives fighting back locally against the efforts of Lyndon Johnson’s administration to push an aggressive policy on civil rights and urban renewal. Every time the U.S. finds itself in such a fierce conflict, one side tries to reach for a pen, dipped in the ink of the Constitution, to draw a bright line. And yet the line keeps moving.

Consider the boiling battles over health care, which have continued to rage since the passage of the Affordable Care Act ten years ago. With no consensus about how much power the federal government ought to have when it came to applying the law, much of the responsibility for making it work was given to the states. Red states have fought an ongoing guerrilla war to weaken the program. Texas led a coalition of 20 states challenging the program, which the Supreme Court just agreed to hear in the fall. Three states—Arkansas, Georgia and Missouri—banned state funding for health exchanges. Arizona went even further, with a bill prohibiting the use of “any personnel or financial resources to enforce, administer or cooperate with the Affordable Care Act.” Much of the way the program now works (or doesn’t) is the result of these skirmishes.

Trump has complained about blue-state sanctuary cities undermining federal policy. In one tweet, he threatened to place “Illegal Immigrants in Sanctuary Cities only.” But it’s no secret that he’s actively encouraged red-state governments to work to weaken Obamacare by, among other things, allowing them to offer less-generous protections. “The best thing we can do, politically speaking,” he has said, “is let Obamacare explode.” Not only isn’t there a bright line about where power really rests in America, but neither side has an interest in answering that question, because both sides have found ways of using the ambiguity to their advantage. Trump can’t push too hard against the sanctuary cities without undermining his allies in their efforts to pull Obamacare apart.

This is just how James Madison designed the system when he drafted the Constitution 230 years ago. But not everyone involved in the nation’s founding agreed. The ongoing battles of today — blue-state resisters using Madison’s tactics to resist President Trump’s immigration policy; red-state resisters using them to weaken President Obama’s signature legislation — are precisely what Alexander Hamilton feared most: a federal government that can’t weave the fabric of national policy because state and local governments are constantly pulling away at the threads. It’s ironic that Hamilton tickets still go for hundreds of dollars each at the time his warnings about American democracy—and his argument for a stronger federal role—go unheeded.

The great genius of the American system hasn’t been so much to contain conflict as to create boundaries to contain it. There’s a constant tug toward trying to shrink these battles by drawing lines or sorting out roles. But Madison didn’t make that possible. The price has now become clear: the government’s inability to frame and execute national policies.

Americans are rightly worried about gridlock in Washington. This battle is where the true Achilles heel of American democracy rests. We’re either going to need to solve the problem with a heavier dose of Hamilton than America has historically been willing to stomach—declaring once and for all that certain powers belong definitively to the federal government or to the states—or we’re going to need to content ourselves with more battles and fewer solutions for the big problems we face, along with less trust in government’s ability to solve them.

On Trump’s immigration battle, that would mean empowering the federal government enough to enforce the policies it sets, even if those policies run against the wishes of individual states. The alternative, for Trump’s opponents, is that they will be just as powerless on big issues down the line that they care about just as much.

Donald F. Kettl is the Sid Richardson Professor at the LBJ School of Public Affairs, University of Texas at Austin. He is the author of The Divided States of America: Why Federalism Doesn’t Work (Princeton University Press). 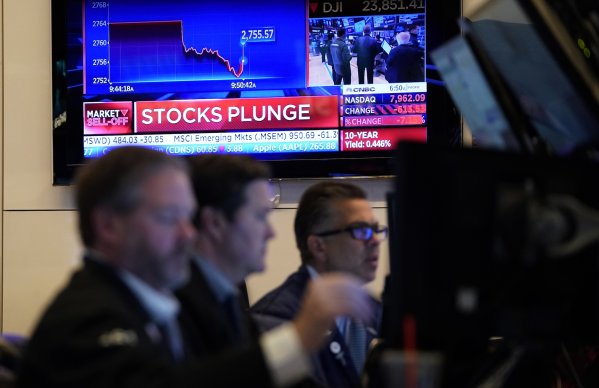 Before COVID-19, How Epidemics Affected the Economy
Next Up: Editor's Pick