Family of 3 Among Those Killed by Deadly Tennessee Tornadoes

A family of three was among those killed by a tornado that hit their town of Cookeville, Tenn., on Tuesday night, amid a storm that killed at least 24 people throughout the state.

Joshua Kimberlin, 30, his wife Erin Kimberlin, 29, and their son Sawyer, 2, were killed by the tornado that tore through Putnam County. Sawyer was the youngest victim of the storm, according to The Washington Post.

“They wouldn’t have wanted to live without each other,” Clint Pitts, Erin’s brother, told The Post.

As of Saturday, a GoFundMe to cover their funeral expenses has raised over $65,000.

Throughout the state, the storm destroyed over 140 buildings and left over 50,000 homes without electricity. According to the Associated Press, Randy Porter, the mayor of Putnam County where the Kimberlins lived, said the storm hit so fast most people didn’t have time to take shelter.

According to his obituary, Joshua had been an “avid fisherman, kid at heart, was alway making people laugh and forever will be a Jedi.” Erin’s obituary said she was “known for always having a plan and she planned and prepared for eternity with her Lord in heaven.” Their son Sawyer loved “congregational singing, he even had his own podium, pitch pipe, microphone and songbook,” according to his obituary.

The Tennessean reports that the Kimberlin’s house was completely destroyed, and community members have been finding belongings from a number of people’s homes scattered over town. One of the items that’s been found was a photograph of Joshua and Erin Kimberlin walking together on railroad tracks, holding hands. 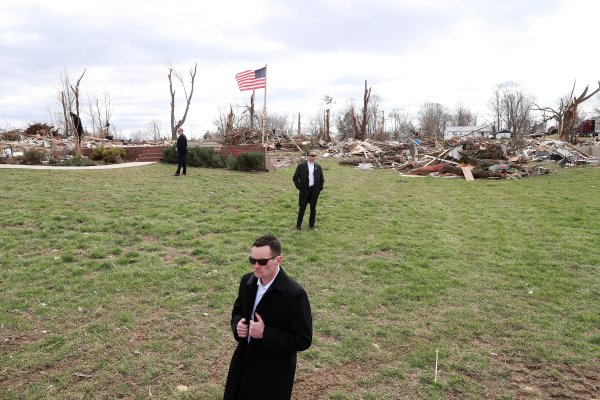 Survivors Grapple With Aftermath of Tennessee Tornadoes
Next Up: Editor's Pick