'What More Does a Woman Have to Do?' Elizabeth Warren's Donors Share Their Frustrations With Her Exit

It wasn’t until August 8th, 2019, months into the unofficial start of the Democratic presidential primary, that Naomi Zikmund-Fisher threw her money behind Elizabeth Warren. The 49-year-old social worker from Superior Township, Mich., had supported Vermont Senator Bernie Sanders in the 2016 primary. But in Warren, she saw something different: a candidate who had translated Sanders’ progressive talking points into tangible policies, and one who might actually win. She deposited $2,800 – the maximum donation an individual can give a candidate during a primary – into Warren’s campaign. “I thought she had a good chance,” Zikmund-Fisher says. “I gave to her, honestly, with the thought that she’s [going to] be the nominee, and let’s get her campaign off the ground right now.”

Zikmund-Fisher was one of nearly half a million women who contributed to Warren’s campaign with the hopes that she would become the Democratic Party’s nominee and the first female President. Now that she’s out of the race, those donors are frustrated with what the remaining candidates have to offer and have renewed questions about the ceiling for women in presidential politics. “I was surprised by how punched in the gut I felt on Tuesday,” Zikmund-Fisher says, recounting Warren’s losses in all 15 primary contests, including a third-place finish in her home state. “That’s just not good enough for the country. It’s 2020, and it’s not good enough.”

Despite the gains women have made in electoral politics over the years, political fundraising is still a largely male-dominated field. Even in Democratic circles, many of the most prolific fundraisers and donors have historically been male. Hillary Clinton’s nomination in 2016 was the first time women comprised more than half the donor pool for a major party nominee. Although data from the 2020 cycle shows the gender gap between male and female contributors narrowing, top male candidate—Joe Biden, Pete Buttigieg and Bernie Sanders—still received the majority of their contributions from male donors.

“The majority of the money in the primaries so far has come from men,” says Grace Haley, a gender and race researcher at the Center for Responsive Politics. “There are about the same number of men and women donors in total this election, but men are giving more money and giving more money to men.”

Warren’s campaign was an exception. Her campaign earned donations from 485,000 women, according to data compiled by Haley. About 54% of Warren’s donors were female, which Haley believes is a record for a major presidential candidate. While Sanders had a higher raw number of female contributors—549,000 as of January 31—they only comprised 39% of his total donor base. Hawaii Rep. Tulsi Gabbard, the only female candidate remaining in the race, has received funds from 49,000 female donors. Minnesota Sen. Amy Klobuchar, who exited the race on March 3, had 125,000 female donors – 51.3 percent of her total haul.

Kelly Dittmar, an associate professor at Rutgers University and a scholar at the Center for American Women and Politics, says that female political fundraising has proven another way for women to mobilize in the wake of Clinton’s loss in 2016. “Unlike in the past, when women said, ‘I’m going to give to causes, not candidates,’ we are slowly seeing a change. More women are saying, ‘Our cause can be the candidate,'” she explains. “That particularly seems to be the case with women candidates.”

In the day after Warren suspended her campaign on March 5, TIME spoke with a dozen of her female donors scattered around the country. Some, like Zikmund-Fisher, had donated the legal maximum; others gave $10. Some are undecided who they will support now that Warren is out of the race. Others have decided to support Biden or Sanders—often reluctantly. But every donor expressed the same frustration with what they felt was Warren’s sexist treatment during the race and what it reveals about the limitations for women on the political stage.

“When Clinton lost, I was heartbroken. When Warren lost, I was just angry,” says Camilla Simon, 27, a freelance digital marketer who lives in Tennessee. She voted for Warren in the Tennessee primary on March 3, only to see the Massachusetts senator finish a distant fourth. “To have her drop out and to face the fact that yet again women haven’t come far enough, [and] we’re being forced to choose between men, and especially old white men at that—it’s heartbreaking.”

Simon is now backing Biden. While she says she will ultimately support the nominee, whoever it is, she has been put off by the behavior of some of Sanders’ supporters. “The way [Sanders’] campaign and supporters have treated women, that’s just something I can’t look past,” she says.

Arlen Weiner, 29, a public health consultant in Massachusetts who made monthly contributions to Warren’s campaign, says she had been seriously considering running for office herself, but that watching this experience had discouraged her. “I see how women, and especially women running for president, have to be flawless,” she says. “Even when they’re one of the most accomplished women at the table, they just get swept aside.” Weiner plans on remaining neutral throughout the primary, although she may reassess if Warren comes out with an endorsement.

As Warren fell from front-runner to afterthought in recent weeks, some of her female donors saw their own struggles in the workplace. Emma Zuckerman, a 25-year-old technical designer in Baltimore who had never contributed to a campaign before Warren’s, recalled how frustrated she felt watching Warren’s polling numbers fall despite her command on the debate stage. “She was outperforming Biden and Sanders. It was pretty disappointing to see a woman in that position again, being pushed out,” she says. “That’s something that I see every day in social and professional situations.” Zuckerman is undecided about who she will support in Maryland’s April primary, although she is leaning towards Sanders.

“It was like, what more does a woman have to do?” says Cynthia Craig, a 67-year-old retired Italian professor at Michigan State University. “How much more better and prepared does she have to be to get the support she deserves?” Craig, who lives in East Lansing, says she will reluctantly cast her vote for Biden in Tuesday’s Michigan primary. Like Simon, she has been put off by some of the negativity coming from the Sanders camp.

With women seemingly out of contention for the Democratic presidential nomination, Dittmar now says that female political fundraising will face another test. “Does the pattern continue, even in this cycle, that women continue to give? I don’t know the answer, but I think it will help us sort out how much is enthusiasm around women candidates or a sense of urgency around current political leadership,” she says.

As for Zikmund-Fisher, the social worker from Michigan, she cast her vote for Sanders in Tuesday’s Michigan primary on the same day Warren dropped out. But she can’t bring herself to contribute to anyone else until the general election.

“I’m not voting for gender. I’m voting for a President,” she says. “But I think what happened to her is because of gender.” 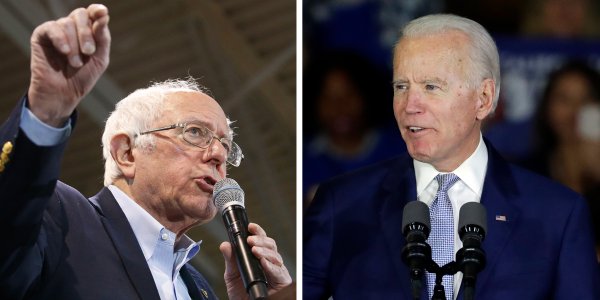 How Sanders Is Weaponizing Biden's New Donors
Next Up: Editor's Pick