Hulu's Hillary Clinton Docuseries Has Astonishing Access. If Only Its Subject Would Tell Us Something New

About a week before the Iowa caucuses, with 11 candidates still competing for attention on the national stage, some juicy political news broke out of a relatively unlikely place: Park City, Utah. In a biographical docuseries that premiered at the Sundance Film Festival, Hillary Clinton had not minced words when asked about Bernie Sanders, her chief competitor in the 2016 Democratic primary. “Honestly, Bernie just drove me crazy,” Clinton said in the doc. “Nobody likes him. Nobody wants to work with him. He got nothing done. He was a career politician. He did not work until he was like 41, and then he got elected to something. It was all just baloney and I feel so bad that people got sucked into it.” Framed as a rare morsel of real talk from a notoriously circumspect political figure, the quote briefly hijacked the headlines and inflamed social media.

The four-part series that caused the mini-furor is called Hillary, it debuts Friday, March 6 on Hulu—and it’s not nearly as incendiary as those who latched onto the Sanders sound bite might have hoped. Directed by Nanette Burstein (The Kid Stays in the Picture, Gringo: The Dangerous Life of John McAfee), it tells the story of Clinton’s life from her middle-class, Republican upbringing in the Chicago suburbs through the devastation she felt in the aftermath of November 8, 2016. Interspersed throughout the film are long passages that follow that campaign, the bittersweet culmination of her political career, from beginning to end. On hand with commentary are some of Clinton’s oldest friends; high-level staffers such as John Podesta and Jennifer Palmieri; a handful of journalists who’ve covered Clinton over the years; Democratic eminences like Barbara Mikulski, Barney Frank and even, in a short but thoughtful appearance, Barack Obama; and, of course, Bill and Chelsea Clinton.

But the core of Hillary is Burstein’s lengthy interview with the subject herself, who gives what amounts to an extended commentary track on seven decades of a life that has already been exhaustively documented. Clinton recounts the culture shock she experienced as an accomplished professional woman who was expected to impersonate a bland, supportive, traditionally feminine wife throughout her husband’s political career. Her memories of the anger she felt toward him for not only cheating on her, but lying to her and to America about it rings true. (Bill Clinton’s extended expression of remorse, for derailing Monica Lewinsky‘s life as well as for imperiling his marriage and presidency, is even more emotional. Viewers can decide whether this is genuine or just more of his signature empathetic oratory.) You can sense her frustration as she explains that it would’ve been impossible for her to confront Trump for invading her space on the debate stage without coming off as an angry woman.

“I am the same person I’ve always been,” Clinton says less than a minute into the series, after confirming her exasperation at media representations of her as inauthentic, unknowable or fickle. Her incrementalist philosophy—generally interpreted as heartless neoliberalism by those to her left and corrupt, man-hating feminism by the right—comes through loud and clear in Hillary. “You have to be willing to work within the system,” she says, looking back on the chaos of the 1968 Democratic National Convention, which coincided with her progressive awakening. “I was never in that camp that thought violence was the answer to violence.” Later, Clinton reflects: “I think the debate we sometimes have, all or nothing, is the wrong debate. How do we get something done in an environment that’s very partisan, filled with powerful special interests—and keep it going?”

The problem isn’t that she comes off as disingenuous so much as that people who follow politics (and in 2020, good luck avoiding them) have heard almost all of this before: Wellesley, Arkansas, Whitewater, Hillarycare, “women’s rights are human rights,” Monica, Senate, Obama, Benghazi, Trump. Even the context Burstein provides—on Clinton’s core beliefs, on her distrust of the media, on the right-wing obsession with her, on the infuriating forms of misogyny she has endured—will already be familiar to most people who would devote four hours to this story. Some especially fraught topics, like her use of the racially charged term “superpredators” in the ’90s and her initially tense relationship with Obama (remember “You’re likable enough, Hillary“?), get far less consideration than they deserve. Others, such as her slow-to-evolve positions on LGBTQ rights, barely merit a mention.

It’s possible no woman in American history has received as much journalistic attention as Hillary Clinton. She is the subject of dozens of biographies, partisan polemics, children’s books, even graphic novels. Clinton has given more interviews than there are stars in the sky and written no fewer than three memoirs—including 2017’s What Happened, her election postmortem. Her husband’s impeachment is endlessly re-litigated, most recently via the podcast Slow Burn and A&E docuseries The Clinton Affair. Last year, Laurie Metcalf portrayed a version of her in a Broadway show called Hillary and Clinton.

The one advantage Hillary has over the best of those works are many exclusive, behind-the-scenes clips from 2016, which Burstein and Hulu inherited from the campaign itself. We get to see Clinton and running mate Tim Kaine whisper about Trump’s Russia connections, aides rip into Bernie’s form of populism, a plane full of staffers comforting Clinton’s protégé Huma Abedin after Huma’s husband Anthony Weiner embroils himself in a new sexting scandal. Unfortunately, the decision to scatter that footage and related commentary throughout the larger biography—creating a somewhat confusing set of parallel chronological narratives—makes it hard to feel immersed in a campaign whose inner workings really are a topic of curiosity.

The final episode of the series is titled “Be Our Champion, Go Away”—taken from an interviewee’s observation about how the American public has flip-flopped on Clinton over the past three decades. Like so much else in Hillary, that appraisal is correct, discouraging and relatable but also pretty obvious for a culminating insight. As it happens, I don’t need Hillary Clinton to go away. I just wish she’d tell us something we don’t already know. 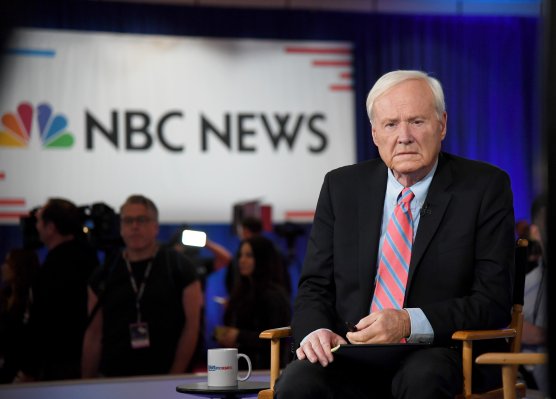 As Chris Matthews Departs, It's Time to Rethink Cable News
Next Up: Editor's Pick