Jill Biden and a senior advisor to Democratic presidential candidate Joe Biden are being lauded for their quick reflexes Tuesday night.

The animal rights organization Direct Action Everywhere took credit for the protest on social media, posting on Facebook that the protestors, Sarah Segal and Ashley Froud, belonged to the group’s Los Angeles branch.

“The protest was intended to draw attention to the inherent violence of the dairy industry,” a spokesperson for Direct Action Everywhere tells TIME over Twitter DM. “We targeted Biden’s rally because the Biden campaign has prominently featured appearances by former U.S. Secretary of Agriculture Tom Vilsack, who now receives a million-dollar salary as CEO and President of the U.S. Dairy Export Council.” (Vilsack served in the Obama Administration and publicly supports Biden.)

The spokesperson also writes that the group targeted Biden because of his historic support of the Farm Bill, arguing it has “authorized hundreds of billions in animal ag subsidies while rejecting activist requests to prevent handouts to millionaires and billionaires. All of this while almost never saying a word about the needless suffering farm animals.”

Anti-dairy protestors with Direct Action Everywhere have crashed a number of recent political events, including a Feb. 16 rally for Vermont Sen. Bernie Sanders and an event for Massachusetts Sen. Elizabeth Warren on Monday.

According to USA Today, Biden does not currently have Secret Service protection and was only granted a U.S. Secret Service detail up to six months after he left office.

But for now, it appears the women close to him are doing a good job doubling as bodyguards. At Biden’s rally Tuesday night, the first protester appears to have been stopped by a security guard. Then, as a second protester took the stage, Jill Biden and Symone Sanders jumped into action: the former second lady appears to have grabbed the protester’s wrists, while Sanders grabbed the protester around the waist and dragged her away.

Patrick T. Fallon, a freelance photographer on assignment for Bloomberg News, snapped a photo of the moment and tells TIME the it didn’t last more than 30 seconds. He said once it was over, the Bidens continued on “without missing a beat.”

Fallon, who has been working as a photographer for about 15 years, says “you never know when an image is going to resonate with someone.” He added that he sent the photograph to a couple of friends and they immediately loved it.

“Sometimes just a still image can capture more attention in an impactful way,” he says.

Jill Biden hasn’t posted about the moment on social media. Sanders, for her part, tweeted simply: “I broke a nail. #SuperTuesday.” 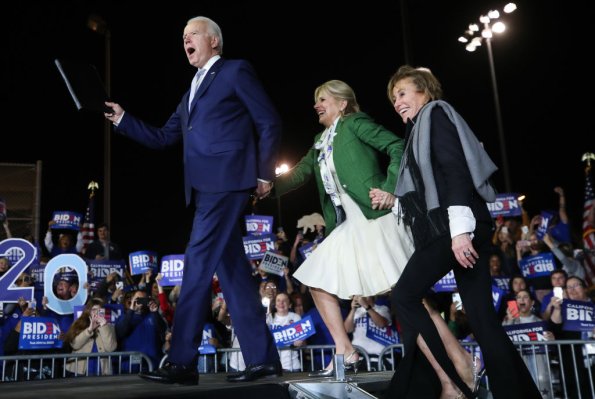