His country is struggling to cope with the influx of more than 1.7 million refugees who have fled the political and economic crisis in neighboring Venezuela, but Colombian President Iván Duque was given a new directive on Monday during a visit to the White House: step up the war on cocaine. President Donald Trump told Duque that Colombia, the world’s largest producer of the drug, should resume spraying herbicide on coca crops from the air to stem the flow of narcotics into the U.S. “You’re going to have to spray,” Trump told Duque at a joint press conference. “If you don’t spray, you’re not going to get rid of them.”

All aerial spraying was halted by the Colombian government in 2015 after the World Health Organization linked glyphosate-based fumigation to cancer. Since then the country has relied on eradication teams that rip the coca crops out by hand—last year the government destroyed 247,000 acres of coca crops that way—funded partly by $400 million from the U.S. But overall production spiked after spraying stopped, and Colombia is working toward resuming aerial spraying with the same herbicide under new safety conditions set by the nation’s constitutional court this year.

The twin crises—surging coca production and the massive refugee crisis—are just two of the challenges faced by Duque, 43, a U.S.-educated technocrat who in 2018 became the youngest elected President in Colombia’s history. Rolling back coca production, Duque says, is key to providing stability to his South American nation, which struck a landmark peace deal in 2016 with the country’s main rebel group, Revolutionary Armed Forces of Colombia, or FARC. (The Marxist guerrilla group was in control of an estimated 70% of Colombia’s coca crops when it disbanded.) At the same time, Duque is managing the rising political and economic costs of the massive humanitarian crisis in neighboring Venezuela which continues to spill across the border into his country.

After his visit at the White House with Trump and various cabinet members, Duque sat down with TIME. Following is an edited and abridged transcript of the conversation.

The President mentioned aerial spraying today. Were you caught off guard by that?

No, we definitely have considered since Day One the possibility of having aerial spraying. But we see it not as a silver bullet. We see it as a very important tool within a toolkit where we have manual eradication, substitution, alternative development. And obviously precision aerial spraying, considering all of the environmental and social precautions that we have to take to follow the constitutional court ruling, for us is important.

There are many places in the country where we have landmines, or snipers that will attack the people who are doing the eradication work. And you can see by the records that once the aerial spray program was stopped, basically the production of coca skyrocketed. It grew exponentially year over year, and actually it was in our administration the first months that for the first time in eight years we got the exponential growth to stop.

It’s taking a lot of effort to get the reduction. So that’s why having as much tools as possible is so important for us.

When do you think that’ll begin again?

We’re working very, very hard to have it as soon as possible.

What do you need from the Trump Administration to get there?

We have been analyzing not only the military, but the logistical, intelligence, and satellite support that we have received until now. But also it is good that we see those areas where you have the legal crops with the possibility of changing to other crops that are going to allow the peasants to get a sustainable income over time. So there’s a great interest to have a program in Colombia that allows those peasants to move to alternative crops. There’s cocoa, there’s fruit, or other crops, or even the payment for environmental services. But be able to get those people to move to a different legal and sustainable income.

What’s the biggest challenge you see there in bringing those numbers down?

It’s acceleration. Knocking down those numbers is the most important thing that we can do in order to limit the capacity of the [rebel] groups, and also destroy the structures they have. Those guys are killing social leaders in many areas of Colombia because the social leaders are telling the community not to be recruited by those groups. So we have to downsize severely and rapidly those numbers. And by that I’m sure that we will protect social leaders’ lives, and we will prevent that those groups become influential politically speaking in towns in Colombia that are close to the Pacific Basin.

So this is a must. This is the most important moral battle that I have embraced since I took office. And I will continue to move forward.

The UN just issued a report about some of the social leaders that you were talking about. And it criticized your government about how you were going about that. What’s your response?

There was a report that came out from the Office of the High Commissioner of Human Rights. I don’t have any problem where there’s criticism. And especially when the criticism is based on facts. Some statements are not based on facts, and that should generate the right debate. I worked on the United Nations, and I think it is good that sometimes there’s a discussion of things that are said in those reports. But for example, that report made the reference on the productive projects in the areas that we call alternative development or regional focused development plans. We have a contradiction because the verification that the U.S. does in Colombia on those projects is saying that there has been a tremendous progress. And then you see the report saying there’s no progress.

And in terms of the social leader killings, since I took office, and in my oath of office speech, I said that was one of the major challenges we face. And I have also said that we have to act rapidly and integrally. We launched an action plan to respond. We have been in the territories doing individual and group protection. We have seen some of those numbers come down. I don’t feel happy about a reduction of ten, fifteen, or sixteen percent because it has to go to zero. But we have made progress. And I think the report was not fair enough recognizing the efforts that we have done.

Can you tell us a little bit about the nature of the conversation with President Trump and whether he was asking for anything in particular?

We have been working together for a long time in different fronts. Colombia has 1.7 million Venezuelan migrants that have reached our country in the last three years. That’s the most dramatic migration crisis we have seen in recent Latin American history. Colombia is spending almost $1 billion per year in health, education, attention, nutrition and early childhood nutrition attention [for Venezuelan migrants]. And we’re getting five thousand people per day. So this is really a crisis.

What has triggered the crisis? A dictatorship that has brutalized the country, that has destroyed the economy, that has destroyed free press, and that is having people dying out of hunger. You have a minimum salary that doesn’t even get to $2. And you have a minimum salary in Colombia that is $300. So there’s always that incentive to move to Colombia or to Peru just to find opportunities.

But we need to do something on the cost. Because the capacity of our countries to absorb such a shock is not permanent. And it’s definitely not sustainable. So I think the coalition that we have built that has recognized [Venezuelan opposition leader Juan] Guaidó [and] has recognized the assembly, I think the coalition needs to get stronger, and that there has to be all the pushes that are necessary so that we have that transition taking place.

And when you compare the situation in Venezuela to other migration crises, you’ll see that the amount of resources that have been mobilized to attend the Syrian migration crisis, it’s in the thousands per migrant. In the case with Venezuela we haven’t even gotten to $118. So we also need the international community to be aware and to mobilize those resources. And I’m thankful with the United States because through USAID we have received funds, we have received medicine, we have received support, we have received The [USS] Comfort, the ship that has provided medical attention to migrants.

I genuinely believe that President Trump has taken a strong and necessary stand for this situation. But I also see it as something positive that there is bicameral and bipartisan support in the United States to build that transition in Venezuela.

What is the Trump Administration asking Colombia to do?

This is not an issue that can be solved by an individual country. This solution involves us all. And what I highlight about the way we have been managing this situation is that we have built the strongest coalition ever in Latin America, diplomatically and politically speaking, to fight a dictatorship. We never saw something of this nature in the ‘70s, ‘80s, the ‘90s. This is really a massive diplomatic coalition.

I think we really have to strengthen the coalition and keep on expanding the coalition. We have to identify more sanctions that really hurt bad the dictator and his inner circle, and we need to acknowledge that the change has to be made and it has to be made fast. Otherwise the massive humanitarian crisis is going to be out of control.

Did you get assurances today that more sanctions would be coming?

We will keep on evaluating them. As I say, this is not a meeting just to say, ‘Okay, you must do this, you must do the following.’ No, it’s a meeting where we evaluate what are things happening, and how have we worked to make things even better, and how we call other countries and how we work in the multilateral arena. But it’s important for all of us to know that this is an issue where the clock is ticking. We have already 3% of our population or more in migrants. We need to mobilize resources from the international community.

Can you wait until after the U.S. presidential election for the increase in pressure that you’re hoping to see on Venezuela?

I’d rather not to make any comments on U.S. elections and timing regarding elections. What I see really, and I think it has the value, is that the position the U.S. has taken on Venezuela is bipartisan. There’s a strong leadership by the White House and President Trump that we praise, and there is a big leadership that we have also seen in congress to approve bills or decisions that are helpful for the Venezuelan people. So all I can say about this is we need to work fast and jointly, not just about Colombia and the US, the whole coalition so that we can get that free election and that transition taking place in Venezuela. 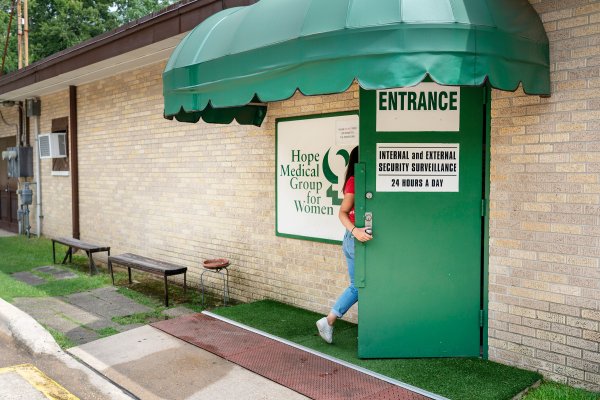 This Abortion Case Could Impact Women for a Generation
Next Up: Editor's Pick