The state of California said Monday that 43 companies reported they did not appoint a woman to their corporate board by the end of last year, as required by a 2018 law. A further 300 companies failed to disclose their status.

The California Secretary of State did not identify the 43 companies that reported they were not in compliance with the law among a list of 625 companies published Monday on the agency’s website. It’s not yet clear whether the companies with female directors that did not provide information are in violation of the law, the agency said.

If any companies are ultimately fined for missing the quota or not reporting, it would mark the first such regulatory action in the U.S.

California lawmakers passed the bill in 2018 requiring all public companies based in the state to have at least one female director by the end of last year. The first violation of the law carries a $100,000 fine, and each subsequent year is $300,000. At the end of 2021, the law requires companies with five directors to include at least two women, and those with six or more to have at least three women. The secretary of state can’t comment on many aspects of the regulation because the state is being sued over it.

Most companies lacking women on their boards went into recruiting mode after the law was enacted. Since then, women accounted for about 45% of new board seats among Russell 3000 companies based in California, compared with about 31% nationwide, according to data compiled by Bloomberg.

Among the 300 companies that the state report indicated didn’t complete the regulatory paperwork were Adobe Inc., Ebay Inc., Facebook Inc. and Netflix Inc., all of which do have women on their boards. A total of 282 companies, including Apple Inc., Chevron Corp., Intel Corp. and Twitter Inc., explicitly said they were in compliance with the requirement, according to the report.

The women added to boards are challenging a deeply held belief within boardrooms. Diversity quotas were opposed by 83% of all corporate directors, including more than half of the women surveyed, according to research last year from PricewaterhouseCoopers.

Some opponents of the law are taking their arguments to court. California’s secretary of state has been sued over it twice, first by state taxpayers who called the requirement unconstitutional and then by a shareholder of a California-based company who argued it’s discriminatory. Hearings in March are set to weigh whether the lawsuits can move forward, a process that could last years.

And not all groups are satisfied with the progress of the California law. In a report Monday, the Latino Corporate Directors Association said only 3.3% of women who have been selected to California boards since the law was signed have been Latinas, a fraction of their percentage in the state, where 39% of all residents are Hispanics.

So far, many boards have added new seats for women, said Dottie Schindlinger, executive director of the Diligent Institute, which tracks corporate governance trends. Rather than displacing men from existing board seats, the law has, she said, “simply added more women to the picture, which is not necessarily a bad thing.”

Most companies are moving forward as if the law will be strictly enforced, said Vincent Intintoli, a researcher from Clemson University, who studied the effect of the California law with other academics from his school and the University of Arizona. To get to the three-women requirement by the end of next year, another 1,000 directors may be needed, Intintoli said.

California frequently sets legislative trends, but most states are waiting to see how the new law plays out in the courts. Illinois and New York have opted for diversity disclosure rules instead of quotas for now. Legislators in Hawaii, New Jersey and Washington have introduced bills this year that would add quotas, but the efforts are in early stages, according to the National Conference of State Legislatures.

Keith Bishop, a former financial regulator in California, said state officials were aware that the law was vulnerable to a legal challenge. “Other states recognize that,” said Bishop, now a corporate lawyer at Allen Matkins. “Whether the law is ultimately upheld or not, I think it’s had an effect.” 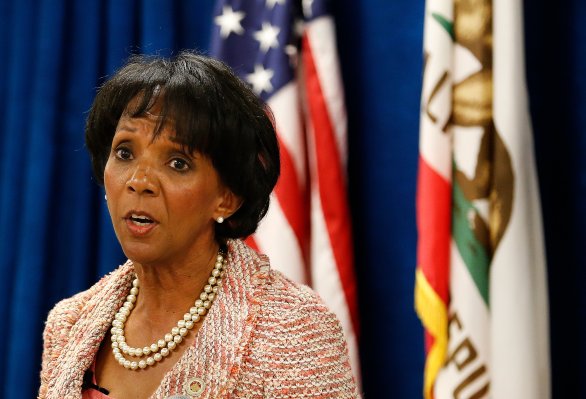 Activists Held a Protest Outside L.A. County's District Attorney's House. Her Husband Threatened to Shoot Them
Next Up: Editor's Pick